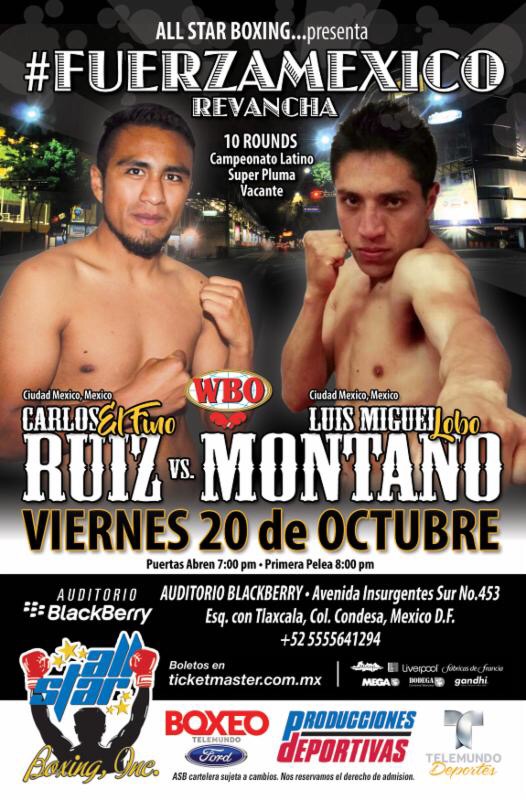 Mexico City, Mexico: After all out war between Lozano and Rodriguez in last Friday season opener, BOXEO TELEMUNDO fall season continues this Friday, October 20 from the Auditorio Blackberry in Mexico City, Mexico.

The main event will feature Carlos “Fino” Ruiz in a rematch bout against Miguel “Lobo” Montano in a civil was schedule for 10 rounds with the vacant WBO Latin Jr. Lightweight Title up for grabs. Ruiz, from Mexico City is a former WBO Latin Champion, he won the belt in Argentina against world ranked contender Raul Centeno and made two title defenses. In his last fight he lost a local and controversial decision against undefeated Deiner Berrio last December in Cartagena Colombia and kept his record at 15-3-1-5 KO’s. Montano, also from the capital of Mexico is looking for revenge, on June 21, 2014 he fought a all out war with Ruiz coming up short in the decision of the judges and losing a split decision in 8 rounds in a fight him and his believed he was removed from victory and have been looking for the rematch ever since. He has lost only once in his last 6 fights, in his last fight September 9 he beat compatriot Virgilio Ramirez by KO in 2 rounds to improve his record to 12-6-6 KO’s.

In the co feature bout Omar Solano (8-1-2 KO’s) of Mexico City will face undefeated countryman Luis Daniel “Pinturas” Flores (4-0-3 KO’s) in a fight schedule for 8 rounds in the superfeatherweight division.