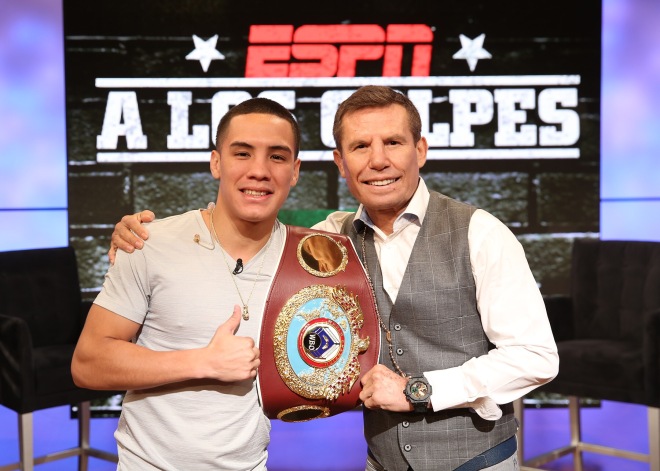 ON PACQUIAO VS. VARGAS CARD 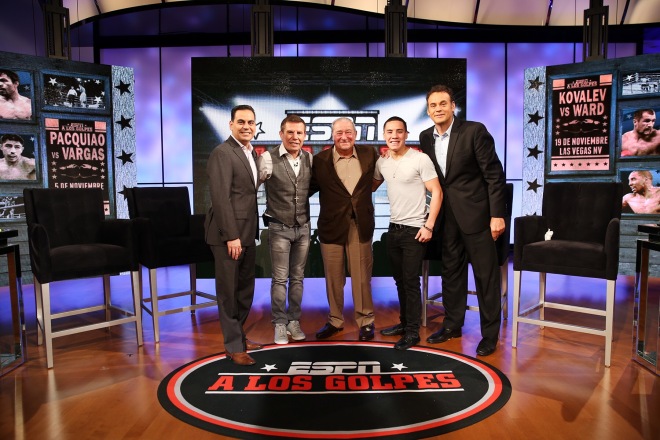 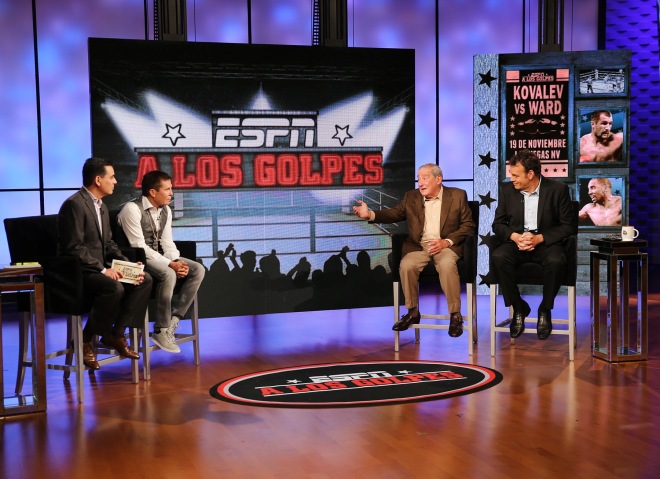 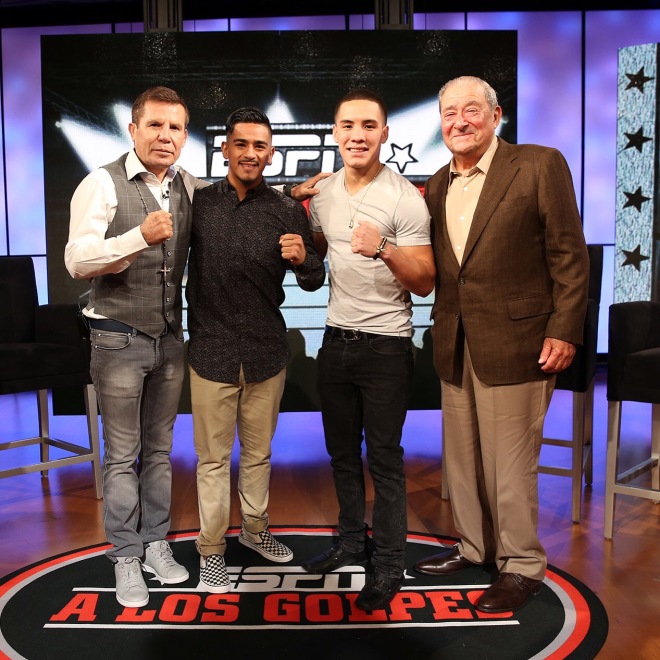 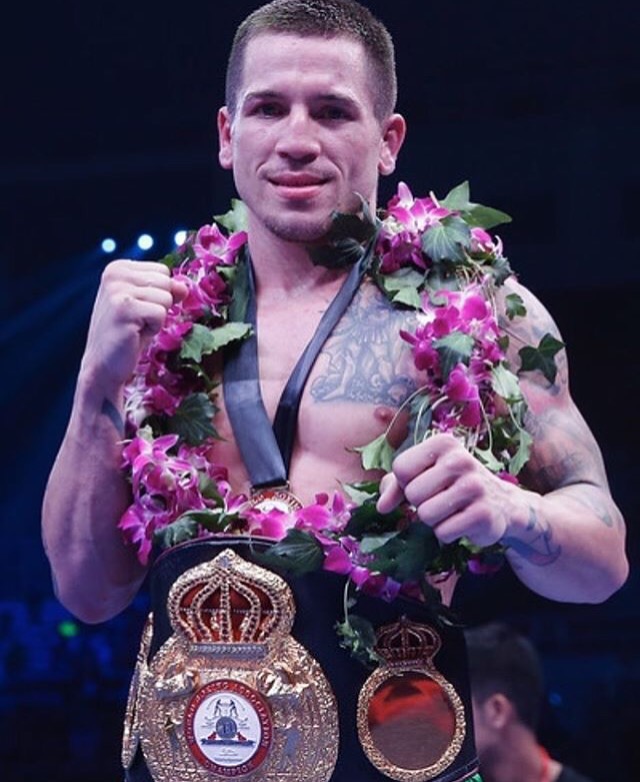 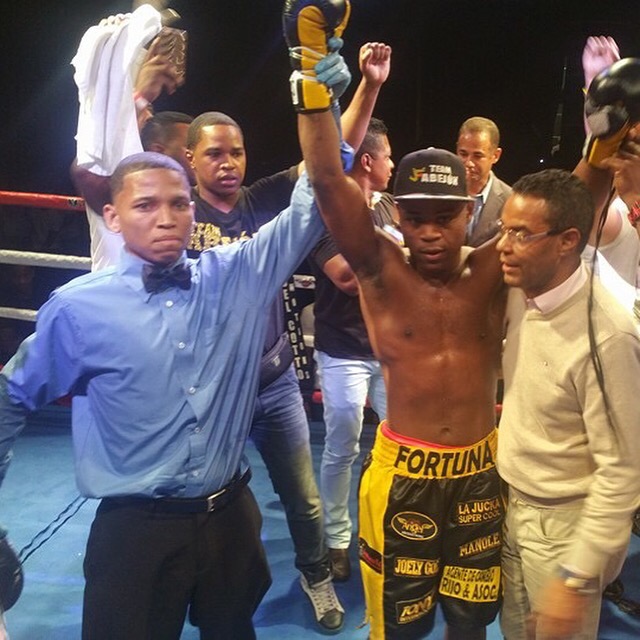 On Saturday night in front of a standing-room-only crowd at the Sambil Commercial Center in Santo Domingo, Dominican Republic, former world super featherweight champion Javier “El Abejon” Fortuna returned to action with an impressive two-round blowout of fellow Dominican Marlyn Cabrera.
In his first fight since a surprise defeat last June to Jason Sosa that cost him his WBA World Super Featherweight Championship, Fortuna (30-1-1, 22 KOs) dropped Cabrera twice in the second round, eliciting the stoppage. It was Cabrera’s first loss as a professional.

Fortuna’s victory was one of three Sampson Boxing fighters to win Saturday night.

Fortuna looked sharp in his comeback bout, putting the explosive power and speed that makes him one of the most exciting fighters in all of boxing. With the victory over Cabrera in the books, the southpaw former champion will now be looking to regain his championship status.

Fortuna’s promoter, Sampson Lewkowicz, says his fighter has two options to consider for his next fight. “Next we will either look for an elimination bout for the IBF mandatory contender to fight Jose Pedraza or we will look to face the winner of Jason Sosa vs. Stephen Smith in Monaco on November 12,” said Lewkowicz. “Javier wants to be champion again and he’ll fight anyone to get there.” 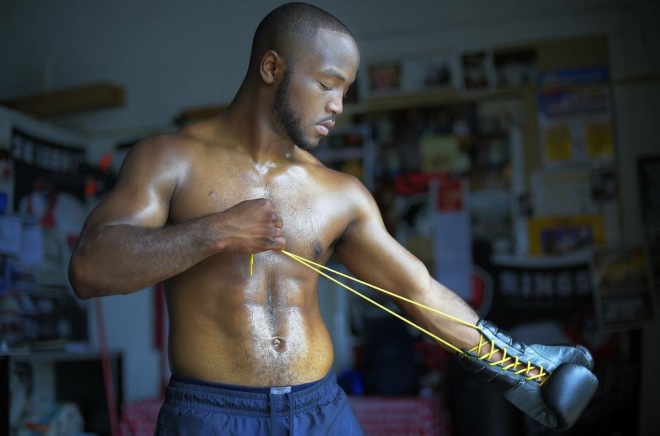 Philadelphia, PA–Junior welterweight Mike Reed, one of the best prospectsin the world at 140 pounds, has been added to the Friday evening, Oct. 14 boxing card at the 2300 Arena.

Reed, of Waldorf, MD, goes against Jose Aaron Herrera, of Mexico, in one of three eight-round attractions on the eight-fight card.

Reed, 23, a southpaw, is 19-0, 11 K0s, since turning pro less than four years ago. This will be his second appearance at the 2300 Arena. He earned a six-round decision over Samuel Amoako, of Ghana, on March 18 in the same ring.

As an amateur, Reed won the 2011 National Golden Gloves championship at 141 pounds, one year after finishing second in the US National Amateur Championships.

“I’ve been watching videos of Aaron Herrera and he’s a tough, durable fighter with excellent ring generalship,” Reed said. “He’s taller than I am but so are most of the guys I fight. “It’s going to be a real fight because I know what he brings. I want to win this fight and work my way toward a match with the Olympian from Fresno (CA)–Jose Ramirez(18-0, 13 K0s). I would like to get him into the ring, but first comes Herrera and I have to deal with him in Philadelphia.”

Herrera, 27, turned pro in 2008 and is 21-5-1, 12 K0s. In his biggest fight to date, he lost a12-round decision to local favoriteJason Pagara for the World Boxing Organization (WBO) junior welterweight title in 2013 in Cebu City, The Philippines.

Local favorites make up the undercard, highlighted by the fourth meeting between lightweights Victor Vasquez; of Philadelphia, and Osnel Charles, of Atlantic City, NJ.Charles leads the series, 2-1, but Vasquez won the last time by knockout.

A pair of six-round lightweight contests featuresAnthony Burgin against Gerald Smith in an all-Philly showdown plus Steven Ortiz, of Philadelphia, against Daniel Tran, of Oklahoma City, OK.

Localwelterweight Hasan Young, who has not boxed in nearly two years, returns in a six-round fight. 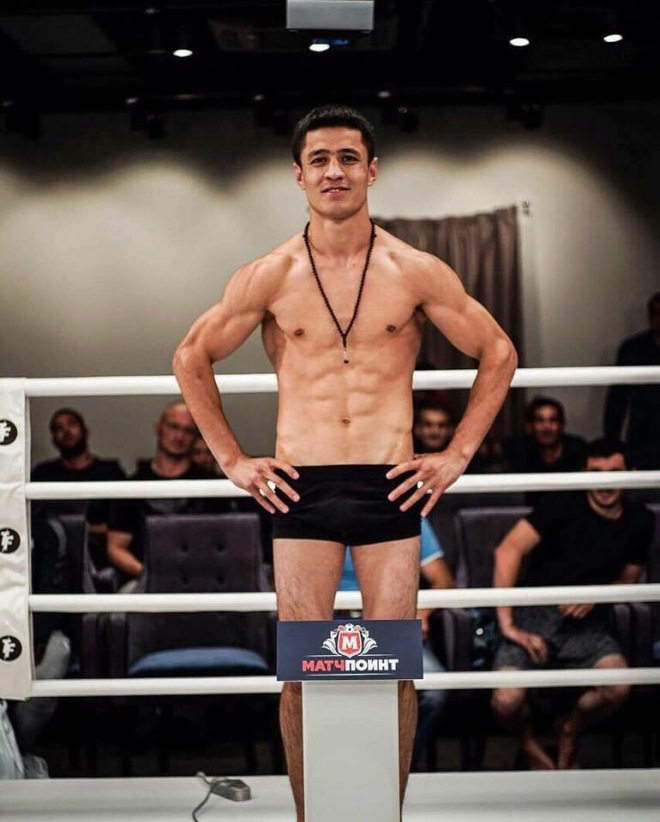 Known as an extreme power puncher in Russian boxing circles, 25-year-old Ergashev (6-0, 6 KOs) is considered one of the best current prospects coming out of Uzbekistan.

Egashev now lives in Moscow and trains in Chelyabinsk, Russia, with Sergey Novikov, trainer of light heavyweight champion Sergey Kovalev in the amateurs. He is managed by well-known Russian based manager Oleg Bogdanov.

Southpaw Ergashev started boxing in 2003 and won the Uzbekistan Nationals four times, starting in 2005. He won 202 of his 216 amateur bouts, holds a victory over Uzbek Olympic Silver Medalist Shahram Gayasov and went undefeated the last three years of his amateur career, winning every fight by knockout against stiff competition.

Having never fought outside Russia as a professional, Ergashev says he’s eager to work with Salita, who can help him bring his talents to the Western world. “I can’t wait to fight for a world audience and show them what my punching power can do to my opponent,” said Ergashev.

Not one to waste time, Ergashev KO’d his last opponent in 16 seconds

“Shoh definitely has potential to be a champion,” said trainer Novikov. “I like his positive, serious attitude towards training and his mindset of destroying his opponents.”

“Shoh is the best prospect I have seen in a long time. He has the potential and power like fellow Kovalev and Golovkin,” said Bogdanov. “I am excited about the opportunity for him to sign with Salita Promotions and come to the US soon to take over the junior welterweight and welterweight divisions.”
“I am very happy to add Shoh to our talent roster,” said Dmitriy Salita. “He has the skills and power to be an exciting and dominant force in the future of boxing.”

Salita says he plans to bring Ergashev to Detroit soon, for an appearance on one of his wildly popular “Detroit Brawl” shows.

A great and competitive fight of champions, with both boxers trading punches throughout. Linares had a noticeable edge in power, but especially hand speed.
When the dust settled, the Judges saw Linares winning by unanimous decision with the next scorecards: 115-114, 117-111 and 115-113.
With this important victory on his opponent`s home turf, Linares conquered the prestigious WBC Diamond belt and improved his record to 41-3 and 27 KO´s; while Anthony Crolla left the ring with a record of 31-5-3 including 13 KOs. 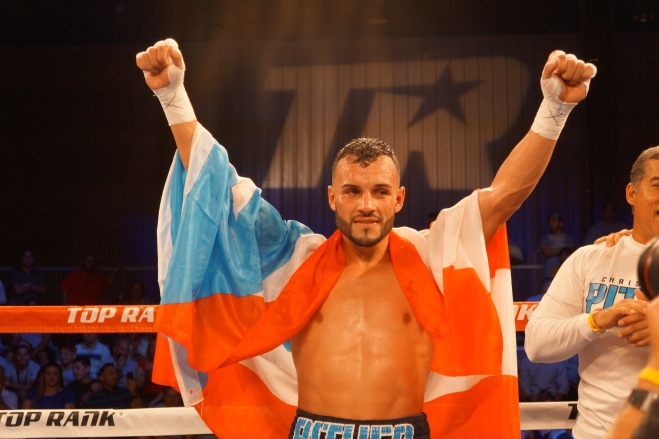 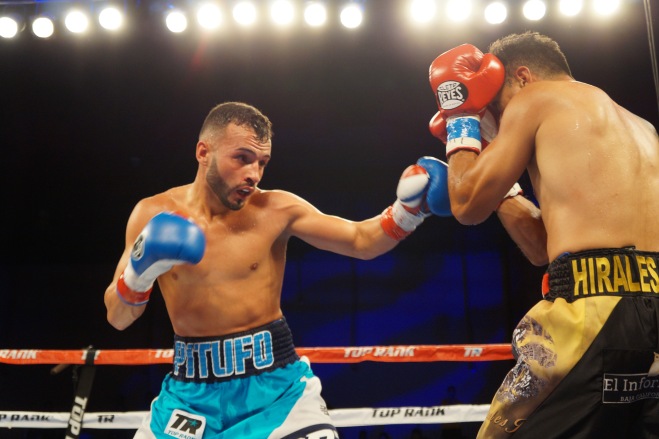 Unbeaten featherweight Christopher “Pitufo” Diaz (18-0, 11 KOs) scored a hard-fought eight round unanimous decision over veteran Raul Hirales (22-6-1, 11 KOs) on Friday night at the Silver Spurs Arena of the Osceola Heritage Park in Kissimmee, Florida. It looked like it might be a short night when Diaz dropped Hirales in round one, But Hirales forced Diaz to go the full eight. Scores were 80-71, 77-73, 79-72. 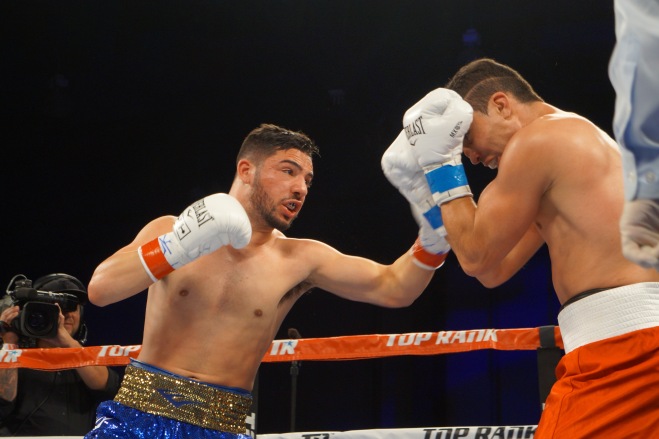 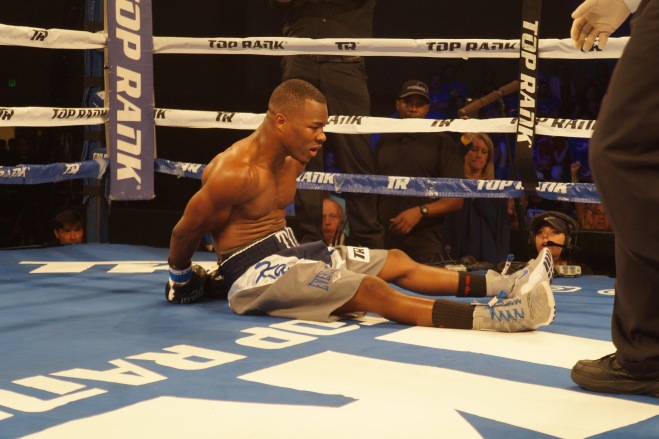 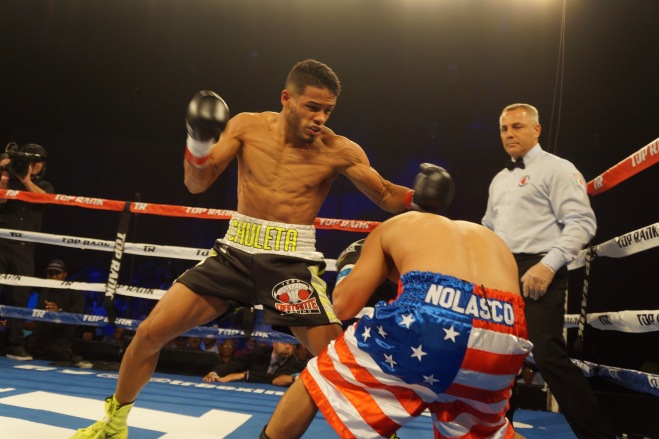 Featherweight Jonathan Irizarry (3-0, 3 KO’s) displayed his power as he takes out Nolasco Tomas (0-3) at the official time of 1:32 of round one. 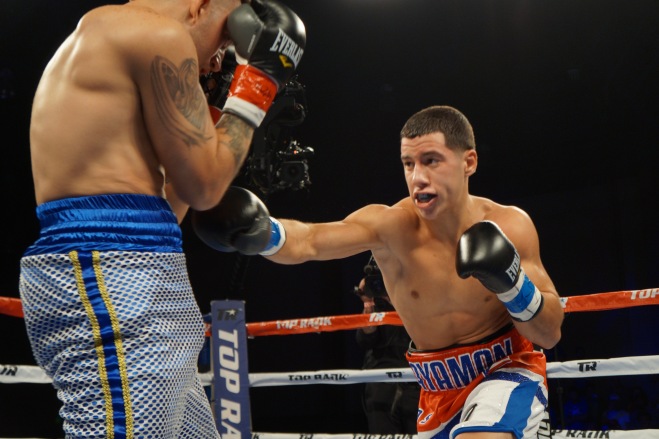 Puerto Rico’s Featherweight Jean Carlos Rivera (8-0, 5 KO’s) went right after Raul Chirino (7-3, 3 KO’s) out working him with hard hooks to the body and head tagged him with a hard uppercut towards the end of round one. Chirino corner did not want to continue ending this bout by TKO round two. 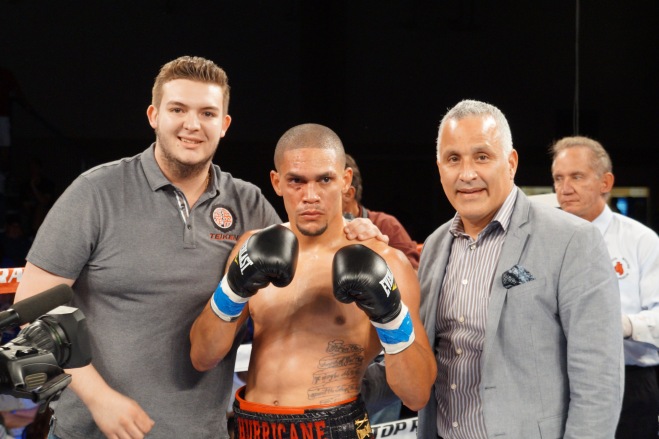 All Star Boxing Welterweight prospect Sammy Valentin (8-0, 6 KOs) scored a third round TKO over Gledwin Ortiz (4-2, 3 KOs). After Valentin dropped Ortiz in round three, Ortiz was deemed unable to continue. Time was 2:29. 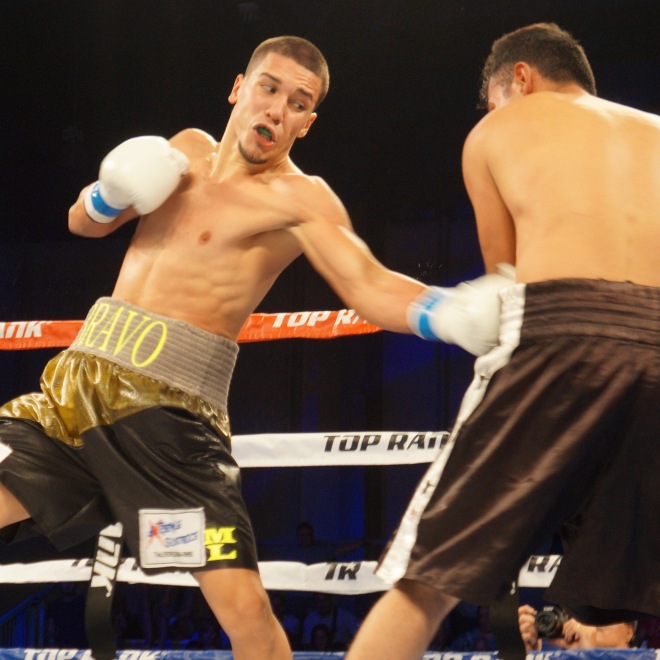 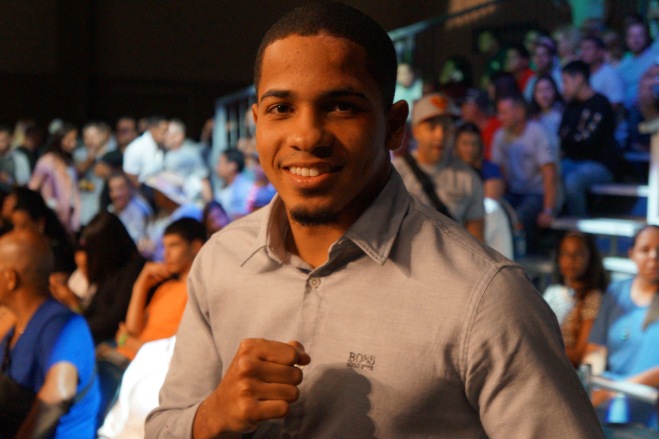 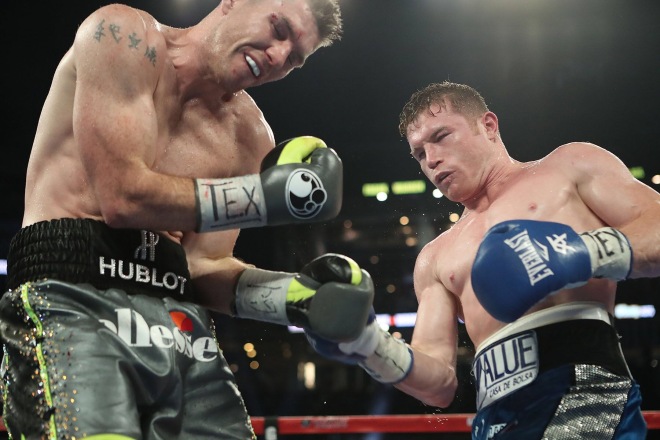 The show started off with a bang as pyrotechnic displays were incorporated into the fighters’ ring walks in celebration of the festive Mexican holiday. At the start of the fight, both Canelo Alvarez (48-1-1, 34 KOs) of Guadalajara, Jalisco, Mexico and Liam “Beefy” Smith (23-1-1, 13 KOs) of Liverpool, England came out aggressively at each other in an exciting battle of power and wits. As the fight progressed, both fighters went back and forth exchanging combinations of face and body shots. In the beginning of the seventh round, Canelo dropped Smith with an overhand right to the head first time in the Brit’s career. In the eighth round, Liam was knocked down again by a body shot and finally, at 2:28 in the ninth round, Canelo secured himself another world title as he landed straight power hit to Smith’s liver, immobilizing the fighter. 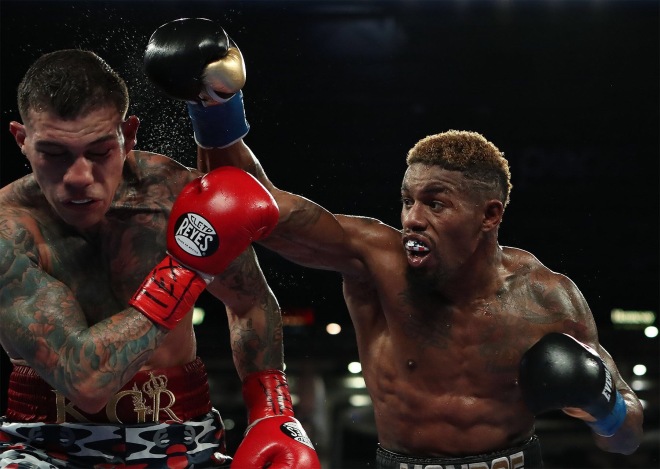 As the co-main event Philly’s “King” Gabriel Rosado (23-10, 13 KOs) battled Willie “El Mongoose” Monroe, Jr. (21-2, 6 KOs), of Rochester, NY in a 12-round match for the vacant WBO Intercontinental Middleweight. Starting out, the fighters tested each other as they kept their distance by using jabs and counterpunches. As the rounds progressed, the fighter’s aggression grew, with Rosado pushing Monroe after the bell for the ninth round. In the eleventh round, Rosado landed a body shot to Monroe while also suffering an accidental headbutt. In the end, the judges determined “El Mongoose” the champion of this fight by unanimous decision with scores of 112-116, 110-118, 111-117.
Photo credits: @hoganphotos @hboboxing @goldenboyboxing @frank_warren_official @RealOscarDeLaHoya 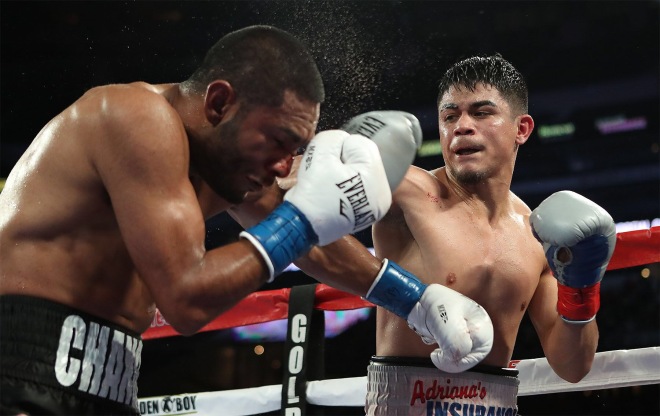 @josephdiazjr Olympian Joseph “Jojo” Diaz, Jr. (22-0, 13 KOs)of South El Monte, Calif. put his NABF Featherweight Title on the line as he faced Blythe, Calif.’s Andrew “El Chango” Cancio (17-4-2, 13 KOs)in an entertaining scheduled 10-round scrap. In the first rounds, both fighters tested one another, as each exchanged blocks and blows in hopes of winning the fight. By round five, Diaz, Jr. continued to do work defending himself and landing devastating punches to Cancio. By 2:27 of the ninth round, Cancio’s corner stopped the fight, giving Diaz, Jr. a technical knockout victory to retain his title. “This is a great victory, it will open up so many doors for me moving forward,” said Joseph Diaz, Jr. “I felt very comfortable today, I was the better puncher, I was faster and was able to cut the ring more efficiently. I knew that Cancio was going to be a strong guy, I knew he was going to be tough and try to push me around, so I had to be the better fighter tonight. I was able to display my defense and my power.”