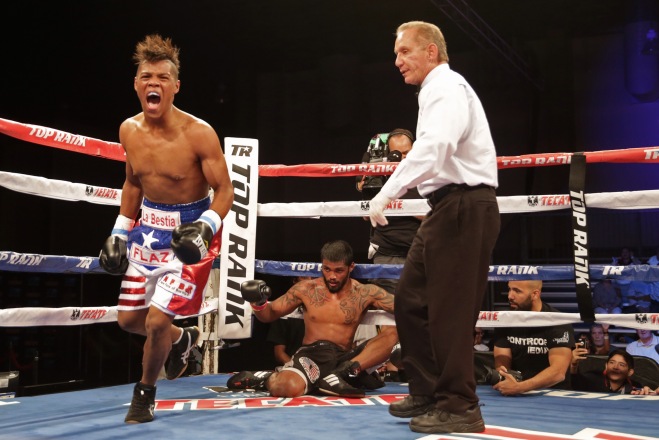 Flaz didn’t waist no time opening up with hard right hands to the head of Litchmedial who was gain to throw right back Flaz got him in deep waters dropping Litchmedial twice right before the end of round one.
Flaz continued applying pressure on Litchmedial with hard over hand rights dropping him again referee Frank Santore notices quickly that Litchmedial was hurt waves off the bout at 1:10 seconds of round two for TKO victory for Flaz.

Torres opened up established jab followed by quick hooks to Vert’s body, Very trying to get inside but was dropped by left hook to the body, Torres quickly attacked throwing another hard left hook to Vert body referee Jemes Warren seen enough waving off the bout at 2:41 seconds of round one.
#BoothGonzalez Saturday, October 31st at the Osceola Heritage Park – Kissimmee, Florida 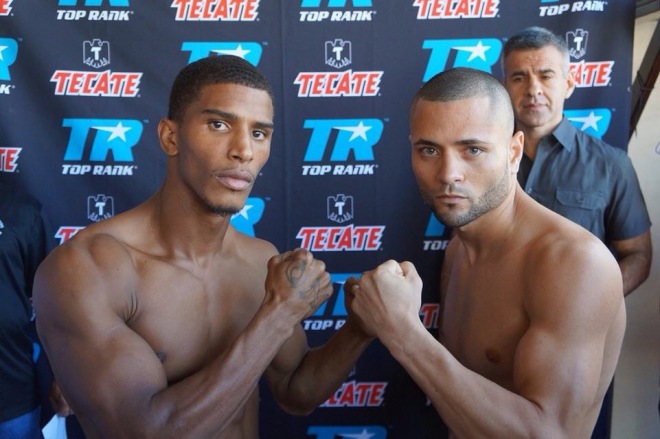 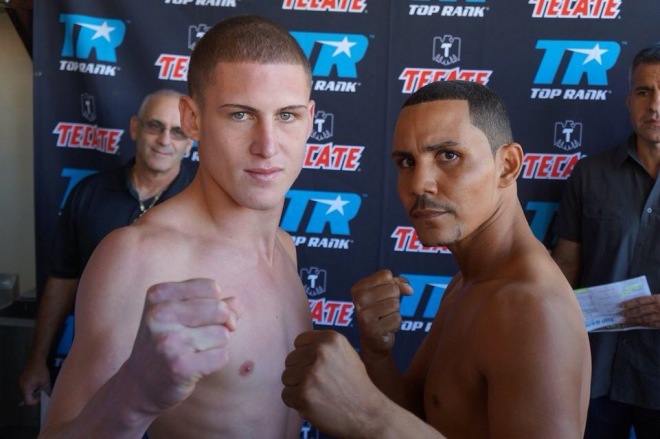 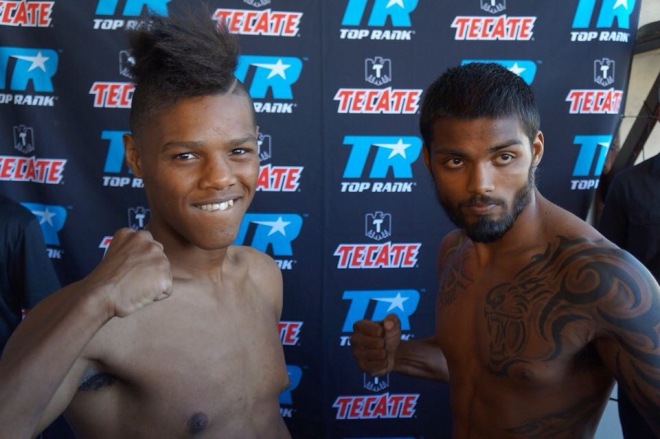 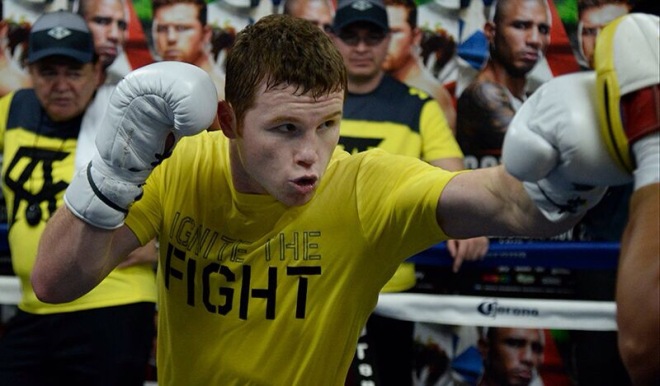 Oscar De La Hoya, chairman and CEO of Golden Boy Promotions, surprised Canelo at the workout with a special presentation to commemorate the 10th anniversary of the Mexican superstar fighter’s first professional fight, a fourth-round technical knockout that took place Oct. 29, 2005 in his hometown of Jalisco, Mexico.

Below is what Canelo, Oscar De La Hoya and his team had to say: 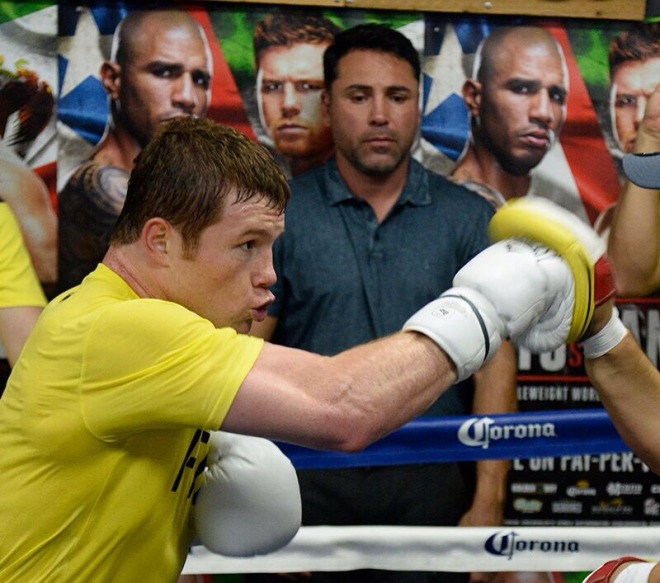 “We are very prepared for this fight. It has been a great training camp we have been working on technique to make sure we are not surprised on fight night.

“I have had great sparring partners for this fight, focusing on Cotto’s style of fighting. We also know he is a southpaw and that has been something we always work on.

“I am not afraid of any fighter, but right now I am focused on Cotto. Once this fight is over we can move on to the next big fight.

“Every fight at this level has been difficult and the best that we can do is, be prepared. You can’t predict the outcome of a fight, but we make sure to leave not doubts in the ring.

“I want to fight the big fights and am not afraid to take risks. I believe my fighting style and opponents over the years have shown that. I am here to prove I am the best and the best way to do that is fighting the best.”

“Canelo Álvarez is ready for November 21. I’ve visited his training camp many times and he is looking great, very strong, very powerful.

“Canelo has been fighting for 10 years now, but he’s still only 25-years-old. I think the best is yet to come with him. He has grown as a fighter every year, learning from victories and his losses. Legacy is important to him, and when all is said and done, I know he will be remembered as one of the best in the sport.

“November 21 will be a war in the ring. There will be fireworks, and Cotto vs. Canelo will be remembered as another great fight in the historic Mexico vs. Puerto Rico rivalry.”

“I have great respect for Freddie personally, but it is a different kind of respect when you’re in the ring. I am sure Cotto has preparing for this fight, but Canelo has the power, speed and youth to be the best fighter on Nov. 21.

“I have seen Canelo grow as a fighter his whole career and I believe he is ready to become the future of boxing and beating Cotto will prove it.

“Every fighter has learned from their experiences and Canelo and continues to progress as a fighter. He is only getting better and is a different, stronger, fighter compared to few years ago.

“Every day we are pushing Canelo and he does everything without question. He is a dedicated and hungry fighter who takes his career seriously. On Nov. 21 we will raise our arm in victory for Mexico.”

“Canelo is a serious fighter who doesn’t take any opponent lightly. He is always ready and willing to fight the best fighters in the sport.

“This is one of the biggest fights in the Puerto Rico vs. Mexico rivalry. And we will prove on Nov. 21 that Mexico is the best.”

Cotto vs. Canelo, a 12-round fight for Cotto’s WBC and Ring Magazine Middleweight World Championships, takes place Saturday, Nov. 21 at the Mandalay Bay Events Center in Las Vegas. The fight is presented by Roc Nation Sports, Golden Boy Promotions, Miguel Cotto Promotions and Canelo Promotions and sponsored by Corona Extra; Mexico, Live it to Believe it!; O’Reilly Auto Parts; Tequila Cazadores and Corporate Travel Made Simple (ctms). Also featured on the pay-per-view telecast will be Takashi Muira vs. Francisco Vargas in a 12-round fight for the WBC Super Featherweight World Championship presented in association with Teiken Promotions and Jayson Velez vs. Ronny Rios is a 10-round featherweight. The event will be produced and distributed live by HBO Pay-Per-View beginning at 9:00 p.m. ET/6:00 p.m. PT.

Randy Caballero vs. Lee Haskins is a 12-round fight for the IBF Bantamweight World Championship presented in association with Bristol Boxing Ltd. and will be featured as part of the preliminary undercards available on digital platforms starting at 7:00 p.m. ET/4:00 p.m. PT.

LOS ANGELES – Making the first defense of his IBF Bantamweight World Title, Randy “El Matador” Caballero (22-0, 13 KOs) will headline the preliminary undercard preceding the HBO Pay-Per-View® telecast of the Miguel Cotto vs. Canelo Alvarez event on Saturday, November 21 as he faces off against England’s Lee “Playboy” Haskins (32-3, 14 KOs) at The Mandalay Bay Events Center in Las Vegas.The 12-round world championship bout will be available to view digitally on HBO Boxing’s YouTube Page, TIDAL.com and GoldenBoyPromotions.com, along with other websites and outlets to be announced shortly. Additional undercard fights will be announced separately.
“I am excited to be fighting in one of the biggest cards of the year,” said Caballero. “I have been out of the ring for about a year and it has been hard watching all the great shows, but I am ready to come out strong and defend my title. I know Lee is a tough guy, there is a reason why he is my mandatory, but his style will make me shine on fight night. This training camp has been wonderful, my body feels different, and we have been training very hard to make sure I remain the champion. I feel there is more to accomplish, and this is my big opportunity to shine and stand out on Nov. 21.”
“Randy has the charisma, athleticism, fan-friendly fighting style and now a world title to make him one of the future top stars in the sport,” said Oscar De La Hoya, Chairman and CEO of Golden Boy Promotions. “Fans watching Randy’s fight live at The Mandalay Bay Events Center in Las Vegas and at home on the preliminary undercard on Nov. 21 are in for a real treat when he makes his first title defense against Lee Haskins, who, like Randy, is one of the top fighters in the bantamweight division right now. This fight will be a clash between two warriors and a great precursor to the guaranteed action in the main event with Miguel Cotto and Canelo Alvarez that night.”
“All my life I have dreamed about boxing in Las Vegas and now my dreams have come true,” said Haskins. “I have great respect for Randy Caballero, and I will be in the best shape of my life with all intentions of bringing the IBF World Bantamweight belt home. You best believe I am as fit as a butcher`s dog. I am counting the days for when I arrive in U.S.A. Let’s get it on!”

The fighting pride of the Coachella Valley in California, Randy “El Matador” Caballero is one of the sport’s most intriguing rising stars and as the IBF World Bantamweight Champion prepares for his Las Vegas debut, he is on the verge of taking his career to the next level in a big way. “El Matador” Caballero has gone from local hero to international standout over the course of a professional career that began in 2010, as his meteoric rise has seen him defeat the likes of Alexis “Beaver” Santiago, Jose Luis “Tapitas” Araiza, Manuel “Suavecito” Roman and Luis “Titi” Maldonado. In 2014, the 25-year-old took his show on the road as he traveled to Kobe, Japan to defeat Kohei Oba via eighth-round technical knockout. The victory earned the 24-year-old Caballero a shot at a world championship, and on October 25, 2014 he packed his bags once again, as he traveled to the Salle des ‘Etoiles in Monte Carlo to defeat England’s Stuart Hall for the vacant IBF World Bantamweight Championship.
British southpaw Lee “Playboy” Haskins has had a big 2015 campaign thus far. The Bristol native regained the EBU Bantamweight Title in February with a decision win over Omar Lamiri and then took the interim IBF Bantamweight crown in June by stopping Ryosuke Iwasa in six rounds. This November, the 31-year-old will attempt to unify the title with the highly touted Caballero and is determined to go back to England with the belt.

That’s Right I Said It!!! Folks you want to see #mayweatherpacquiao2? Ok let’s blog it lets call it they both got skillz right well let’s get them on the court in a one on one game. Exciting? Heck yeah I think this will be something that all can enjoy and especially both of there charities. @floydmayweather @mannypacquiao @mayweatherpromotions @trboxing @leonardellerbe @frankstea @tmz_tv