Rojas could avenge his only loss and dominated Beranza, who came to fight from bell to bell.

The Mexican showed resistance for ten rounds, but the Puerto Rican boxing clever exceeded the gallantry of Aztec. 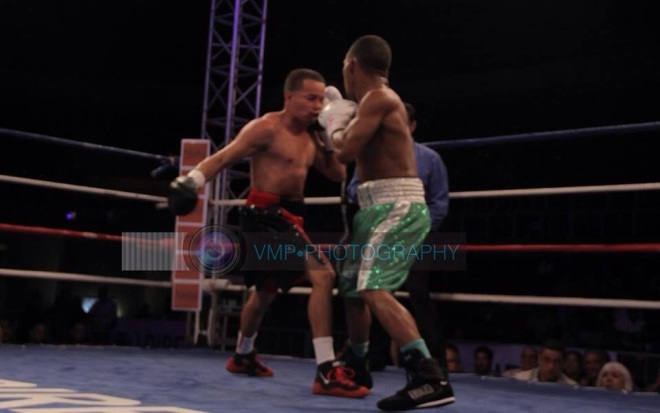 Gonzalez remained calm before a cunning and elusive ‘Samurai’, dominating each combat assault.

In the sixth and final chapter, ‘Bomba’ connected with a powerful right hook to the face Del Valle to send him to the canvas.

“I could use a smart boxing and stayed calm throughout.

We made we work in the gym and the hands go well.

Thank God Were back, “said Gonzalez. 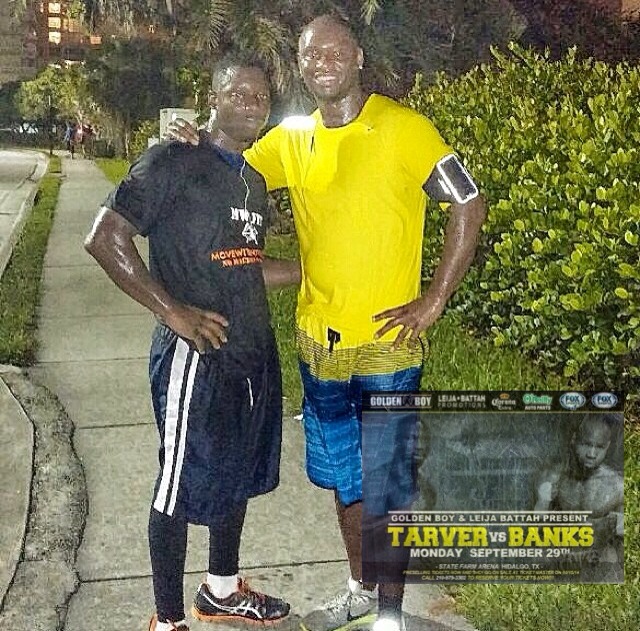 @antoniotarver Camp update: 5 x World Champion Antonio “Magic Man” Tarver sets camp in Miami, Florida. kinda like just next door to Jonathan Banks who is currently training in Ft. Lauderdale. Tarver making intelligent steps in his camp by bringing on long time trainer of the “Warrior” Glen Johnson the acquiring of Trainer Orlando Cuellar @CommanderZero to work with Tarver as he gets set for Sept 29th #GoldenBoyLive clash against Jonathan Banks.

Excitement is in the air at Tarver Camp as Antonio Tarver, Jr. @tarverjr gets set to make his long time waiting professional debut at the @statefarmarena
Tarver,Jr. is clearly a boxer but can slug it out with the best of them, It builds up to be awesome to have a father and son featured on a professional fight card. Presented by @goldenboyboxing and @foxsports1 @coronaboxing
@realoscardelahoya @monicasears @marylynaceves @micheladatime @makeawar @betovision @jessrosales1 @class56ramiro @swansonpr @swanson_comm 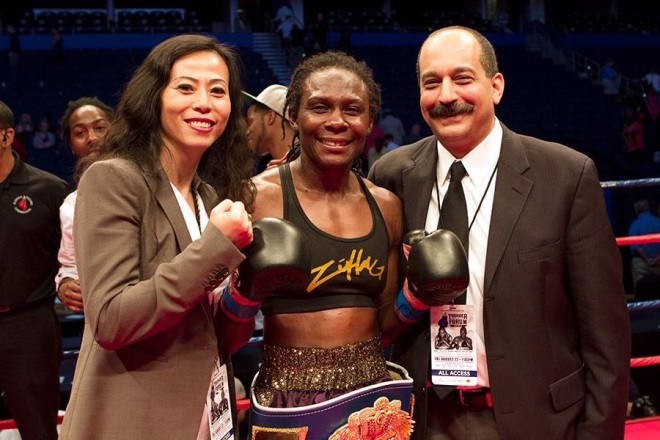 This past Friday at the Tampa Bay Times Forum in Tampa, Florida, two new WBF titleholders were crowned in the two main bouts on Thunder At The Forum Round 2, presented by Panda 5 Star Promotions.

In the main event, Chevelle “Fist Of Steel” Hallback (30-8-2, 13 KOs) won the the vacant WBF Womens Welterweight title in an action-packed and exciting bout against former foe Victoria Cisneros (11-16-2, 4 KOs). Hallback beat Cisneros by split decision in 2010, But it was winners hometown as Hallback had something to prove starting of with devastating exchanges by both fighters, Hallback using nice jabs and crosses repeatedly as Cisneros gunned down Hallback’s body pressing her on the ropes all night long Hallback battled hard in a brutal back and forth fight, The end came in round eight when Hallback connected with several overhand rights that hurt Cisneros buckling her 3 times in the round Cisneros who was no longer able to defend herself and was consequently stopped on her feet before another power-punch could do more serious damage. Official time of stoppage was 1:49.

Round one action Corley stood toe to toe against Bell who established a nice jab in round one but Corley fighting slick catching bell flush with nice right hands in a very close opening round. Round 2 Corley went in for the kill trading with bell with multiple right hands to the face dropping Bell at .40 of round two to capture the WBF North American Jr. Welterweight Title.

In the opening bout of the night Welterweight Tayfun Tiryaki in his professional debut scores a right hand TKO of Yasmany Calzadilla (1-1-0, 1 KO) at 2:50 of round one of there 4 round match, It didn’t take much for Tiryaki to set his punches and bait Calzadilla to fight small and exchange catching him flush while slugging Tiryaki dropping Calzadilla 3 times as referee Frank Santore seen enough and called a hault to the bout.

DAWSON-ROUSSEAU POUNDED TO A DRAW.

Jr Welterweights Lee “Holliwood”Dawson (2-2-3, 0 KO’s) trading shots against tough Berthin Rousseau who came to fight, First two rounds Rousseau found his spots landing nice combinations to the slow starting Dawson who found a surge in round 3 landing bombs slowing down Rousseu a bit with a wide hook followed by straight right hands from Dawson who did enough to earn the round. In the final round both fighters letting there hands go fighting to a 38-38 Draw in all three judges score cards.

Middleweight Serge Cadeus from Miami,FL. wins by unanimous decision in a non attractive four round match. fight picked up In round three Cadeus who fought well catches Duvertgel coming in with a short right hook sending him down to a knee for the count. Cadeus found a way to box in the 3rd catching Duvertgel clean, it was Cadeus seizing the opportunity outworking Duvertgel for the victory.

Coming off her thrilling win at Thunder at the Forum, presented by Corona Extra, in June, Chevelle “Fists of Steel” Hallback (Plant City, FL) will take on Victoria “La Reina de Guerra” Cisneros (Albuquerque, NM) in a 10-round bout for the WBF Female Welterweight World Title. Both weighed in at 147 lbs. This match will be the finale of Thunder at the Forum: Round 2, presented by Corona Extra. The pair have fought once before, with Hallback scoring a victory by split decision in 2010.

Resendiz and Pauldo will both be making their second appearance at the Times Forum after both winning their respective matches at the first Thunder at the Forum. Resendiz scored a 51-second knockout of Kherani Kessoon while Pauldo made his boxing debut and defeated Coleman Johnson by decision. 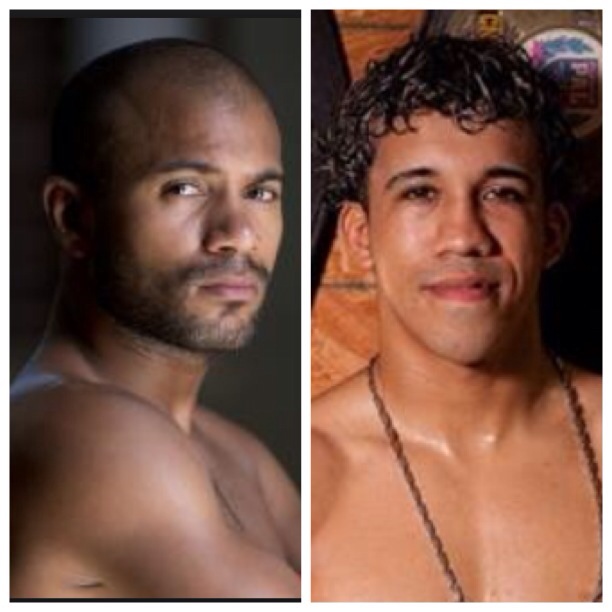 @AllStarBoxing a Puerto Rico vs Mexico Battle you don’t want to miss as Jonathan Vidal @PITBULLvidal vs. Daniel Lozano @alacranlozano will clash for the Latin WBO @WorldBoxingOrg title on Friday October 4, 2014 at the A La Carte Pavilion Events Center in Tampa, Florida live on @BoxeoTelemundo @deportestelemundo @anajurka @sidestepboxing @pier6promotions @ivan813tampa 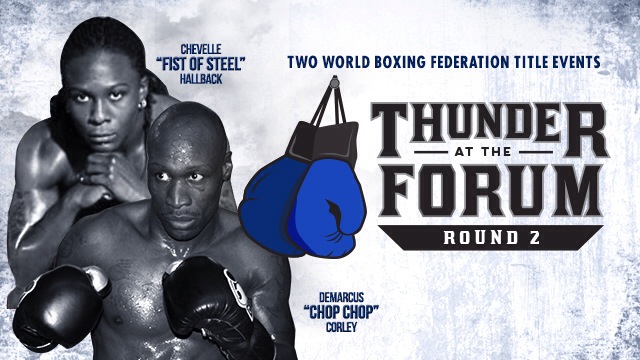 After the success of the initial Thunder at the Forum event in June, the Tampa Bay Times Forum and Panda 5 Star Productions will once again join forces with THUNDER AT THE FORUM: ROUND 2 presented by Corona Extra on Friday, August 22, at 7:45 p.m. In a unique duel main event scenario, the vacant World Boxing Federation Female Welterweight World and the men’s World Boxing Federation North American Jr. Welterweight titles will be up for grabs.
Coming off a June win during Thunder at the Forum, Tampa’s Chevelle “Fist of Steel” Hallback will take on Victoria “La Reina de Guerra” Cisneros as they fight for the WBF Female Welterweight World title. This will be the second time these two women will meet in the ring. Their first encounter was in 2010 where Hallback won by split decision.
In a 10-round bout for the men’s WBF North American Jr. Welterweight title, DeMarcus “Chop Chop” Corley will meet Cleotis “Mookie” Pendarvis for the first time in the ring. Both fighters have worked diligently to establish themselves as top contenders in the professional boxing circuit. Corley has taken on Floyd Mayweather, Jr., Miguel Cotto, Devon Alexander and Zab Judah while Pendarvis has worked with Sugar Shane Mosley, Antonio Margarito and Oscar De La Hoya. Both fighters have held titles from several sanctioning bodies

In the much-anticipated WBO Light Heavyweight World Championship bout, Sergey “Krusher” Kovalev (25-0-1, 23 KO’s*) takes down undefeated Australian challenger Blake “Il Capo” Caparello (19-1-1, 6 KO’s) in the second round in the third defense of his WBO Light Heavyweight World Title. Kovalev was under a microscope these last few days with the possibility of a unification bout with Bernard “Alien” Hopkins looming. Krusher did not let the pressure get to him, he focused only on the opponent in the ring with him tonight.

Kovalev and Caparello were feeling each other out in the first round. Caparello knocked Sergey off balance in the first and his glove touched the canvas, but Krusher got back up quickly. Blake went down in the second from a crushing body blow but beat the count. He taunted Kovalev to come back at him which Krusher did in relentless fashion. After two more knockdowns, referee Sparkle Lee called it off at 1:47 of round two.

In the first fight of the evening a Philly vs. Jersey middleweight match-up, Hakim “Braveheart” Bryant (2-0, 1 KO) of Middletown, NJ remained undefeated by knocking out Anthony Watson (0-2) of Philadelphia, PA at 0:38 in the fourth and final round of the contest.