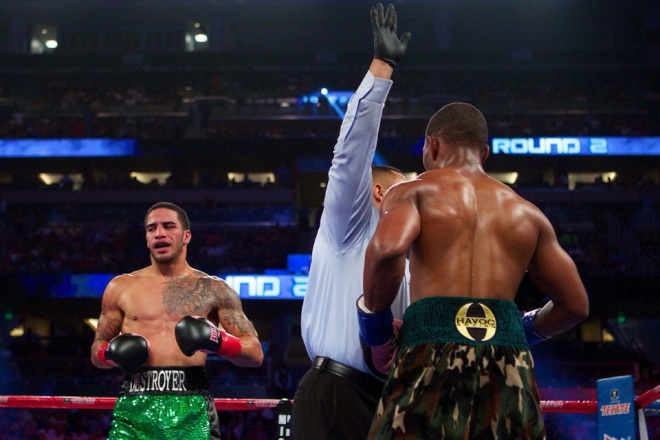 Puerto Rican junior middleweight slugger Jorge “Destroyer” Melendez (27-3-1, 26 KOs) is on the verge of getting a fight he has been calling for, for a very long time: an all-action “can’t miss” showdown with the always-dangerous Mexican, Alfredo ‘El Perro’ Angulo (22-3-18 KOs).

With only some purse negotiations left to settle, the pair are set to meet on Saturday, December 14, at the MGM Grand in Las Vegas and live on SHOWTIME Pay-Per-View, as one of the featured bouts of a blockbuster night of boxing that also features Adrian Broner vs. Marcos Maidana, Jesus Soto Karass vs. Keith Thurman and Victor Ortiz vs. Carlos Molina.

“Let’s get this finished, so I can begin getting ready to give the great people of Puerto Rico my finest victory yet,” said Melendez. “By beating Angulo into retirement, I will put my island back on the boxing map worldwide. It will be a war, but I’m a Puerto Rican warrior who doesn’t run. I have the best power in the entire division and Angulo will be ‘Destroyed’.

Only a select few times per year does a notable fight get made for a wide audience with this much “Fight of the Year” potential. Melendez manager, Edwin Diaz, says he hopes an agreement can be reached with Golden Boy Promotions on purse, to keep this sensational fight a reality. “We are not asking for an excessive amount,” he explained. “In fact, our request is still below the real value of the fight. ‘Destroyer’ vs. ‘El Perro’ will steal the spotlight that night. With so many disappointing matchups this year, this is the kind of guaranteed-action fight boxing needs. Boxing fans and critics alike want this fight, so let’s make it happen.”

Melendez has been calling out Angulo for years, trying to make this exciting fight his calling card to the big time. The 24-year-old was last seen scoring an impressive TKO 2 victory over capable Philadelphia veteran Jamaal Davis on Saturday, October 5, on the TopRank.tv broadcast “Cotto vs. Rodriguez” undercard.

“Today I woke up with more desire and enthusiasm than ever,” continued Melendez. “I’m going to train harder than I ever have for this fight, while my coach, Wilfredo Vázquez, designs the strategy to defeat Angulo. Let’s get this fight negotiation finished so I can get ready. And when that night comes, the dog, ‘El Perro’ will go out screeching and with the tail between his legs.”

Diaz says it is expected that in the coming days, the team of both fighters and Golden Boy Promotions will reach a satisfactory agreement. 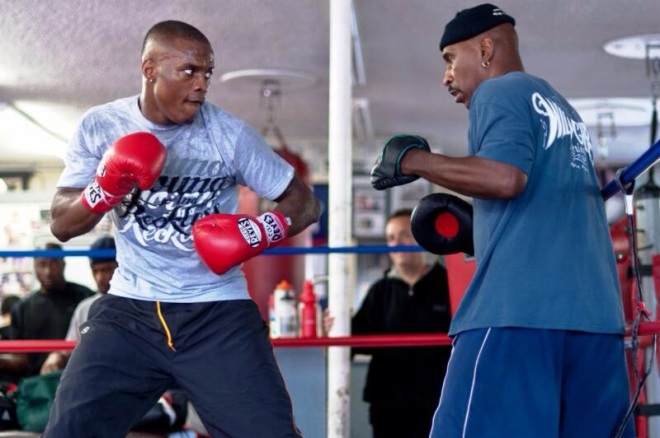 WBO No. 11-rated Rosado going down has less to do with the quality of his chin or durability, rather a credit to Quillin’s awesome power.

Quillin’s 29 opponents have been dropped a total of 31 times, including an amazing 10 knockdowns in his last two fights, both in world championship competition, against Fernando Guerrero (4 knockdowns) and former WBO champion Nassan N’Dam N’Jikam (6 knockdowns). “Kid Chocolate” also dropped future Hall of Famer Ronald “Winky” Wright, in Quillin’s fight prior to him challenging N’Jikam, which ended in a unanimous 10-round decision that sent Wright into retirement.

“I get paid to give 12 rounds of action,” Quillin said. “I am a performer in the ring and I’ve trained hard to be a power puncher. At times I’ll take a punch to give back a few of my own. I have power to knockout my opponent with my right or left, at any point of a fight. Earlier in my career, a lot of my knockdowns and knockouts came in two rounds or less, but I had 10 knockdowns in my two world title fights. No matter how many times they get up, I’m going to keep knocking them down.”

What explains Quillin’s propensity to knockdown his opponents so often?

“Animal status,” Quillin’s head trainer Eric Brown quickly answered. “Peter is a beast! He is very solid, focused and a fundamentally sound fighter, who can knock you out with either hand. He’s very hungry and appreciates what it really means to be world champion.”

Tampa,FL- On Friday night was the Inaugural Pier 6 Promotions debut in professional boxing as the newest promotor in Florida Ivan Echevarria weathered the storm of overwhelming criticism of not succeeding with his October 18th venue that landed Echevarria in the hospital, Echevarria focussed on taking care of his health Apparently overcame and moved forward with what I might say a very well done venue.

In the Main Event in-front of a sold out crowed at the Doubletree Westshore in Tampa, FL. It was Radivoje “Hot Rod” Kalajdzic fighting for respect with a early impressive showing going right after veteran Otis “Triple G” Griffin (24-14, 10 KO’S) right from the bell in round one, Kalajdzic gained control right from the jump shooting bombs right at Griffin who needed a head start in the exchanged but invited the exchange against the quicker Kalajdzic who dazzled Griffin with a hook that drops Griffin two his knees mid of the round, Griffin taking half the count by referee Dennis DeBon got up to continue in the contest Griffin fighting defensively attempted to fight back and did, landing a few jabs on the coming forward Kalajdic who denoted to be fighting with a killer instinct attacked Griffin on the ropes as referee Dennis Debon jumped right in-front of Griffin waving off the fight as Griffin had a few words in the ring with the referee contesting that he was ok.

Kalajdzic who predicted in Thursday’s press conference he was going to knock out Griffin gets the TKO stoppage as Radivoje Kalajdric becomes the Lt. Heavyweight IBU Champion.

In the co-main event Aaron “Jedi”Jaco (16-3, 6 KO’s)from Sarasota, Florida out punched Timothy Hall who drops to (7-15, 4 KO’s) out jabbing him early firing body shots to Hall the less active fighter in the early going. More Importantly, Jaco crushes Hall with a perfect punch in 2nd rd. Hall rally’s back throwing overhand rights banging with Jaco who had more success fighting Hall tall, Jaco turned the turned around landing more punches outworking Hall who showing that he is making the fight hard for himself. Hall landed a solid right hand that just fired up Jaco more turns and rocks Hall with a right hand Jaco leaning in to fight Hall close Jaco went right back to the jab lands a devastating right hand to the head of Hall who is being eaten up with the long-arm quickness of Jaco. It clearly was a matter of time in this contest referee Emil Lombardi jumped in to stop the action at 1:20 of the 5th Round.

Jr Bantamweights Noemi “La Rebelde” Bosques (3-0, dominated a 4 round unanimous decision 43-35 in all 3 judges cards against tough mexican Maria Ruiz from Huston, Texas. Bosques catches Ruiz in the exchange dropping her in Rd 1. the action continued as Bosques jab seemed to have radar to Ruiz face, no matter what Ruiz threw the St. Petersburg rising star Bosques landed with authority and telling effect against the ineffective Ruiz.

Bosques corner trainer Sherman Hunson keeping Bosques in close range with Ruiz who had a hard time in the inside with the quicker Bosques who capitalize in the contest.

Welterweights Jean Colon De Jesus in the corner trying to recover from a left right combination that drops him hard to the canvas giving Tampa’s Paul Simpson (2-0, 1 KO) the TKO victory at 1:31 of Round One.

In the opening bout Lt. Heavyweight Jarrett White (1-0,1KO) in his anticipated pro debut celebrates on top of the corner on the ropes after sticking fear into Nathan Ortiz with TKO at 2:39 of the 1st round. White looked to have the stronger physique started off by sticking a hard double jab to the face of Ortiz who was disposed quickly with the impressive outing of White.

Sunrise, Florida – Rest assure that Hot undefeated Super Welterweight Jermell Charlo (22-0, 11 KO’s) knows exactly what he is doing, One can’t help but to wonder how big is this kid is going to be in the sport of boxing , inspired chants of “Char-lo, Char-lo throughout the BB&T Center in Sunrise, Florida this past Monday nights Golden Boy Promotions and FoxSports 1 “Golden Boy Live Series” Charlo pressured Jose Angel Rodriguez who now drops to (17-3-1, 2 KO’s) as he barely to me won a round, Charlo quickly ripped into Rodriguez early as he out speed Rodriguez with dazzling combinations.
Rodriguez held his own in the bout but not as sharp as Charlo who catches him with jabs and straight rights as Charlo stepped on the gas in the 10th threw a sneak left at Rodriguez who was overwhelmed by the punches referee Sam Burgos jumped in to give Rodriguez a standing eight count, Charlo charged out of his corner to finish off Rodriguez in which referee Burgos have seen enough waved off the fight. 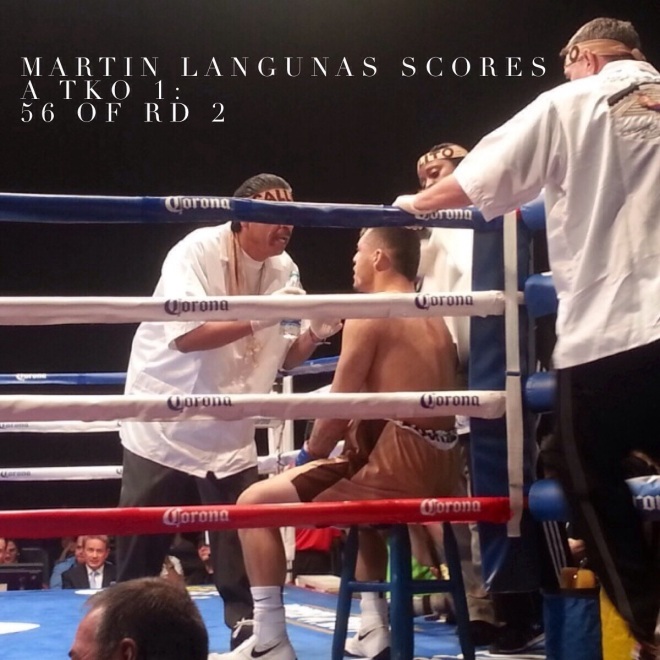 By Damon “Latinbox” Gonzalez
It clearly is time to face the facts the Timothy “Desert Storm” Bradley (31-0, 12 KO’s) is one of the very best welterweights in the world, In a grudge match this past Saturday against Juan Manuel Marquez, He was clearly on a mission using his hand speed and good jab fought his heart out against the legendary Marquez. In my opinion don’t look any further as Adrian “The Problem” Broner (27-0, 22 KO’s) steps into the ring on Saturday December 14th at the MGM Grand Arena in Las Vegas against the hard hitting Marcos Maidana (34-3-0, 31 KO’s) It is clear that Broner a great entertainer with his talk has to back it up and show the boxing world what he is truly made of.
Here is Broner’s opportunity to fight like he belongs, But if he thinks that he will have it easy come again. Broner keys in the fight with Maidana he must go out create imbalance through movement and faints, then try to catch Maidana, In my opinion to do anything else would not be too wise however he must Box and work to his advantages. I’m going to give Broner a Unanimous decision over Maidana only to say the next level is yet to come.
I just paint the thought of a Timothy Bradley vs. Adrian Broner PPV super fight in February or March of 2014. I am personally ruling out the idea of a Mayweather-Bradley match up clearly because there is too much reality of Un- finished business in the Welterweight division.
Broner at this point has a little more to prove in competition, His December 14th matchup is clearly no fluke, and can set up a great rivalry with Bradley, I see an existing very entertaining matchup of styles between them both it to me is more of a offensive fight then a defensive fight.
Bradley-Broner will bring the best in themselves and boxing cannot overlook the potential to be a classic fight, Bradley extends his reign and Broner can get his shot in the division to really say he is number one.

Sunrise,FL-At Johnny Rockets at Sawgrass Mills Mall Golden Boy Live strikes again with another compelling Monday Night Fights on FoxSports1 Featuring a match up that most in the boxing community would say a grudge match of two warriors as Jose Angel Rodriguez (17-2-1, 2KO’s) will look to step into the four corners and prove his medal against a slick quick and smart Underfeated fighter Jermell Charlo (21-0, 10 KO’s who is special in a lot of ways no question he appears to be moving up quickly in the boxing scene as a crafty exiting young talent that will be a force to deal with in the Jr Middleweight division.

In the co main event Emmanuel Lartey (16-0, 8KO’s) came in weight on point at 147 lbs looking very strong at the weigh ins ready to work not going to let Errol Spence Jr. (8-0, 7 KO’s) (146.8 lbs) escape his powering right hand, Lartey looks to test Spence,Jr not giving him any position to dictate the action of the fight Monday night.