33-year-old DeMarco, the owner of the popular DeMarco’s Boxing Gym in Staten Island, is on a two-fight winning streak and even avenged one of his losses. His fight against the more experienced Thompson will be his first in a year.

Douglin, coming off a disappointing nationally televised loss to Jermell Charlo in his last fight, has chosen a tough challenge to begin his comeback. Rodriguez has fared well and even beaten some good competition.

Also featured that night will be welterweight Shakur Jackson (pro debut) of Newark, New Jersey. Jackson was a heavily decorated amateur boxer and his transition to the professional ranks has been highly anticipated. Jackson’s fight is a four-rounder and his opponent is Cornelius Whitlock (0-0-1) of Hanover, Maryland.

The media is cordially invited to join WBA Super Welterweight World Champion Austin “No Doubt” Trout (26-0, 14 KOs), as he continues his mission of goodwill on Monday, January 28, 2013, at 11:00 am when he visits the Harlem Hospital Center (506 Malcolm X Boulevard at 135th Street in Harlem, New York).

27-year-old Trout has always been active in several charities, especially in his hometown of Las Cruces, New Mexico, and has only stepped up his efforts since his star-making defeat of Miguel Cotto on December 1 at Madison Square Garden.

“This is Austin. This is who he is,” said his promoter, Greg Cohen of Greg Cohen Promotions. “He’s determined to use his celebrity make the world a little brighter for as many people as possible and that’s very important to him. We’re not coming up with these humanitarian efforts he is involved in. It’s all him. Meeting people and giving them the message to never give up is part of what makes Austin Trout the man he is.”

BROOKLYN, January 24 – On Saturday, February 9, Brooklyn’s own Danny “Miracle Man” Jacobs continues his phenomenal comeback following his successful battle against cancer with a 10-round middleweight bout against rugged Billy Lyell that will be featured live on the SHOWTIME EXTREME telecast at 7:00 p.m. ET/PT (delayed on the west coast) from New York’s newest home for world-class fight action, Barclays Center in Brooklyn, N.Y.

“We are so thrilled that Danny Jacobs is getting back in the ring for the third time in less than five months,” said Oscar De La Hoya, president of Golden Boy Promotions. “Billy Lyell is going to do what he can to put an end to Danny’s undefeated comeback streak, but the ‘Miracle Man’ will be hard to stop.”

Following a harrowing, but victorious fight against cancer that kept him out of the ring for over a year, Brooklyn’s Jacobs (24-1, 21 KO’s) returned on October 20, 2012 at Barclays Center and scored an emotional first round knockout victory over Josh Luteran. In December, the 25-year-old Jacobs made it two for two in his comeback when he halted tough Chris Fitzpatrick in five rounds and will seek a similar result in his next bout at Barclays Center against Lyell.

A 10-year professional hailing from Warren, Ohio, Billy Lyell (24-11, 5 KO’s) is a gritty competitor who always shows up to fight when the bell rings. Willing to fight the best competition available at the drop of a hat, Lyell has been in the ring with Julio Cesar Chavez Jr., James Kirkland, Yory Boy Campas and Vanes Martirosyan. He owns a 2009 victory over John Duddy in which he handed the Irishman his first professional loss. A former world title challenger, look for the 28-year-old Lyell to be in Jacobs’ face from start to finish on February 9.

“Micky Ward was a true warrior inside the ropes,” said Hall of Fame director Edward Brophy. “The Hall of Fame is excited to welcome him back to Canastota to help recognize the achievements of his fellow warrior and friend Arturo Gatti.”

Ward and Gatti, who will be inducted posthumously, engaged in an epic trilogy that earned “Fight of the Year” honors for their first and third bouts (2002 & 2003). The two fighters developed a friendship and remained close until Gatti’s passing in 2009.

Said Ward of Gatti’s induction, “He gave it all in the ring. He gave everything to the sport of boxing. He gave the fans what they wanted. He was a great fighter, a two-time world champion and was in ‘Fight of the Year’ four times. I’m really happy for Arturo.”

The fighting pride of Lowell, MA, Ward was one of boxing’s most exciting fighters. He turned pro in 1985 and used a crowd-pleasing style to register a 38-13 (27 KOs) record. In addition to his rivalry with Gatti, Ward scored wins over Shea Neary, Reggie Green and Emanuel Burton. During his career, he was in “Fight of the Year” three times (2001 vs. Burton, 2002 and 2003 vs. Gatti). Ward’s life was portrayed in the Academy Award-winning motion picture The Fighter with Mark Wahlberg starring as Ward and Christian Bale as his brother / trainer Dicky Eklund.

An impressive list of over 40 boxing greats from the United States and abroad are scheduled to participate in weekend festivities.

For more information on the Hall of Fame’s 24th Annual Induction Weekend please call (315) 697-7095, visit online at http://www.ibhof.com, on Facebook at http://www.facebook.com/InternationalBoxingHallofFame and on Twitter at http://www.twitter.com/BoxingHall. 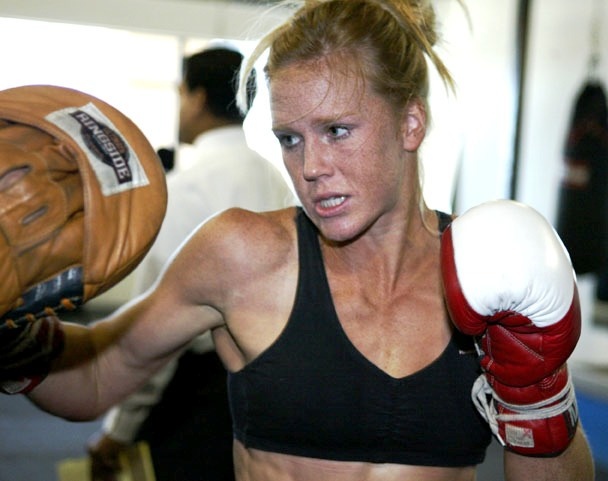 The WBC had awarded the distinction of the Diamond Belt for the Braekhus-Holm fight because “it is regarded as one of the best fights in the history of female boxing.” Sauerland and Fresquez had discussions prior to the WBC’s order and, if the promoters were unable to reach an agreement – negotiations have now broken off due to Sauerland’s announcement that Braekhus is fighting St. John – that the WBC will conduct a purse bid Friday, February 15 at its headquarters in Mexico City.

Sauerland has reportedly requested an exception from the ordered mandatory defense for Braekhus in order for her to fight St. John. Fresquez has requested an answer from the WBC regarding how the Braekhus-Holm purse bid will proceed, as well as having additionally petitioned the World Boxing Association (WBA) to order its welterweight champion, Braekhus, to fight No. 1 challenger Holm in a mandatory defense.

Last December, Sauerland sent a video tape to Fresquez and media outlets, in which Braekhus challenged the WBC & WBA No. 1-rated Holm to a Sauerland-proposed July fight in Las Vegas, which was quickly accepted, pending final terms.

“This is an embarrassment for our sport,” Fresquez said. “Holly Holm is the Queen of Boxing and she was ready to fight Braekhus. They’ve been using Holly’s name for the last two years, so they could build Braekhus’ name, and we’ve been chasing her for that long. Based on their decision to fight Mia, they obviously aren’t serious about fighting Holly. I don’t understand why they challenged Holly and then, after we had accepted their challenge, ducked her again. Maybe they expected certain demands from us, giving them an easy way out of the fight, to make them look good in the media and public. In that video, Breakhus made a big deal about Holly being knocked out by (Ann Sophie) Mathis, but Holly showed the heart of a champion by sticking to her game plan to win their rematch. Braekhus used Holly’s same game plan to beat Mathis. Sauerland and Braekhus have turned their backs, once again, on being in the greatest women’s fight of all-time, which is another black eye for women’s boxing.”

St. John is a two-time world champion who has lost six of 11 fights since her 2005 defeat by way of a 10-round shutout decision (100-90 on all three judges’ scorecards) to Holm.

Here’s a look at a direct comparison between Holm and St. John, in terms of the more legitimate challenger for Braekhus, who also reigns as the World Boxing Organization (WBO) 147-pound female champion:

A new, meaner “King” Carlos Molina is ready to go for his ESPN Friday Night Fights main event at the UIC Pavilion in Chicago on February 1.

29-year-old Molina (20-5-2, 6 KOs) will face two-division and five-time world champion Cory “The Next Generation” Spinks in a 12-round IBF Junior Middleweight Title Eliminator to headline the night of boxing presented by 8 Count Productions, Round 3 Productions, Warriors Boxing and Blue Wave Boxing in association with Don King Productions.

Molina, who divides his time training at Chicago’s 8Count and LA Boxing gyms with trainer Victor Mateo (original trainer Lou Askenette also works the corner on fight night), says he’ll be going into this important fight with a new mindset and outlook.
“They say I don’t have much power, but I’m really working on sitting down on my punches for this fight, especially when he’s on the ropes,” admitted Molina. “I want the knockout. That’s what we’re going for. I’ll make him miss and put constant pressure on him. And as soon as he misses, I’ll make him pay. I’m going to break him down and get him out of there.”

Molina, an underdog in nearly every fight, is switching roles for this one. Fighting at home and sure to be favored by the oddsmakers, he’s in the exact opposite role this time.

“You just have to look at things a different way. Being the underdog motivates you. When everybody thinks you’ll lose, you train hard and fight hard to prove them wrong. Now I’m the favorite fighting in my hometown. I’ll use that as a motivation. I haven’t fought here in over four years. It motivates me to look good and fight better than I ever have.”

Molina says he’s waited a long time for this opportunity and it means the world to him to fight for a world title.

“That’s my goal since I started boxing. I picture in my head winning a world title. Not just one. Maybe a couple straps. And this is the first step to reaching my goal. I set my goals high and that’s definitely what I want. Not even just for me. For everybody that has helped me. I can’t go out and say I did it all myself. I have had a tough road; my trainers have always been with me. It’s tough being a trainer you have to be just as dedicated as a fighter. I want to see the smile on my trainer’s face and my mom and dad’s, my family and everybody that has supported me. I won’t forget who helped me when I win.”

Tampa- The very high anticipated boxing series FightNight Winghouse at the A La Carte Pavilion for scheduled February event has been cancelled. At the present time FightNight Productions and Florida State Boxing Commission cannot iron out certain agreements, Promoter Aaron Jacobs will release a statement shortly on this matter. Tampa Bay has been a gold mind for great boxing events it has recently all gone flat line.