PHILADELPHIA, PA – Highly touted undefeated prospects, featherweight Ruben Villa and lightweight Michael Dutchover visited the historic boxing city of Philadelphia where they took in some of the iconic sites and ate the Philadelphia delicacy of a “Philly Cheesesteak.” Villa and Dutchover are visiting Philadelphia to see co-promoter Banner Promotions, and then on Friday they will head up the Jersey Turnpike to attend the Boxing Writers Association of America Awards Dinner and The Copacabana in New York City.

The two highly regarded prospects also went to the Art Museum and posed with the Rocky Statue, The Liberty Bell and Steak Sandwich eateries, Pat’s and Geno’s.

Villa and Dutchover are coming off impressive performances on May 10th in bouts that were televised on ShoBox: The New Generation that was Live on SHOWTIME.

“My goal is to show Brandon Adams that there are levels to this. You might be a contender, but it’s another thing to be a champion.” — WBC interim 160-LB Champ @FutureOfBoxing, at a press conference today in Houston.

JERMALL CHARLO VS. BRANDON ADAMS HOUSTON PRESS CONFERENCE
“I’m going to finish this fight…You might be a contender, but it’s another thing to be a champion,” Charlo
“I didn’t expect my road to be easy because it’s never been easy for me…The best man will win on June 29,” Adams
Unbeaten Top Middleweight Jermall Charlo Makes Hometown Return to Battle Brandon Adams Saturday, June 29 live on SHOWTIME®from NRG Arena in Houston and Presented by Premier Boxing Champions

Deontay Wilder vs Luis Ortiz rematch plans are seemingly moving ahead with an unnamed fighter set to appear on the undercard claiming that it’s being targeted for Los Angeles. PBC have September dates on hold at the Staples Center.

@dazn_usa Fighters Meetings: “Sometimes the guys that smile in your face are more dangerous than those who act up & talk sh•t.” @anthony_joshua

Photo credits: Pablo Lozano / Press All Star Boxing Inc and Sports Productions. 🇲🇽 In search of the vacancy Junior Lightweight Championship of the North American Boxing Association (NABF) endorsed by the (WBC) World Boxing Council, the capital Jerson Aguilar and the Mexican Eduardo Rizo fulfilled the afternoon of this Thursday with the official weighing ceremony in front of what will be your commitment on the night of this Friday, May 31 at the Villa Flamingos Hall in Mexico City. @wbcboxing @wbcmoro @ppsulaiman @nancyr505 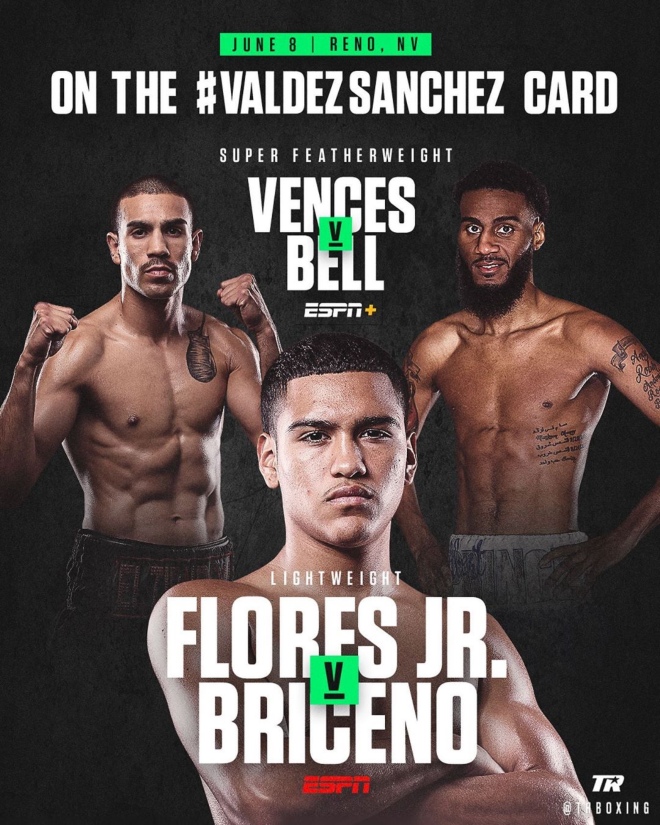 Fresh off a KO victory in his hometown of Stockton, CA, Gabe Flores Jr. returns to the ring to take on Salvador Briceno as the #ValdezSanchez co-feature, June 8 on @ESPN. Plus, Andy Vences v Albert Bell on the @ESPN+ undercard 🥊