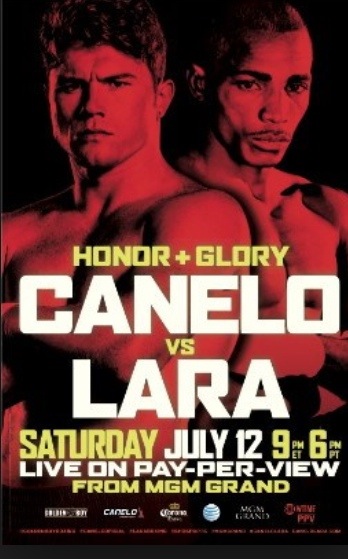 Tune into any of the FOX Sports Network channels: FOX Sports, FOX Sports 1, FOX Sports 2 and FOX Deportes (check your local listings) for a behind-the-scenes look at the stars of this highly anticipated pay-per-view event taking place at the MGM Grand Garden Arena in Las Vegas.

The countdown show, brought to life by Producer and Creative Director of Golden Boy Promotions Leigh Simons, will provide audiences with exclusive analysis and commentary leading up to the PPV-event.

“They both knocked down and decisioned Austin Trout and they both stopped Alfredo Angulo in round 10, which makes for an unbelievable match-up,” said Simons. “This show explores how their recent successes against common opponents could play out against each other on July 12.”

Below is a collection of links, which preview various parts of the special and fight highlights:

– Oscar De La Hoya and boxing experts talk about how Canelo vs. Lara came to be – http://youtu.be/EJSzI5eamPo

– Inside Canelo and Lara’s camps – http://youtu.be/INP8UnHTMvo

Honor & Glory: Canelo vs. Lara” a 12-round junior middleweight fight taking place Saturday, July 12 at the MGM Grand Garden Arena in Las Vegas, is promoted by Golden Boy Promotions and Canelo Promotions and sponsored by Corona and AT&T. In theco-main event Abner Mares returns to face Puerto Rico’s Jonathan Oquendo in a 10-round featherweight bout. In the SHOWTIME PPV opening bout, Johan Perez defends his interim WBA World Junior Welterweight Title against Mauricio Herrera in a 12-round match up. Also featured, Juan Manuel “JuanMa” Lopez meets Francisco “El Bandido” Vargas of Mexico in a 10-round bout for the WBO International Super Featherweight Title.

The event will be produced and distributed live by SHOWTIME PPV beginning at 9 p.m. ET/6 p.m. PT. The event can be heard in Spanish using secondary audio programming (SAP). For information visit http://www.SHO.com/Sports. Canelo vs. Lara will be shown on the big screen in movie theaters across the country via Fathom Events. Information will be available at http://www.fathomevents.com. 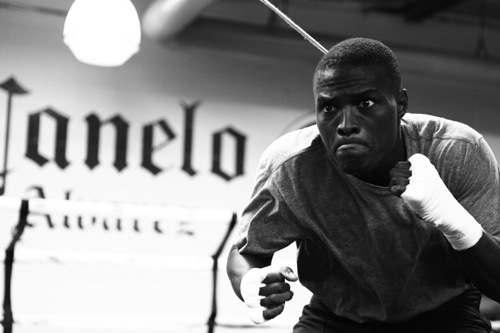 Quillin stands tall in the division orthodox fighter promoted by Golden Boy Promotions. Looking to keep his WBO title and fight for more. Quillin like a ticking bomb training in California a fast starter training hard and knowing the phone is going to ring he will be back in the ring very shortly.

A entrance worthy of a Middleweight champion with the hopes of challenging Gennady Golovkin, Miguel Cotto, Marcos A. Rubio, Sam Soliman all title belt holders in the 160lbs division.

There is legitimate competition in the division, Quillin physically and mentally strong enough to take on those challenges. 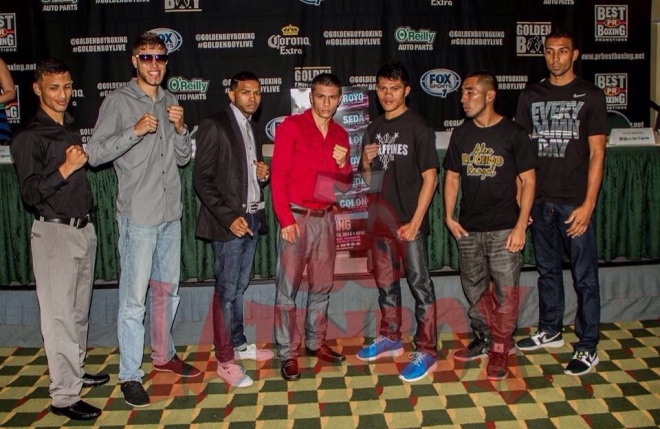 World contenders McWilliams Arroyo, from Puerto Rico, and Froilan Saludar, from Philippines, will face in an International Boxing Federation (IBF) flyweight elimination bout this Thursday, June 19, at the Ruben Rodriguez Coliseum in Bayamon, Puerto Rico, in a Golden Boy Promotions presentation, in association with PR Best Boxing Promotions (PRBBP), to be broadcasted on Fox Sports 1 and Fox Deportes at 8:00 p.m. (ET).

Also in the show, world title challenger Cesar Seda Jr. will return to the action in Puerto Rico, along with prospects Prichard Colon, Milton Saniago and Jose Lopez, among others.

“This Thursday we will back to the Ruben Rodriguez Coliseum with a great show and a big fight that will define the future of McWilliams Arroyo, who fight against Froilan Saludar for the top of the IBF flyweight rankings. It is an important step for McWilliams on his way to a world opportunity, and the fans can enjoy the fight live in the arena or on TV on Fox Sports 1 and Fox Sports”, promoter Ivan Rivera, president of PRBBP, said. “Also in the show world contender Cesar Seda Jr., who is in his way to return to a world fight, and young fighters like Prichard Colon, who will try to extend his unbeaten record. It will be a great night with Golden Boy Promotions and again on Fox Sports 1 and Fox Deportes”.

In the co-main event, Cesar Seda Jr. (25-2, 17 KOs), a world title challenger in 115 and 122 pounds, will fight in a 10 rounds superbantamweight bout against Mexican Alex Rangel (15-2-2, 9 KOs). Seda Jr., who came off an unanimous decision defeat on December, 2013, against the WBC superbantamweight champion Leo Santa Cruz, is ranked #6 by this entity in the 122 pounds.
In a fight scheduled to eight rounds in the super welterweights, Prichard “Digget” Colon (9-0, 9 KOs) will fight for the fifth time this year when he faces veteran Carlos Garcia (7-12-1, 7 KOs).

Prospect John Karl Sosa (10-0, 6 KOs) will not fight because he is sick with a virus. 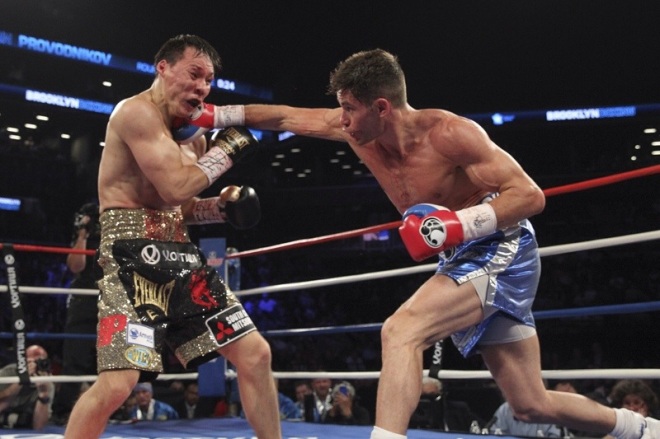 Brooklyn – In front of a huge crowd at the
Barclays Center in Brooklyn, New York, and an audience watching the telecast around the world including HBO in the United States, Joe DeGuardia’s Star Boxing had a night to remember as “The Pride of Huntington, New York” Chris Algieri shined in a twelve round split decision over World Boxing Organization (‘WBO’) Junior Welterweight Champion Ruslan Provodnikov.

In the televised co-feature Star Boxing’s WBO Junior Middleweight World Champion Demetrius “Boo Boo” Andrade was dominant in his first title defense, stopping mandatory contender Brian ‘The Lion” Rose of England at the 1:19 mark of the seventh round.

Now 20-0 with eight knockouts, Algieri talked on Sunday about the fight. “Ruslan’s whole plan was to run right through me, after the first round I just boxed smartly and stuck to my game plan. I get the sense he didn’t have a plan B me.”

“I took the knee in the first just to check on my eye and although he did crack me in the ribs while I was down I think it was inadvertent. It was never a dirty fight, no low blows or anything.”
Despite being knocked down in the first and also taking a knee in the same stanza, Algieri boxed beautifully throughout the duration of the fight winning a split decision by scores of 114-112 (twice) and 109-117.

Despite being knocked down in the first and also taking a knee in the same stanza, Algieri boxed beautifully throughout the duration of the fight winning a split decision by scores of 114-112 (twice) and 109-117.

About giving Ruslan a rematch if requested and his future plans, Algieri stated, “He didn’t want to fight me in the first place, I doubt he’d want a second fight. Bob Arum had mentioned he’d like to promote a fight between Manny Pacquiao and myself. I’m ready to go straight into that fight for the fall.”

“These last couple of years I’ve move exponentially to the right fights, last night was a continuation of that and going forward that’s the plan I want to keep.”

“It was one of the biggest nights in Star Boxing’s 22 years. We knew Chris was in a very tough fight against Ruslan who is one of the sport’s most aggressive, hard hitting fighters,” said DeGuardia. “But Chris and I accepted the fight right when it was offered because we knew Chris had the skill set, as he showed last night to defeat Provodnikov and win the world title.”

“And Demetrius truly defended his title in style. He rose to the occasion and showed the world why he’s the best junior middleweight in the world. No hesitation whatsoever, he will fight anyone next at 154.”

Making the first defense of his world title earned by defeating Vanes Martirosyan in November, Andrade improved to 21-0 with 14KO’s by dropping Rose hard in the first and third rounds. Relentlessly keeping the pressure on and scoring at will, Andrade earned the stoppage when Rose’s corner smartly threw in the towel. 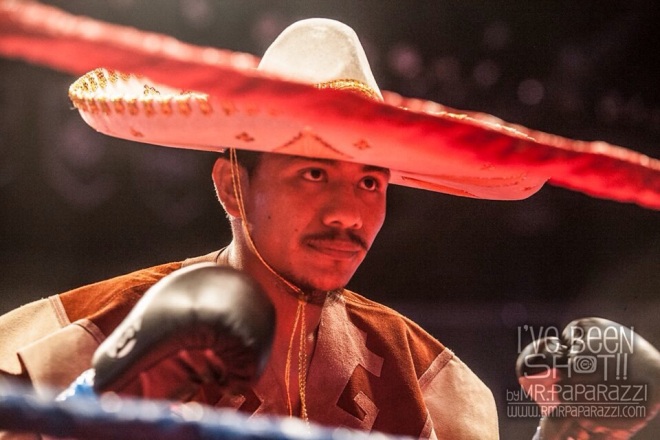 Lightweight rising star Jose “Lil Pacquiao” Resendiz (3-0,1 KO) from Bradenton, Florida. Gets his 1st KO win last night at the Tampa Bay Times Forum against Kherani Kessoon stoping him at .51 seconds of round one. Resendiz promoted by OnePunch Boxing Promotions & Management jumped on Kessoon right from the opening bell with an attack sealing the victory quickly.
Photo credits: Robert Richards 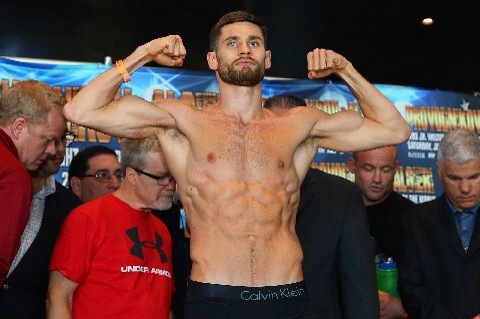 Algieri heads into the main event a perfect 19-0 with 8 opponents unable to reach the final bell. His opponent, a man who has stated in the promotion to this fight and his past bouts as well; he is willing to die in the ring to defend his championship. The cards are stacked against Algieri, but he remains cool, calm, and collected. After speaking with Algieri, it seems as if he is completely impervious to the enormity of the situation.

Algieri was very confident during our meeting; he stated that this training camp was the best of his career. The Long Island pugilist knows that he and his opponent are polar opposites stylistically. Chris understands that he must assume the role of the matador and evade the brutal bull like attack of Ruslan Provodnikov. Algieri plans to use his educated jab and lightening quick combinations to not only stave off the Russian, but if the opportunity arises: put him down for good. In addition the change of venue (originally scheduled to take place at Nassau Coliseum but moved to The Barclay’s Center) to accommodate the champion’s fan base, has not fazed the Huntington born boxer. “My fans will be the majority at The Barclay’s, many people will commute from Long Island”.

Algieri not only enters the ring undefeated, but he also brings with him a strong academic background. The Long Island based fighter graduated from Stony Brook University (the Harvard of Long Island) with honors and attained his Master’s Degree in Nutrition at NYIT. He believes his cerebral approach will assist him to victory.

Chris fought intelligently in February, dominating a solid opponent in Emmanuel Taylor, which served as the precursor for this fight. Despite conceding the edge in power and possibly hand speed, Algieri painted a two fisted masterpiece out boxing Taylor intelligently to a unanimous decision victory. Chris believes that Provodnikov will be no different; his astute knowledge of the sweet science will out shine the bright lights in the Barclay’s Center.

Tonight, do not be surprised if you hear “And the new WBO Junior Welterweight Champion of the World!” announced by Michael Buffer. Chris Algieri plans to fulfill his life long dream at the Barclay’s Center, regardless of his underdog status. June 14th marks the day the world will know Chris Algieri. 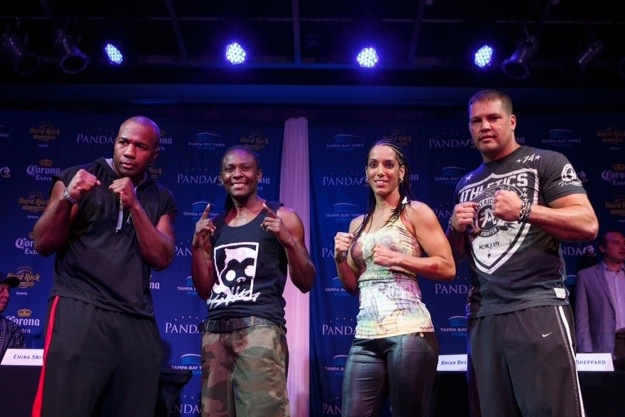 The Tampa Bay Times Forum and Panda 5 Star Productions partner to present THUNDER AT THE FORUM, a World Boxing Federation event, on Friday, June 13, at 7:45 p.m. This high-voltage event boasts a 10 round main event face-off for the North American WBF Heavyweight Title with China “The Dragon” Smith (34-4, 27 KOs) vs West Virginia’s Mike Sheppard.

In a unique twist, the co-main event will be a female match-up featuring local favorite “Fists of Steel” Chevelle Hallback (28-8-2, 11 KOs). Hallback was recognized on Ring Magazine’s Top Ten Women’s All Time Pound for Pound list and is considered one of the top female fighters of all time.

The fight card is as follows: