Sarasota, FL – New Faces in the Lightweight division fighting out of Sarasota, FL. Jose “Pacquiao” Resendis (1-0) stands as one of the most exiting young Mexican talents coming out of Florida.

A short armature carrier due to a life of the streets and gangs there seemed to be no way out for Resendis who lives to fight, Coming in contact with Aaron Avalos currently trainer and manager adopted in the troubled Resendis to La Fe Boxing Club were his journey as a fighter came to a start.

The hard minded Resendis responded like a natural, many fighters would come to the gym to face intensive sparring from the fast developing Resendis who just continues to work harder at his skills.

This kid has power and heart, It will direct him on a course to become one of the most exiting fighters in the world, I expect him to think big.

Tori “Ruthless” Ramirez gets his second professional win by TKO in the 3rd round on the undercard of Danny Santiago fight card at the Southeastern Livestock Pavilion in Ocala, Florida.

Ramirez from Bowling Green, Florida. scheduled to be back in the ring in the beginning of the year under All Star Boxing, Inc. Tuto Zabala,Jr. show.

Ramirez started off great as a huge draw in the Tampa area, He is a fighter in superb condition, throws lots of punches, extremely entertaining and competitive when he fights.

Ramirez is on a course in my view not to fight cup-cakes, I look for him to perform dazzling and compete with good record opponents, His chin showed to be firm I like the way he throws his combinations mark my word he is one of the most exiting young fighters coming out of Florida.

St. Petersburg, FL. – In the main event held at the Hilton
Bayfront in downtown St. Petersburg. Clarence “The Truth” Booth dominates
Terry Maurice Cade in 2 rounds as referee Sam Burgos jumps in to stop the
action at 1:33 of the 2nd round as Booth wins by TKO victory.

Undefeated Amos “2 Smooth” Cowart in a all out war
against Puerto Rico’s Jose Valderama, who didn’t come to St. Pete to back down.

Cowart born a puncher jumped in from the bell as both fighters gave a high
entertaining fight to the fans on hand at the
Hilton Bayfront.

Valderama matched him punch per punch but started
too loose composure and was broken down by Cowart who stops him at .21 of the
4th round by TKO.

Undefeated Welterweight Miguel Cruz made music tonight
crushing Darrel Jones at 1:23 of the 2 round by TKO victory, Cruz a
ridiculously easy assignment Jones did the best possible but not enough to stop
the quicker hands of Cruz.

Tampa’s Mike Bissett in 1 day notice took the fight with Dan
“The General” Bolden who was cut down by Bissett winning the
unanimous decision 40-35 on all 3 judges cards. Bissett spent his week sparring
with Heavyweight contender @antoniotarver that clearly showed thumbs up in the
bout for Bissett.

Featherweight Christopher Sanchez
dropped with a left hook the the body by Shane Tenney at .45 of the 1st Round.
Referee Sam Burgos reaches the count to 10. Tenney wins by TKO victory.

Lightweight Antonio Ojeda in his Debut dominates William
Fauth ending his night with a TKO at 2:11 of 2nd round.

Puerto Rican Heavyweight Carlos “Chicano” Cotto won a 4 RD unanimous decision over Sandy Antonio Soto improving his record to (6-0, 4 KOs). Cotto a young crowed pleaser action fighter dominated most of the pace and action in the fight loading up his left hand on Soto all night long. Cotto -“We got the victory, I am very happy to go to the distance and push myself, we will be back soon” Chicano said. 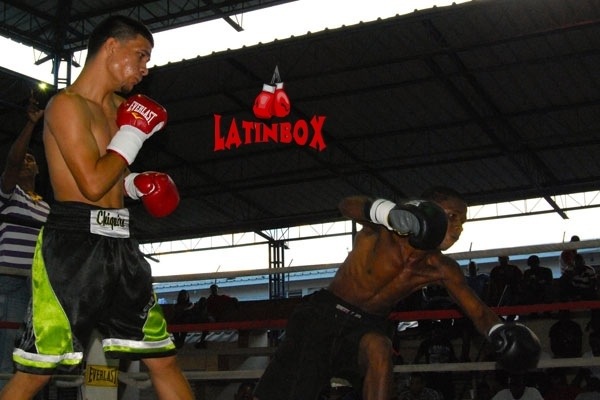 Super flyweight prospect Jose “Chiquiro” Martinez remain undefeated and improved his record to (10-0, 7 KOs) when he stopped Domingo Berroa in the 2nd round with a brutal body shot. “I felt great today. We had a great camp and we got our fifth victory this year. Can wait for next year to dominate my division” Chiquiro said

Jr. Flyweight Janiel “Pototto” Rivera (9-1, 6 KOs) from Catano returns to the ring after facing his first lost back in July. Rivera a kid with a fighters character to his credit this kid can “crack”.

Cotto Promotions building traditions with very great young talented fighters rising out of the Island, In action Miguel “Mikito” Soto (11-1, 11 KOs) a dominating fighter who is bursting as a well developed threat. Charlie Clemente (5-0, 3 KOs) loves to throw hooks and likes to outbrawl his opponents, Angel “Pito” Fret (15-0, 12 KOs) will be making his debut fighting in town of Vega Alta this fighter has great blasting punches and knock out power.

Other fighters on the card looking to make an impact are Jose Rodriguez and Eric De Jesus making there pro debut.

The 30-year-old Quillin, fighting out of Brooklyn, is the only top-rated 160-pounder aligned with Showtime. The marquee-name middleweights, Sergio Martinez (WBC/Ring Magazine champion) and Gennady Golovkin (WBA), fight exclusively on rival HBO.

Quillin relishes the opportunity to fight any of the top rated middleweights, but he also understands the politics of boxing and the situation it has presently placed him in. “It’s not up to me who I fight,” Quillin said. “If the money is right, I’m up for fighting any of the top names, especially Martinez and Golovkin, but everybody’s aware of what’s going on behind the scenes (Showtime vs. HBO). My job is to work hard and be ready. I have the most powerful team in boxing (Golden Boy Promotions, adviser Al Haymon, co-managers John Seip and Jim McDevitt) and they get me the best available deals. I’m not worried about who I’m fighting. They come to me with my fights.”

Here’s how Quillin breaks down the top middleweights in the world, not listed in any particular order:

Sergio Martinez: “He is the one everybody has as No. 1 in the middleweight division. Martinez has fought some very exciting fights. He’s a showman in the ring.”

Gennady Golovkin: “A power puncher. Golovkin brings power into the ring and gets a lot of knockouts.”

Darren Barker (IBF champion): “He always puts his best foot forward and always tries as hard as possible. Barker and I would bring a lot of fireworks into the ring.”

Daniel Geale: “Another exciting fighter who bangs with the best. It worked for a while against Barker.”

Felix Sturm: “I haven’t seen too much of him. I hope Sturm pursues more fights to make the middleweight division even tougher than it is right now.”

Martin Murray: “He is determined and exciting. I can’t take anything away from Murray.”

Peter Quillin: “A very exciting guy always looking for new ways to win. He has power, showmanship and a lot of smarts in the ring.”

Quillin recently overcame personal heartache in his second title defense victory, by 10th round technical knockout over a game Gabriel Rosado, who suffered a serious cut over his eye that resulted in the fight being halted on the advice of the ring doctor. While he was in the middle of training camp in Los Angeles, Quillin’s wife, Allison, suffered a miscarriage five months into her pregnancy. She was home in New York City.

“I struggled with it,” Quillin admitted. “I was obligated to camp, 3000 miles away, and she had to go through it without me being there to comfort her. We’re praying together and I’m working on being more compassionate.”

Quillin is already back in the gym, going through light workouts and yoga. “I took a week off and bought my dream car (red Corvette Stingray),” he added. “I get depressed when I’m not working out. My wife goes to work and I’m all alone.&nbs