fulfill your dream to popularise a poster

at the Coliseo Roberto Clemente in San Juan, P.R. “There are already few days. I am well happy because I know that it nears fight with my people the most. Well grateful with God and the company Top Rank for all the opportunities that have been presented to me in my short career,”said the ever-smiling fighter. “ 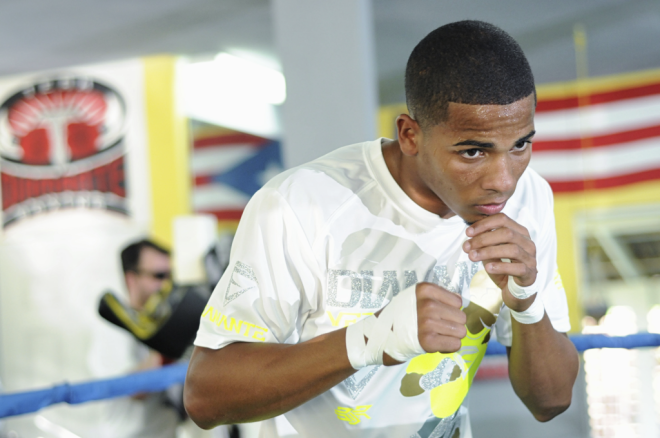 On December 11th what I want to see the most is a party of people. I want to give my people a nice fight and put well up my flag, so that even for a moment forget so much bad news and we celebrate all United,”said Verdejo.
We want that on 11 December the Colosseum seem a party of people who will bring their tambourines because that night we are a rumbón large the most good,”said Ricky Márquez, trainer and handler of Verdejo. 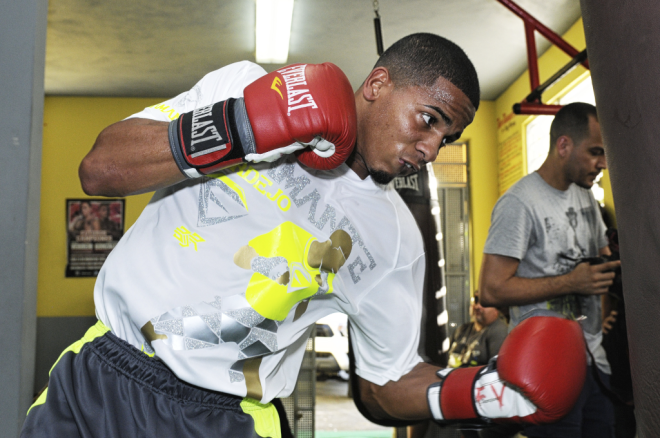 as for his left hand operated, Verdejo said to be at 100 percent to his return to the roped. “Thank God there is no discomfort in the hand, and we are ready for a big fight on December 11,” concluded saying the undefeated former Olympian.

FROM THE BELL CENTRE IN MONTREAL

Earlier this year, on March 14 at Montreal’s Bell Centre, Kovalev beat Pascal by TKO in the 8th round. But Pascal’s side said the 35-year-old Quebec-based boxer would make amends this time around.

“Jean Pascal put Sergey Kovalev in trouble in several rounds in the first bout, and I’m convinced he will be even better this time around,” said InterBox President Jean Bédard. “We’re in for a great fight and that’s why it didn’t take much time for HBO to decide to broadcast this rematch.”

“I’m not a talker, I’m a fighter,” responded Kovalev. “I’m will make him close his mouth once and for all on January 30.”

“Not many boxers have agreed to step into the ring with Krusher a second time, so Pascal must be respected for showing the guts to do it,” said Egis Klimas, Kovalev’s manager. “So even though I don’t agree with much of what Pascal says, I respect the warrior that he is.”

Like the first fight, the rematch will take place on Pascal’s turf and is expect to attract a large crowd at Bell Centre.

“Krusher likes to fight in his opponent’s city because he loves to disappoint the opposing boxer’s fans,” said Kathy Duva, CEO of Main Events, Kovalev’s promoter.

Since the first Kovalev-Pascal fight, Kovalev beat Nadjib Mohammedi (37-4-0, 23 KO) by knock-out in the third round on July 25 in Las Vegas, while Pascal beat Yunieski Gonzalez (16-1-0, 12 KO) by unanimous decision in 10 rounds while fighting on the same card.

Pascal said he will leave home for the next two months to prepare in the United States for the January 30 fight. He will spend part of his camp south of the border with Freddie Roach, his new trainer.

“It will be a sacrifice to spend Christmas and New Year’s Day away from my loved ones, but it will be worth it. I’ll be celebrating the New Year with style on February 1st!”

“This time around, preventing Kovalev from going ahead with combinations will be key. That will be part of my game plan,” said Pascal.

“I will give it my all, I will apply all the skills I have and put them into this fight,” said Kovalev.

@jamesdegale_ vs @butelucian
IBF super middleweight world champion James “Chunky” DeGale (22-1, 14 KOs) retained his title with a hard-fought unanimous decision over former world champion Lucian Bute (32-3, 25 KOs) on Saturday night at the Vidéotron Centre in Quebec City. Bute showed his metal as a veteran warrior maintained steady attack on the very quick handed DeGale responded with whipping shots to Bute head pressing the action in a back and forth exciting fight,There was no question DeGale gave it but he also took it from the bravely Bute as DeGale was busier, but a motivated Bute did his share of damage too but fell short in the judge scores were 116-112, 117-111, 117-111.

Flyweight Leighandre “Baby Lee” Jegels (5-0, 5 KO’s) from East London, South Africa had a very strong outing and was able to maneuver her power shots effectively right from the opening bell catching Yohana Janet Rodriguez (2-1, 1 KO’s) flush putting her down ending her night by TKO in round one at the Selbourne Park, East London, S.A. Fight card Presented by Jijuta Promotions

Klitschko deals the wrong hand tonight as he stood in the center of the ring with Tyson Fury if to say “Why am I still doing this”!! Klitschko from the start of the fight just couldn’t adjust to the entertaining Fury dancing around the ring but campaigning scoring shots throughout the contest keeping the former champion Klitschko thinking way too much and not landing as frequent as Fury.

No argument in the judges scoring but the unique Fury overwhelmed with celebration after the announcement from The prestigious Michael Buffer gave the boxing world his moment by singing in the middle of the ring after the fight. @hboboxing

CUADRAS FINDS A WAY TO WIN

Carlos Cuadras (34-0-1, 26 KO’s) celebrates just before the final bell and retains his WBC super flyweight belt in a less tasteful unanimous decision win over Japanese fighter Koki Eto (17-4-1, 13 KO’s) I like the fact that Eto had nothing to loose he took edgy risk early on and was walking into Cuadras punches scoring the early part of the contest, the all was going well for Caudras then “Who turned out the lights” he just shut down mid way in the fight Eto was tattooing him landing hard shots right to Cuadras face responding by just going straight back jumping on the bike the second part of the contest surviving a victory. Judges scores 116-112, 117-111 (2x). @wbcboxing @wbcmoro @wbcgreenbelt @promodelpueblo 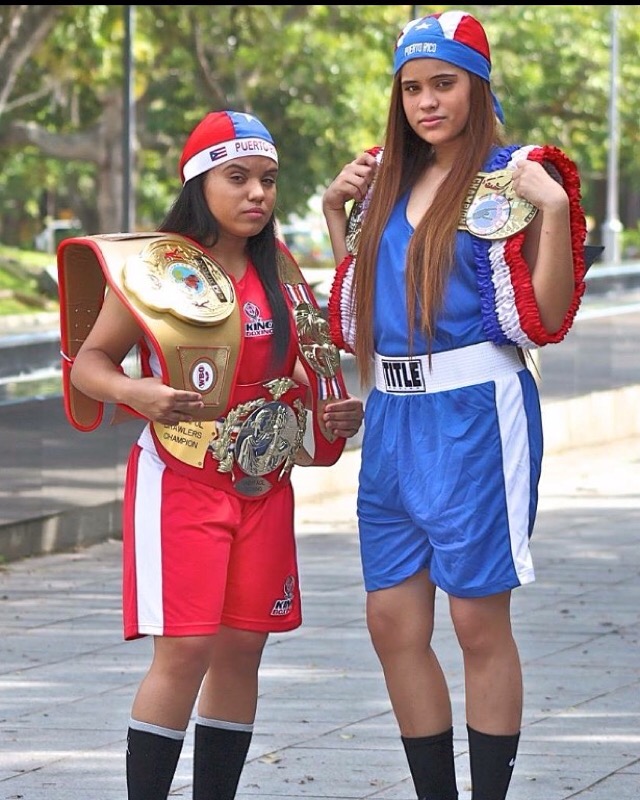 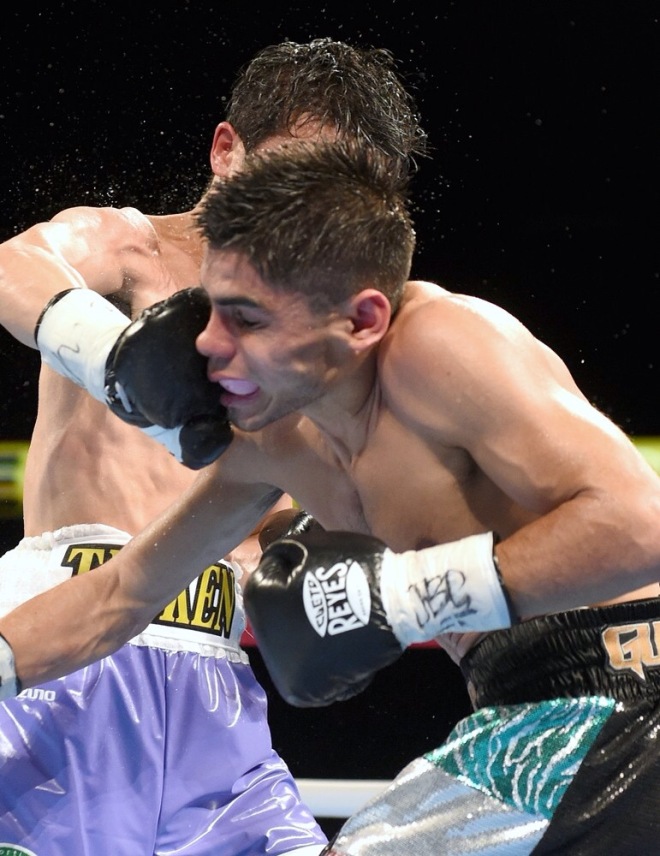 KIMURA GETS SUPERSTARDOM WIN OVER GUEVARA

Japanese star Yu Kimura (18-2-1,3 KOs), was the spotlight taking matters in his own hands astoundingly dethroned highly regarded WBC light-flyweight champ Pedro Guevara (26-2-1, 17 KOs), from Mexico, by a hard-fought but well-received split decision, and yes his accomplishments certainly matched his appeal in this contest by taking the decorated Mexican warrior into deep waters over twelve heated rounds on Saturday in Sendai, Japan. The Judges scores were (115-113 twice for Kimura, 111-117 for Guevara). @promodelpueblo @wbcboxing @wbcmoro @wbcgreenbelt 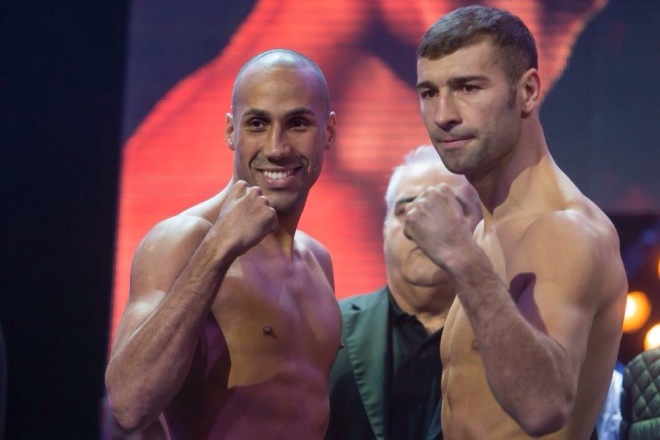 *Charlo lost .4 lb and made weight on the second try

Errol Spence 147 vs. Alejandro Barrera 146.4
*Spence lost .2 lb and made weight on the second try