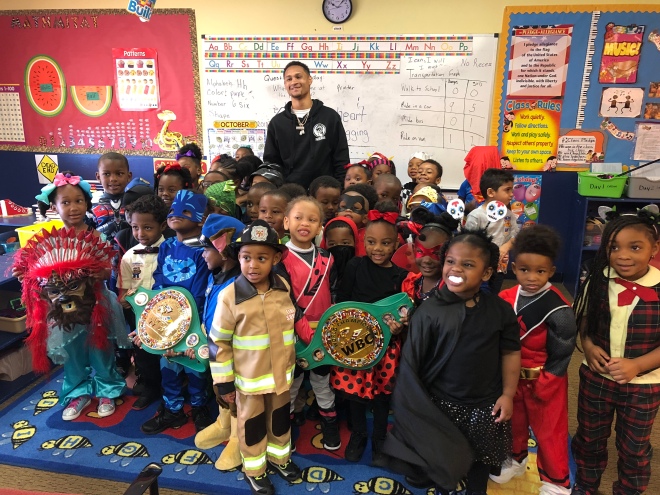 Regis Prograis continues to do wonderful things in the community of New Orleans today paid a visit to the McMillan First Steps Community development Corp. were he signed autographs and took hundreds of photos with the Children. Prograis just coming off his huge win last week on the World Boxing Super Series against the tough Terry Flanagan stays on course with being very involved in the community.

McMillian’s First Steps Child Care started in March of 1988 and is a fully Class (A) licensed school and interactive learning center serving children from infants through Pre-K (6 weeks through 6 years). McMillian’s First Steps Academy was added in 2013 and currently serves kindergarten through 5th grade. The school is full-service and offers indoor and outdoor gross motor areas and an experienced teaching staff all of whom are CPR and First Aid certified. It has 2 distinct buildings and over 14,000 square feet for unlimited learning with an emphasis on an individualized curriculum. 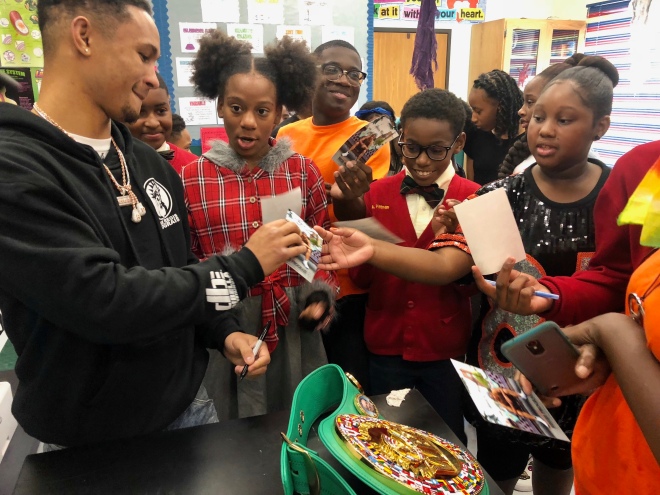 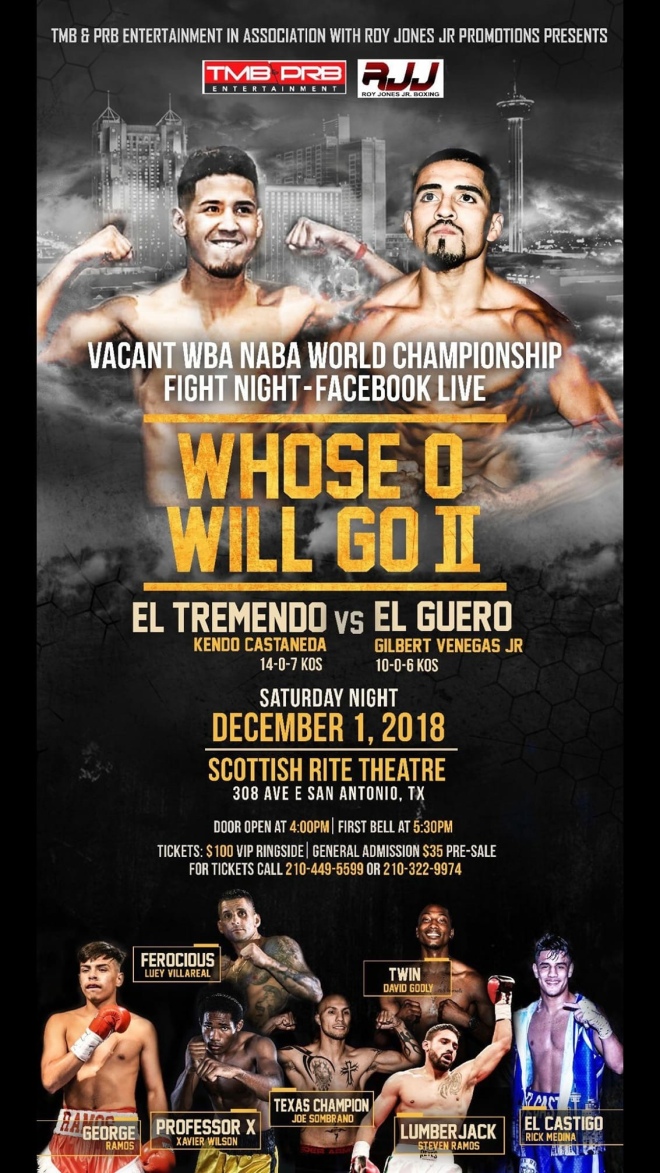 SAN ANTONIO, TX – TMB & PRB Entertainment and Roy Jones Jr. Boxing Promotions, present “Whose ‘0’ Will Go 2”, a live boxing event taking place at the Scottish Rite Theatre in San Antonio, TX, on December 1, 2018. In the 10-round main event, undefeated super lightweights Kendo Castaneda (14-0, 7 KOs) and Gilbert Venegas Jr. (10-0, 6 KOs), will battle for the vacant WBA-NABA title. The entire card will be streamed via Facebook’s FIGHTNIGHT LIVE channel, which has already served more than three million fight fans since May 2017.

Venegas age 24, is coming off an impressive unanimous decision victory against Armando Cardenas (9-2, 5 KOs), a fight that took place at the Scottish Rite Theatre on September 8, 2018. With momentum on his side, Venegas is determined to remain unbeaten with a victory against Castaneda.

“Castaneda comes in with an undefeated record, so this will no doubt be my toughest opponent of my career, but a fight I believe I can win.” stated Gilbert Venegas Jr. “I’ve worked very hard to get into this position, to fight for a title, so rest assure, I’m not going to let this opportunity pass me by. Being that this will be my first shot at a title, you better believe I’m coming to win, and win impressively. I’m going to be the new NABA super lightweight champion and on December 1st, my hands will be raised in victory.”

The 24-year old Castaneda, who is promoted by Roy Jones Jr. Boxing Promotions, recently defeated former WBC United States Champion, Jesus “Chuy” Gutierrez, by 8-round unanimous decision. With the victory, Castaneda, who resides in San Antonio, TX, will look to keep his undefeated record in tact against Venegas.

“I’m predicting a tremendous performance,” said Castaneda. “I’m ready to razzle and dazzle, graze them and daze them, confuse and abuse them. Getting a NABA title shot on my second fight with Roy Jones Jr. Boxing represents a huge door being kicked down for me. If I can’t beat a guy like Venegas, I have no business in boxing.” 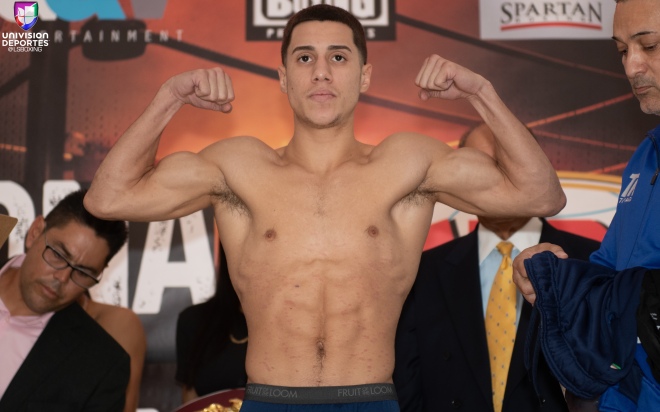 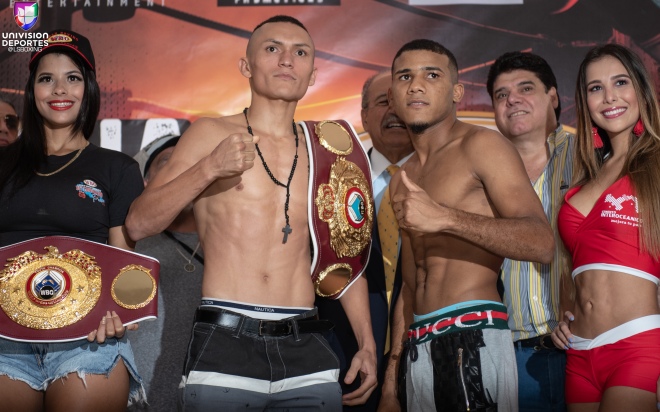 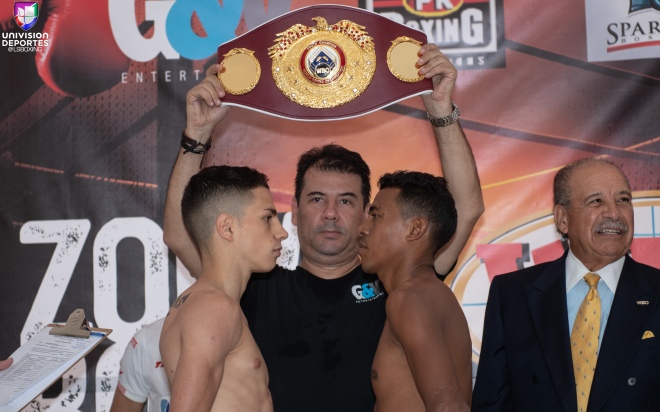 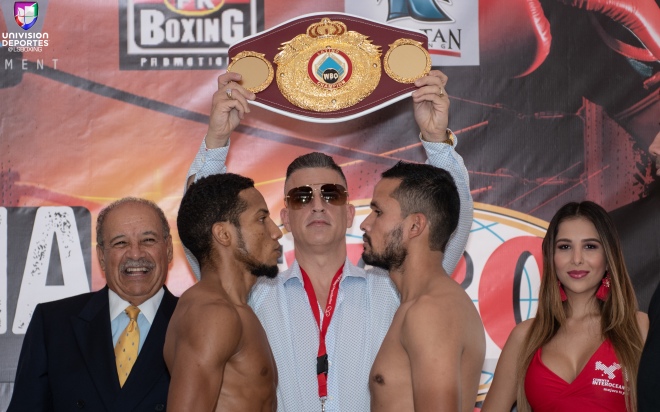 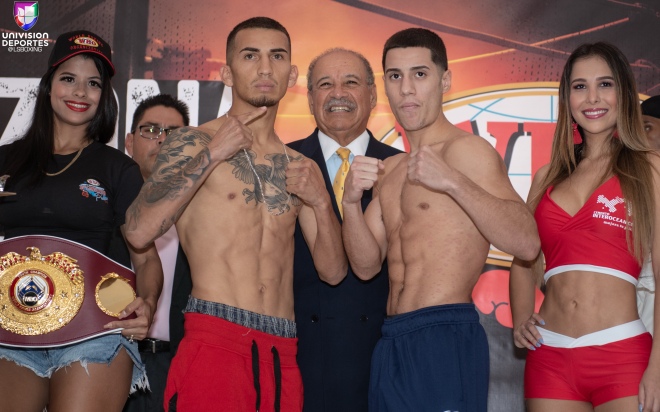 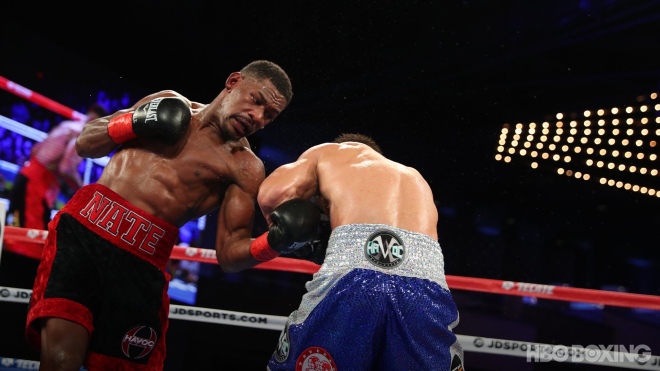 New York -Daniel Jacobs wins IBF middleweight title, Daniel “The Miracle Man” Jacobs (35-2, 29 KOs) scored a twelve round split decision over previously unbeaten Sergiy “The Technician” Derevyanchenko (12-1, 10 KOs) on Saturday night inside the Hulu Theater at Madison Square Garden in New York City. Jacobs scored a flash knockdown at the end of round one with a hard shot to Derevyanchenko head They continued to trade big shots as the rounds progressed with both fighters having their moments. Judges official scores 115-112, 115-112 Jacobs, 114-113 Derevyanchenko. 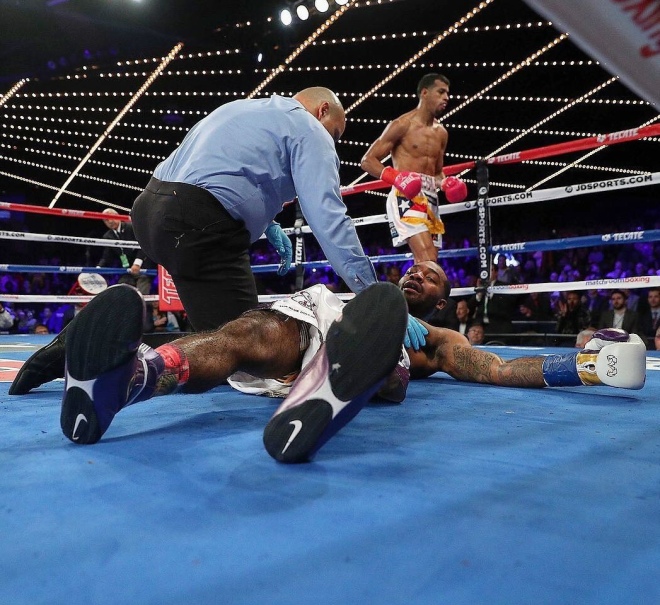 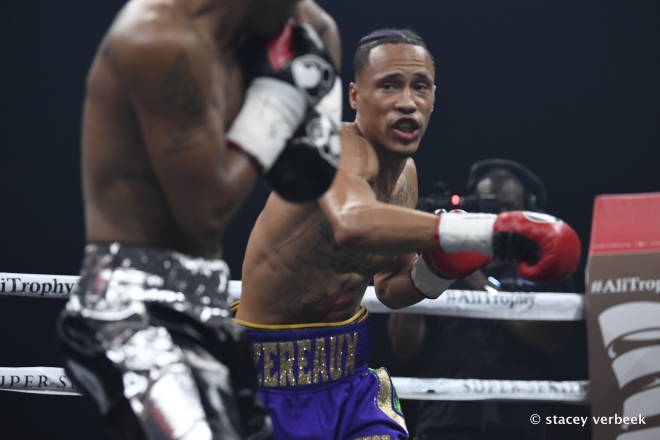 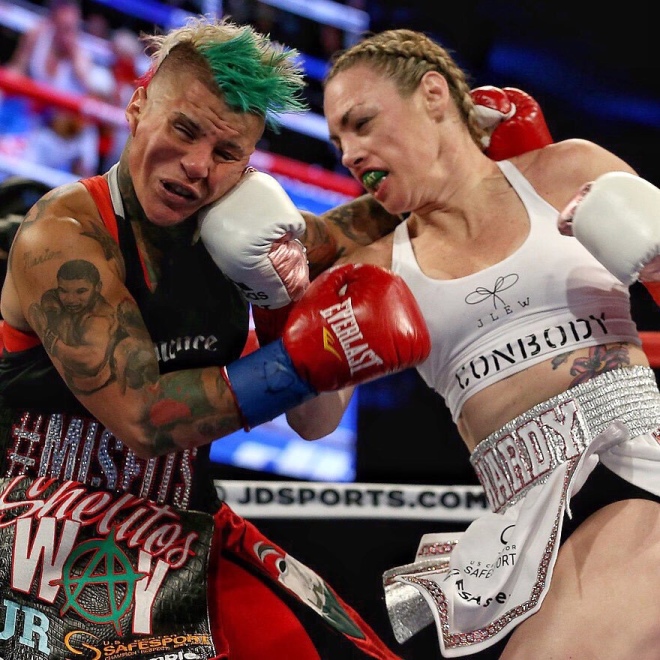 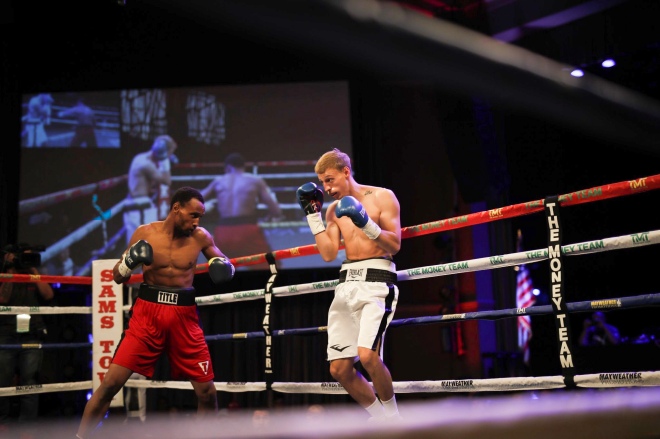 Las Vegas,NV – Elliot Brown gets a first round knockout over Dylan Bamber-Cox! #SinCityShowdown 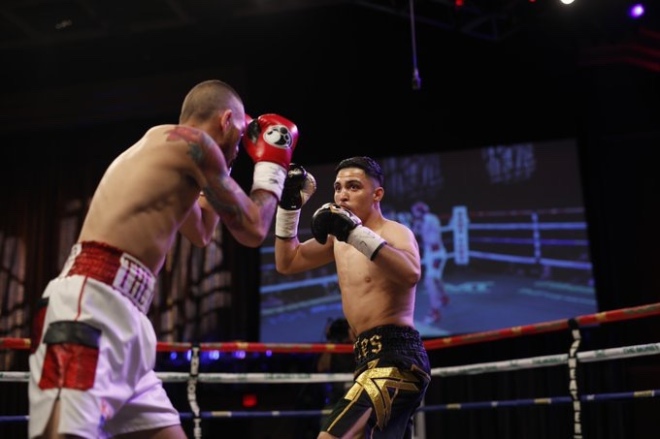 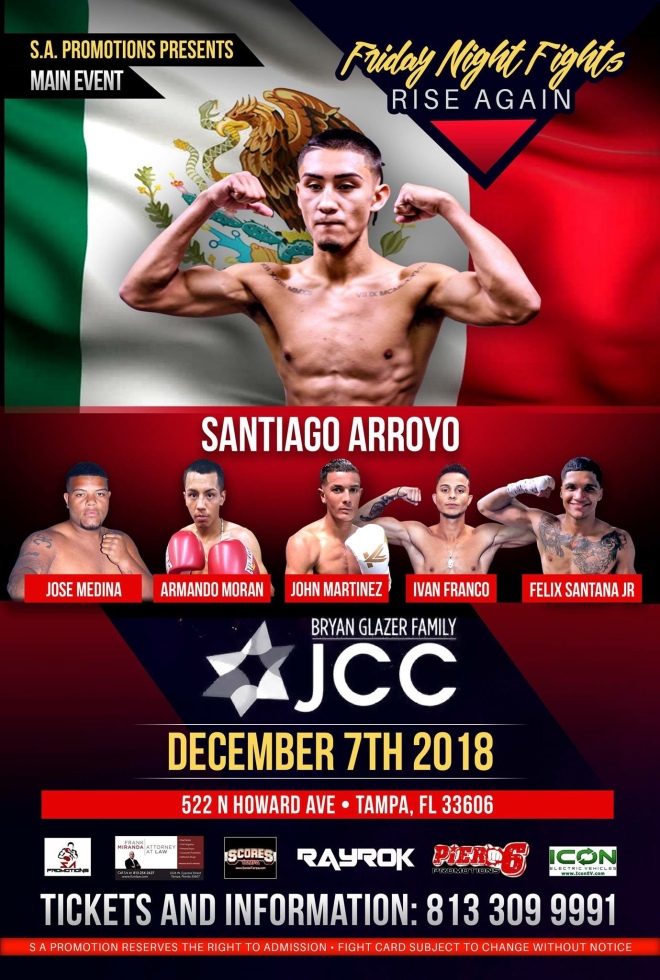 Co-Featured coming soon:) Heavyweight Jose “The Dream” Medina (4-1, 1 KO’s) from Lake Wales, Florida takes on an opponent to be named in a Heavyweight bout.

Lightweight Armando Moran (1-0, 1 KO) from Wahneta, Florida. takes on an opponent to be named in a Lightweight bout.

Lightweight Felix Santana, Jr. (3-0, 3 KO’s) from Ocala, Florida. returns to the ring after his KO victory back in August against Tommy Logan.