@trboxing Super Lightweight Arnold Barbosa, Jr. (10-0, 4 KO’s) put Robbie Cannon (15-11-2) lights out at the official time of 2:59 of round one via KO victory referee Eddie Hernanez puts a stop to the bout.
Photo credits: @4mikeywilliams 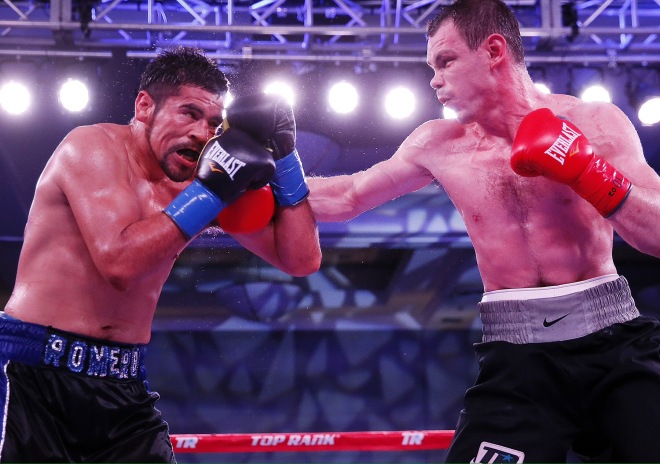 @trboxing Light Heavyweight Egor Mekhontsev (11-0, 7 KO’s) keeps his perfect record in tact by outworking tough Mexican warrior Felipe Romero (19-11-1, 13 KO’s) to a unanimous decision victory. Romero was put down in round one and five. Fight got a bit messy as Mekhontsev cut in the forehead by accident head butt in round three. Romero cut under left eye from accidental head butt in round five. Judges cards 70-80 (3x) in favor for Mekhontsev.

I want to give a special thanks to Gilberto on giving my grandpa a special gift. A very unique WBA “Super Champion” Belt for everything he has Done

@alexisrocha777 ALEXIS ROCHA SIGNS A PROMOTIONAL CONTRACT WITH GOLDEN BOY PROMOTIONS AND IS CONFIRMED FOR HIS PRO DEBUT ON MARCH 4.

LOS ANGELES – Southpaw amateur standout, Alexis Rocha of Santa Ana, Calif. has signed a promotional contract with Golden Boy Promotions today and will make his highly anticipated professional debut on the March 4 edition of LA FIGHT CLUB in downtown Los Angeles. The six-time national champion will be following in the footsteps of older brother and current WBC Silver Featherweight Champion, Ronny Rios, who signed on with Golden Boy Promotions early in his career in 2009. “Golden Boy Promotions has always treated us like family and I am excited to start this new phase of my career,” said Alexis Rocha. “When the opportunity came to make the transition and become a professional fighter, the decision was easy. I want to make Golden Boy proud.” “I’m pleased that Golden Boy Promotions has added another top talent to its stable with Alexis Rocha,” said Oscar De La Hoya, Chairman and CEO of Golden Boy Promotions. “Alexis has an incredible story, one that I hope inspires many other children and young adults to work hard and lead healthy lifestyles. I know Alexis will shine in his professional debut because he has the talent and the drive to become a champion.” “I have been working with Golden Boy Promotions for a number of years now and it definitely made our decision much easier,” said Hector Lopez, trainer to Alexis Rocha. “It just made sense to keep the brothers together and be part of the same family at Golden Boy. I have witnessed first-hand Golden Boy’s ability to nurture fighters and shape them into champions and am confident that this was right decision for Alexis.” Photo credits: @goldenboyboxing