ORANGE, Calif. – Super bantamweight Danny Roman (17-2-1, 5 KOs) continued his winning ways Friday night at “Path to Glory,” this time successfully defending his NABA Championship against the technically sound Erick Ruiz (14-4, 6 KOs) of Oxnard, Calif. With the unanimous decision win, Roman, 25, now sits with a nine fight-winning streak, plus the No. 15 ranking by the World Boxing Association.

“I’m feeling more and more confident with every win,” said Roman, who is based in Los Angeles. “Ruiz presented a tough challenge in that he’s defensive and likes to counter punch. I figured him out pretty quickly and was able to control the pace of the fight to get the win and keep my NABA title.”

Roman got off to a quick start, busting Ruiz’s nose early in the first round. By the second and third rounds, Roman backed up Ruiz with a steady jab and lightening fast left uppercut. From that point forward, Roman was essentially in the driver’s seat, navigating his way to the first title defense win of his young career. Unanimous decision scores read 98-92 and 99-91 twice.

Ortiz, who is listed at junior welterweight but could very easily fight at welterweight, possessed quick hands and a powerful right hand. The 23-year-old Santillan, off since February, showed no evidence of ring rust and was able to mix precise uppercuts with crushing body shots throughout the 8-round fight.

It was a battle of differing styles as Ortiz preferred to strike from distance with his right hand, while Santillan was most effective in close quarters. In the seventh round, the fight might as well have taken place in an elevator because both fighters were content to let the leather fly. Ultimately, Santillan showed more offensive and defensive consistency, and came away with perhaps the toughest win of his career. Scores read 76-76, 78-74, and 80-72.

“I think this is exactly the type of fight that I needed,” Santillan said. “Ortiz is a great competitor and the only way to get better is to be in tough fights.”

Up-and-coming featherweight Jose Haro (11-1, 6 KOs) of Salt Lake City delivered an impressive performance against the quick hitting Juan Reyes (12-3-3, 2 KOs) of Riverside, Calif. In the third round, Haro landed a sweeping right hand that was heard throughout the arena. Haro showed tremendous technical ability, while also displaying a stingy defense that was good enough for a unanimous decision win 79-73 all around.

Featherweight Erick Ituarte (12-1-1, 2 KOs) of Santa Ana, Calif. and Angel Martinez (6-2-1, 2 KOs) of Laredo, Tex. put on an exciting slugfest over six rounds. Ituarte was aggressive early and preferred to take the action to Martinez. While Ituarte relied on combinations, Martinez favored a counter left hook.

Toward the end of the fifth round, Ituarte connected with a powerful combination that floored the less experienced Martinez. He would beat the count, but by then, Ituarte had wrapped up the win. The scores read 59-54 and 60-53 in favor of Ituarte.

Lightweight Cesar Villarraga (8-1, 4 KOs) of Colombia suffered his first defeat at the hands of the Joel Diaz-trained Manuel Mendez (6-1-1, 3 KOs) of Indio, Calif. Villarraga appeared to be in control of the fight until the closing minute of the third round when he got caught with a straight right.

On the way down, Villarraga rolled his right ankle and could not beat the count. Mendez collected his third knockout win of his career (2:25 mark). It was a tough loss for Villarraga, as he was ahead on all three scorecards before he went down.

Kicking off the “Path to Glory” card were heavyweights Dakota Walker (1-0) of Los Angeles and Edgar Najera (0-5) of Tijuana, Mex. Walker, making his professional debut, worked a steady jab to keep Najera off balance. Even though winless through five fights, Najera displayed a steady defense that made it difficult for Walker to punch through. Nevertheless, Walker dominated the fight and won via unanimous decision 40-36 all around.
“Path to Glory” was presented by Thompson Boxing Promotions and sponsored by Lucas Oil, in association with LATV Networks. 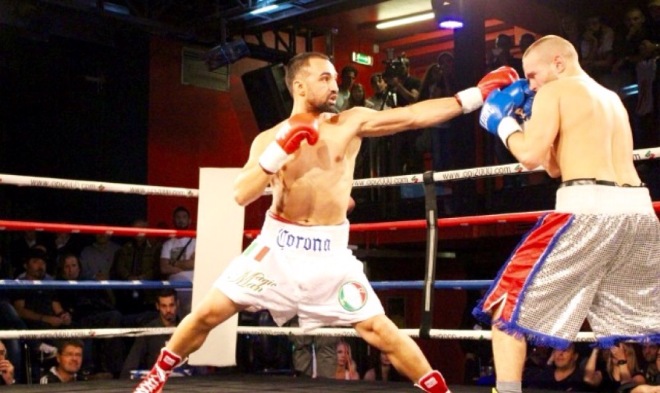 Post fight quotes: @paulmalignaggiJust wanted to let all my fans know we got the win tonight in Milan, Unanimous Decision. Felt good to get the hand raised for the 34th time. Above all, truly an honor to fight on Italian soil, and the love from the crowd was unreal. 🇮🇹🇮🇹🇮🇹 Really needed discipline to prep for this fight & it felt great to get the win. Thanks to #TeamMalignaggi and all my fans for the support!! Now it’s back to the states tomorrow. Straight to Vegas to work #PBConFS1 Tuesday night lol. Wouldn’t have it any other way!!

2012 Olympic middleweight silver medalist Esquiva Falcao moved to 11-0 with 7 KOs after a second round KO over Zoltan Papp (7-2-1, 3 KOs). In a battle of southpaws, Falcao bloodied Papp’s nose near the end of round one. In round two, Falcao connected with a left/right and an exhausted Papp went down against ropes. The fight was halted at 1:50.
@soulfighter @esquivafalcao @trboxing

FOR THE VACANT WBC WORLD SUPER

LIGHTWEIGHT CHAMPIONSHIP ON SATURDAY, OCTOBER 3 FROM @STUBHUB CENTER AND

LIVE ON @HBOBOXING AFTER DARK

On October 3, one the most exciting fighters and fearsome punchers in boxing,

BIRMINGHAM, AL – Heavyweight world champion Deontay “The Bronze Bomber” Wilder (35-0, 34 KOs)scored another impressive victory ofhis exciting and undefeated career tonight with a hard-fought 11th round TKO over Johann “Reptile” Duhaupas (32-3, 20 KOs) in primetime on Premier Boxing Champions (PBC) on NBC. Wilder’s win, which came at 55 seconds in the round, was registered in front of 8,471 raucous Alabama fans at Legacy Arena in Birmingham, Alabama.
Wilder was in a tough fight against the durable Duhaupas, who tested the strength and stamina of the highly touted American heavyweight. Wilder controlled the pace of much of the early rounds but had to weather the toughness of his opponent who refused to back away from Wilder’s punches. However, in the later rounds of the contest, Wilder listened to his corner and unleashed a series of combinations, including body shots, uppercuts and right hands to overwhelm his opponent and force Ref. Jack Reiss to stop the contest.

Wilder competed in the first heavyweight title bout in primetime on NBC since May 20, 1985, when then-undefeated American heavyweight world champion Larry Holmes, defended his title against Carl Williams in Reno, Nevada.

Polish warrior Andrzej Wawrzyk on the rise tonight in the ring against Mike Shepperd It is just a comfortable environment for the hard hitting Wawrzyk Who wants to make the fight a sealed memory of the stoppage as he has his eyes right on @bronzebomber fight, Punching and climbing the division is the current set direction.

COMES TO PRIMETIME NBC AS HE FACES FRENCHMAN JOHANN DUHAUPAS AS PREMIER BOXING CHAMPIONS COMES TO
@LEGACYARENA IN BIRMINGHAM, ALABAMA

FOR THE VACANT WBC WORLD SUPER

LIGHTWEIGHT CHAMPIONSHIP ON SATURDAY, OCTOBER 3 FROM @STUBHUB CENTER AND

LIVE ON @HBOBOXING AFTER DARK

On October 3, one the most exciting fighters and fearsome punchers in boxing,

Hamburg, September 25 2015. Due to a tendon tear in the left calf of the IBF/IBO and “The Ring Magazine” World Heavyweight Champion and WBA/WBO Superchampion Wladimir Klitschko, his championship fight against Tyson Fury will be postponed. After sustaining the injury in his training session yesterday, Wladimir Klitschko promptly left his training camp to seek medical treatment from Dr. Hans-Wilhelm Müller-Wohlfahrt, phsyician for the German national soccer team, who has diagnosed the injury.

“Especially after the exciting press conference last Wednesday, I was looking forward to this fight very much. I know that a lot of fans have already organized their trips to support me in Düsseldorf. I am so sorry that I am not able to fight on October 24. I also apologize to my opponent, who has spent many weeks preparing for this fight. I will do my very best to recover as fast as possible,” said Wladimir Klitschko.

Klitschko will continue to seek medical treatment from Dr. Müller-Wohlfahrt and the new date for the fight against Tyson Fury will be announced next week. The ESPRIT arena in Düsseldorf will still be the venue.

“The clinical and MRI-examination showed a partial musculotendinous tear of the left calf. The boxing fight planned for October 24 (World Championship in the heavyweight division) should be postponed for an indefinite period of time. Due to this injury we strictly recommend ceasing athletic activity in the next weeks,” said Dr. Müller-Wohlfahrt.

“Unfortunately, these situations are always possible in individual sports. We all know about the importance of this event for everyone involved, as well as for all boxing fans. Therefore, we are trying everything possible to postpone this fight to a nearby date at the ESPRIT arena in Düsseldorf,” said Bernd Bönte, CEO of Klitschko Management Group.

YANDEL AND TIDAL ANNOUNCE A HISTORIC EVENT IN PUERTO RICO

FROM THE MANDALAY BAY EVENTS CENTER IN LAS VEGAS

streaming entertainment company, to produce its first-ever streamed concert from the

Upon signing with Roc Nation Sports, Miguel Cotto agreed to assist Roc Nation in the

promotion and production of concerts in Puerto Rico. This venture marks the first such

collaboration on a musical project in conjunction with TIDAL, the newly launched

definition music videos and expertly curated editorial. Yandel will be the first Hispanic

artist of any genre to live stream a concert on TIDAL.com.

Yandel, who releases his third solo album under the Sony label on November 6 titled

“Dangerous,” kicks off his concert tour in the United States and Latin America in late

Center on December 12, 2015 which will be streamed live on TIDAL.com.

It was also announced today that the November 21 mega-fight between Cotto (40-4, 33

Yandel. The performance will be part of the fight’s telecast which will be produced

On the announcement of the new venture Cotto said: “This is a great day for me and

in Puerto Rico with an amazing talent and a good friend, Yandel. I thank everyone for

their support and for taking the time to be with us on this special day.”

“I am really excited and thankful for opportunity to work with Cotto Promotions,

TIDAL and Roc Nation,” said Yandel. “It is an honor to become the first artist to

represent not only my country, but also my music in an event of this magnitude with

major sports and entertainment figures that I truly admire. This is without a doubt a

experiences with the quality that my audience deserves. ”

Additional details regarding the event will be announced at a later date.

About Cotto vs. Canelo

Cotto vs. Canelo, a 12-round fight for Cotto’s WBC and Ring Magazine Middleweight

The event will be produced and distributed live by HBO Pay-Per-View beginning at 9:00

LATINBOXSPORTS.COM
Start a Blog at WordPress.com.