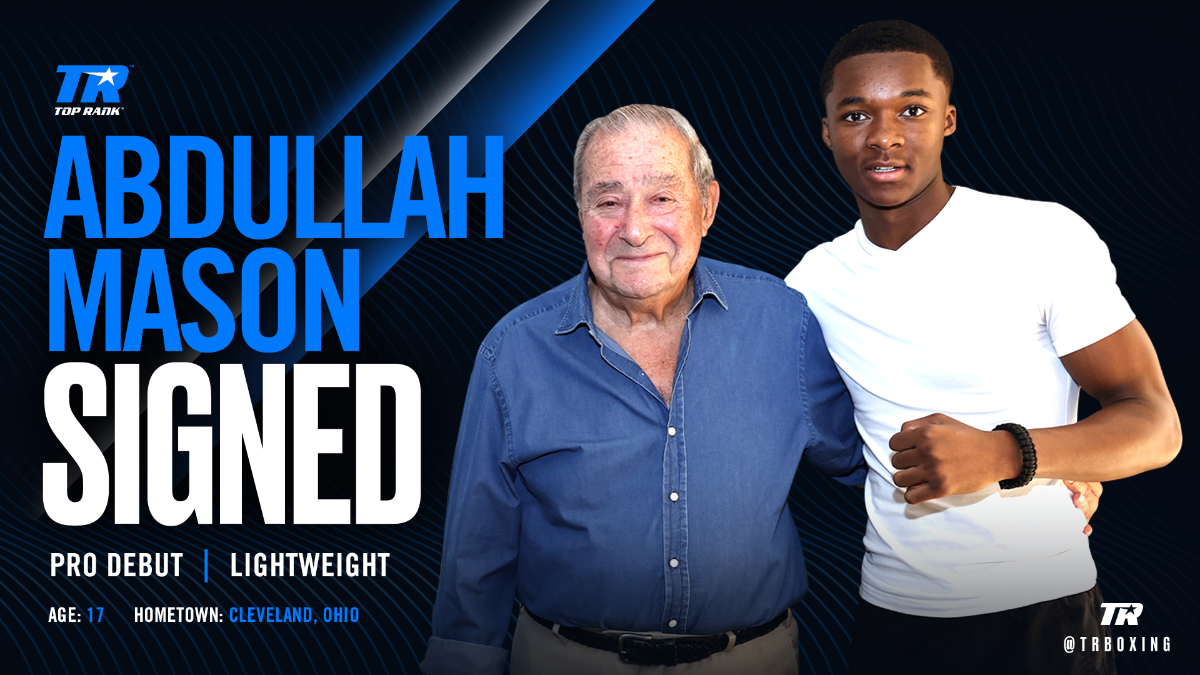 LAS VEGAS — Cleveland native Abdullah Mason is ready to conquer the boxing world. The lightweight prodigy, who many insiders tabbed as the brightest talent in the American amateur system, is not wasting time. At 17 years old, Mason, part of The Mason Brothers family of fighters, signed a professional contract with Top Rank and will turn pro in a four-rounder Friday, Nov. 5 on the Mikaela Mayer-Maiva Hamadouche undercard at The Theater at Virgin Hotels Las Vegas (LIVE on ESPN+).

Mason, who is managed by James Prince and co-promoted by Antonio Leonard Promotions, won the National Junior Olympics in 2017, the Eastern Regional Open in 2017 and 2018, and the Junior Open in 2018 and 2019. In April, he won a USA Boxing Youth National title, cementing his status as one of the country’s fighting crown jewels. He concluded his amateur career with roughly 65 wins in 80 fights.

“Abdullah Mason is one of the most electrifying young fighters I’ve ever seen, a 17-year-old who is ready to be a sensational professional,” said Top Rank chairman Bob Arum. “He’s held his own in sparring against the best pros in the world, and everybody I’ve spoken to raves about his talent and work ethic. It takes a special type of kid to turn pro this young, and I have no doubt he’ll live up to the billing.”

Mason said, “I want to thank Bob Arum, Top Rank, James Prince, Antonio Leonard, and my family for this incredible honor. My father and I believed it was the right time to take the next step.”

Mason, who recently relocated to Las Vegas with his family, has sparred the likes of Devin Haney, Shakur Stevenson, and Darwin Price. Trained by his father, Valiant Mason, he has four brothers, all of whom are boxers: Amir, 24, Adel, 22, Abdurrahman, 19, and Ibrahim, 15.

“My family is one big team. It keeps us on track,” Abdullah Mason said. “We’re always in the gym. We all have fun with it, but we push each other to the limit.

“Vegas is the boxing capital, so we wanted to come here and follow in the footsteps of all the world champions before us. We came here to train with the best fighters in the world. Being in an environment like this breeds champions. And with the team I have behind me, I know I will be a world champion one day.”