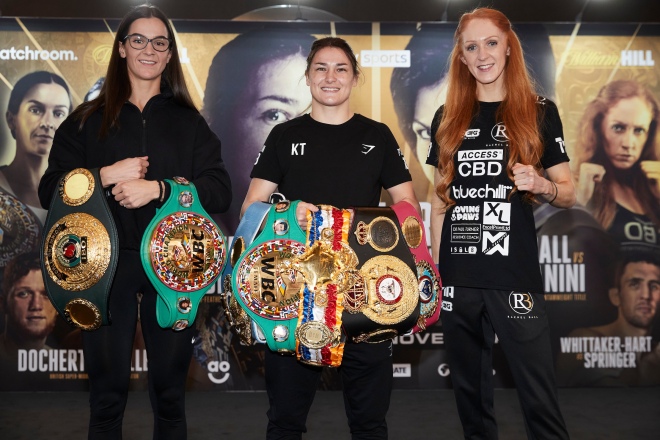 “It’s great to be back inside the bubble. It is unquestionably the best bubble in boxing. It is definitely the most expensive bubble in boxing! We do it properly. It is great to see all of the fighters here looking fit, well and healthy ahead of a huge night of boxing on Saturday back at Wembley Arena. A World Championship triple-header and a great opportunity for women’s boxing to carry on progressing. We’re live on Sky Sports in the UK and live across America on DAZN as well. The beauty of this card is although we have three women’s World Title fights, we also have three really good men’s fights. Domestic fights, young talent coming through, a big Super-Middleweight clash too.”

“I never get sick of looking at all the belts – it’s something I’ve worked extremely hard for. The journey has definitely been more exciting that I could have expected.

“One punch can change a fight in professional boxing. She is an unbeaten fighter and better than people expect.

“Hopefully I will do a bit of everything – outbox her and outfight her. There are no easy fights at this stage. This is a huge opportunity for her.

“Complacency is very, very dangerous. I’m ready for whatever comes my way. People haven’t seen the best of me.

“Every belt is on the line. She has a lot to fight for. But this is the position I’ve always wanted to be in, defending my titles. I’m prepared to walk away the Undisputed Champion.

“It’s a privilege to be headlining such a big show, an historic show. I never thought when I turned pro that we would see three women’s World Title fights on a show.

“I want to make history and create legacy and, to do that, you have to be active and take risks. We’re in this sport to inspire the next generation. It’s incredible to me that female fighters are household names now.”

“Of course I am really focused, that’s not to say I don’t admire her, I have followed her career both in the amateur ranks and now in the professionals. We’ve been working really hard for this so I am totally focused.

“It’s a lovely situation to be in and it’s a big opportunity for me. I have been working really hard for it so hopefully I can take advantage of this.”

“I’m still as hungry as ever. This is only the beginning for me. I want to get out there and fight the other champions, the best in my division.

“I’ve seen a few people on social media saying I can’t box! I’m not doing badly for someone who can’t box. A mistake we’ve made in the past was to look past the fight that was coming up towards future plans.

“The fight I had with Natasha Jonas? I learned a lot. That fight was a blessing in disguise which brought me back to reality, slowed me down, made me realised that I needed to make changes and improvements.

“Thanderz will throw the kitchen sink at me but I have to make sure that I stay champion. She’s very good at coming forwards, very game. I need to use my long arms and not get dragged into a scrap like I did [against Jonas].”

“It’s great to be here and it is a great opportunity. I’ve been waiting a long time for this, I’m really excited. It’s an amazing thing to see how female boxing is growing. It’s always good to have great examples like the current fighters we have to look up to. Of course in Norway for many years we had Cecilia Brækhus. She did a lot for boxing in Norway and Scandinavia. It’s great to be part of this.

“To become WBC World Champion on Saturday would mean everything. It is what I have been working towards for years. I really enjoy training, that’s what I enjoy the most. For me it isn’t hard work, I really enjoy it. It would mean a lot.”

“Every time I hear people say it, it gets more and more real. It’s still crazy and I’m just so grateful to be here. I’ve taken this opportunity with both hands. I’ve done everything that I can. I’m not going to leave anything in there on Saturday.

“It’s a fantastic time to be a part of women’s boxing – there’s loads of great girls coming through, now it’s time to live up to the expectations, to step up and deliver. Expect an all action fight from me every time. Expect fireworks, I’m definitely going to deliver them.

“I’ve got a 10-round fight ahead of me so I won’t be daft in the first few rounds but I’m not scared of tearing it up. I’m a very resilient person so I don’t think the pressure affected me [in my last fight]. This time, I’m more prepared.

“People will remember these kinds of shows forever. Katie and Terri will go down in history and hopefully I will too. People will look back and say: ‘That set a precedent like Jane Couch back in the day’. What she did for women’s boxing, hopefully we will too.”

“First and foremost thank you for the compliment on my new haircut! This is an incredible opportunity for me and it’s an opportunity that I’m really looking forward to. I’m really grateful for this. It’s true that I am pretty small. I have been smaller than all of my opponents I have faced. I have probably never faced someone as tall as Rachel but I am up for fighting whatever opponent that is put in front of me.”

“I’m not taking it personally, I think it’s a load of shit to be honest with you. What he’s got to realise is I’m not a Middleweight anymore, I’m a Super-Middle and I’m a big Super-Middle. I’m coming to win. Obviously you’ve given me another chance, Matchroom have given me another chance and I’m here to prove a point. In beating John Docherty I will prove my point. I’m going to show how good I really am. He’s fought journeymen. He’s not fought anyone decent yet. He’s going to see on fight night how good I am.”

“Fingers crossed everything goes well and you’ll see me in the ring on Saturday nightputting on a good performance. Friday night was a long night for me. I brushed myself down and went back to the gym on Sunday morning and carried on. I’ve got to thank everyone for getting me on this bill. Every fight is hard and I’m expecting a tough challenge against Angel. He’s going to be there all night and he’s going to bring the best out in me. I expect myself to be the winner.”

“You can expect a good fight from me. I have to say thank you very much for brining me to this city to fight. I have had some good fights and I’ve had four fights at championship level so I’m used to going the distance and I expect to win this fight.”

“I’m made up to have someone that’s coming to win against me. I feel like you’ll get more out of me if you’ve got someone in front of me who’s ready to push me. I’m excited to show what I can do. I know Jermaine is going to come to win and it’s going to be exciting. It’s not about the pressure, I don’t really think too much into that. I’ve been doing this since I was a young boy so I’m just taking things in my stride and going with it.”

“There’s no pressure on me. I’m coming here to fight. I rate Tom, he’s a good fighter. I’m going to bring the fire. I’m here to spoil the party. I can’t leave the ring disappointed or having regrets. I need to give it everything that I’ve got. I’ve got to put the pressure on and turn it into a real fight. I’ve fought unbeaten fighters before and I’ve gone there to win. This will be the first time that he’s thought someone with my mindset.”