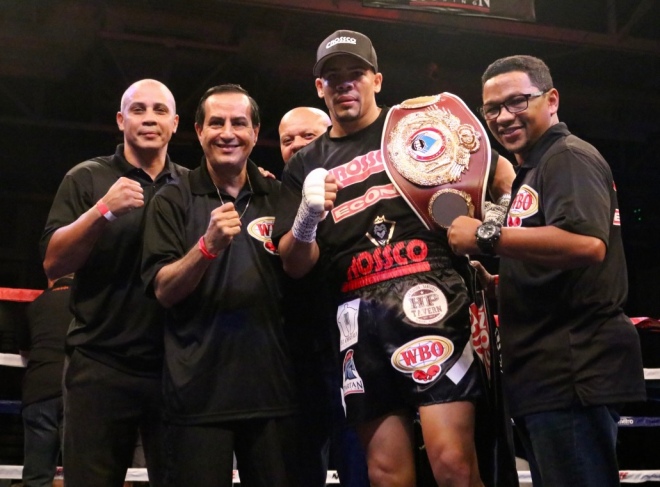 Puerto Rico – Trujillo Jean Carlos “Lobo” Torres scored his seventh knockout online after finishing with Carlos Portillo from Paraguay in the first round of the stellar fight in the most recent edition of “A Clean Fist”, which took place at the Colosseum Rubén Zayas Montañez in a presentation of PR Best Boxing Promotions in association with Spartan Boxing.

In this way, Lobo Torres (18-0, 14 kos), sixth ranked of the WBO at 140 pounds, defended for the third time his Latin title of that entity.
The action began with an aggressive Portillo (22-3, 17 kos) releasing his hands and reaching the face of the Puerto Rican, who also connected the South American. At one point Portillo surprised Torres with a blow that led the premises to try to grab, but seconds later Torres, who had hurt Portillo with fists to the head, connected an upper in the center of the stomach sending him to the canvas by the account. The brawl ended at 2:43 of the initial round.
“I was surprised by the fight plan he brought. I expected him to come boxing, but it wasn’t like that and it came to me with good hands,” Torres said after the brief fight. “We were able to make the adjustments and that hand came (the upper end).”
The coestelar meeting of the evening also concluded in the first round when the vegalteño Nicklaus Flaz (8-1, 6 kos) sent to the canvas the Mexican Darío Fermán (18-7, 15 kos) with a strong left, of which the Aztec did not recover. The final time was: 51 seconds.
Meanwhile, Arecibeño Néstor Bravo (18-0, 13 kos) knocked out Colombian Rodolfo Puente (18-4-2, 14 kos) in the second round. Bravo sent Puente twice on the canvas in the first round and once in the second when the referee stopped the action. The final time was 1:06.
The first match of the night ended with a technical knockout in favor of Arecibeño Christian Barreto (4-0, 4 kos), who dominated Jorge Santiago from the beginning (2-3, 1 kos) when he knocked him down once in the first round and two more in the third when the fight stopped. The final time was 2:22.

Wapa Deportes will broadcast this “A Clean Fist” shortly.