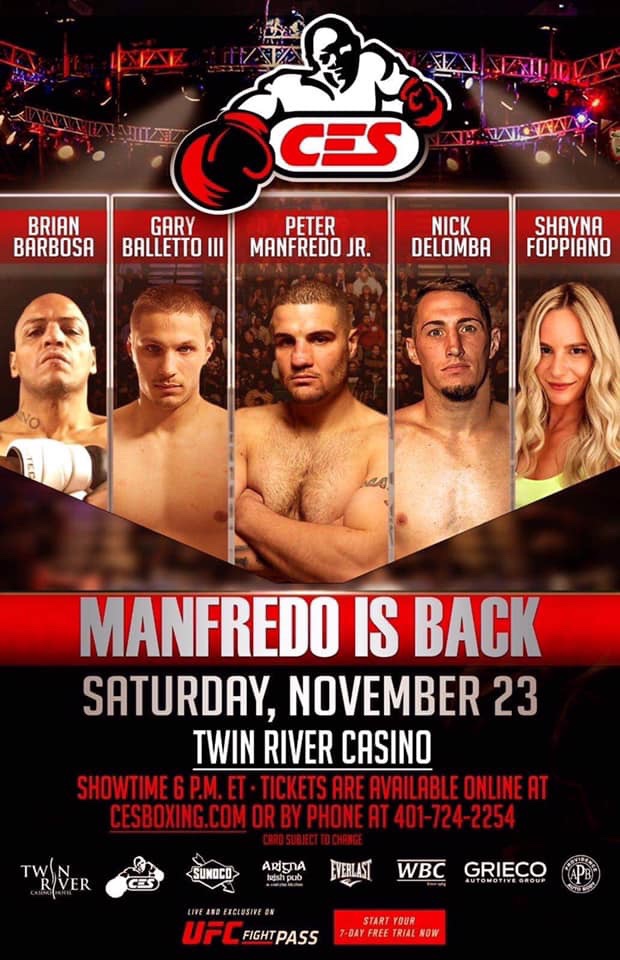 Tickets for the event start at $49 and are available online at http://www.cesboxing.com, and http://www.showclix.com or by phone at 401-724-2253. Doors open at 5 p.m. ET with the first preliminary bout beginning at 6. The UFC FIGHT PASS® stream begins at 8 p.m. ET with CES Boxing publicist and matchmaker Michael Parente handling play-by-play and commentary. UFC FIGHT PASS® subscriptions are available at http://www.ufcfightpass.com.

The buzz is beginning to reach its fever pitch as Manfredo Jr., born and raised in the Federal Hill neighborhood of Providence, returns to the Ocean State, where he’s fought 22 times since making his professional debut at Rhode Island’s historic Rhodes-on-the-Pawtuxet in 2000. Manfredo Jr. also helped launch Twin River’s Event Center in 2007, knocking out veteran Ted Muller in the main event of the casino’s first live combat sports event.

Nineteen years and more than 100 shows later, Twin River is once again home to “The Pride of Providence,” who hopes to improve upon his unbeaten record of 7-0-1 at the venue. One of Rhode Island’s most accomplished fighters in this, or any, era, Manfredo Jr. is a former IBO world middleweight champion and former three-time world title challenger who rose to fame on Season 1 of The Contender reality television series. He became a household name on the show following his win over Alfonso Gomez in 2005 and later went toe-to-toe twice with Sergio Mora and challenged Joe Calzaghe and Julio Cesar Chavez Jr. for world titles.

Fighting just a stone’s throw from where he grew up in Federal Hill, Manfredo Jr. returned to the Ocean State in 2006 following his run on The Contender and dazzled fans at The Dunkin’ Donuts Center with knockout wins over regional standouts Scott Pemberton and Joey Spina, arguably the most dominant stretch of his career. In 2012, he returned to Twin River with an impressive win over veteran Rayco Saunders and then honored lifetime friend and fellow Rhode Island legend Gary Balletto a year later with a knockout win over in-state rival Rich Gingras, wearing Balletto’s trunks to the ring just four months after Balletto was paralyzed in an accident at his home.

The legend continues November 23 as Manfredo Jr. returns to write the next chapter in his storied career, his first bout since May of 2016 when he and “Mr. Providence” Vladine Biosse fought to a draw in the highly-publicized “Battle for the Capital” at Twin River.

“This is going to be a night to remember,” said CES Boxing president Jimmy Burchfield Sr., who helped launch Manfredo Jr.’s pro career nearly two decades ago. “The Homecoming King is back! What could be better than the return of living legend Peter Manfredo Jr. on combat sports’ No. 1 streaming platform? The beautiful Twin River Casino Event Center is the place to be November 23. The crowd noise will be deafening and many of our sport’s young stars will get the opportunity to share the ring with a true legend — a fighter, father and husband who they look up to as a role model. You cannot miss this event!”

DeLomba returns to Twin River for the first time in more than a year and puts his four-fight win streak on the line against the dangerous Perez, who has won five of his last six, all by knockout. DeLomba last fought in Rhode Island in September of 2018, defeating Chris Singleton by unanimous decision, and most recently fought in July with a knockout win over Rynell Griffin in New Hampshire.

Valetin and Orta could steal the show November 23. The two have had their sights set on one another since Orta turned pro in 2018. Since then, Orta has racked up five wins in the past year while Valentin also boasts an undefeated record at 6-0-1.

Reynoso is also facing his toughest test date. An officer at Bridgewater State Hospital in Massachusetts, Reynoso recently made quick work of Kenny Chery in August, winning by third round knockout for his fifth knockout victory in as many fights. Zapata, a veteran of 13 fights, has never been stopped and has scored upset wins on the road against Philadelphia’s Isaiah Wise and Fred Jenkins Jr. and Reading, PA, vet Nicolas Hernandez.

The preliminary card features an eclectic mix of veterans and newcomers, starting with Brian Barbosa (31-7, 23 KOs) of Providence making his long-awaited return and the professional boxing debut of Gary Balletto III, the son of the iconic “Tiger” Balletto, who amassed a pro record of 31-3-2. Cranston’s Balletto is transitioning from the cage to the ring, boxing professionally for the first time following seven professional MMA fights with CES MMA between 2015 and 2018.

Barbosa is back for the first time since 2013. “The Bull” ran off an impressive streak of 11 consecutive knockouts between 1994 and 1997 as one of the region’s top fighters and also returned from an eight-year layoff in 2011 with a knockout win over Rhode Island rival Joe Gardner. A former USBA and NABO middleweight champion, Barbosa went on to face former super welterweight world champion Carl Daniels in an IBF title eliminator in 2000 and