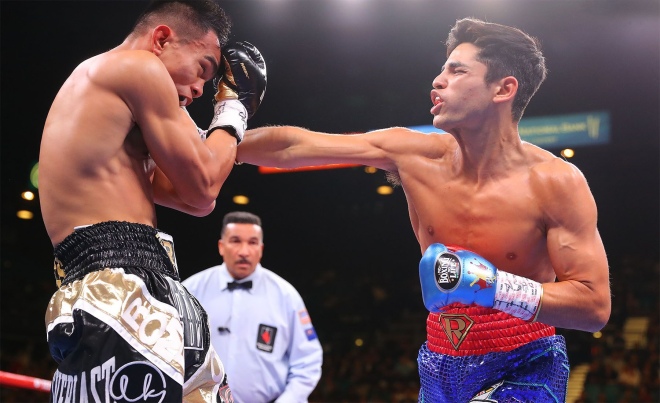 Las Vegas, NV – In the co-main event, Ryan Garcia (19-0, 16KOs) of Victorville, Calif. stopped “Ruthless” Romero Duno (21-2, 16 KOs) of Los Angeles, Calif.via knockout in the first round of a 12-round bout for the WBC Silver and NABO Lightweight Titles. Garcia won with a time of 1:38 of the aforementioned round. “I feel good,” said Ryan Garcia.”It’s kind of what I expected. All respect to Duno, he came to fight, he came in shape, he caught me with an overhand right and I took it and from there I knew I could keep taking them and keep coming at him. When I took his best shot, I knew alright, I got him. Everybody knows he has a big overhand right, he’s put a lot of people to sleep with that, and then when I took it, I thought – oh okay, that’s what it is. And I felt good from then.” “He came at me like a bull. I was like damn, oh shoot, I was trying to move out the way. I’m like, okay I’m going to start swinging. I’m going to let mine go then. I tried to fake with the overhand, jab right, bang bang, and it’s over – temple shot. Once you hit the temple, it’s almost over right there. There’s three places to knock somebody out, it’s right in the temple, behind the ear, and right in the chin. You hit anywhere with a solid punch and it’s over.” “I’m just learning my overall game, footwork, speed, power, I’m just soaking it in. With Canelo there, it’s an honor. It makes me feel good just watching him spar, watching him train. He tells me I’m gonna do good, and I feel good.” “I just want better competition, the more I step up. I’m only 21 and a lot of people forget that. But I’m going at my pace, whatever I feel I’m ready for, I’ll take on. Those fights down the line are huge fights, once my team feels I’m prepared. I’m always going to listen to my team.”