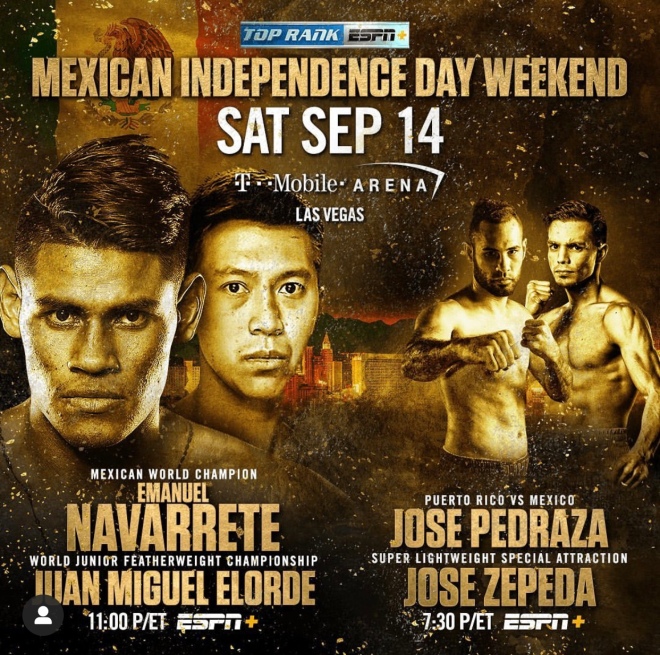 Fury-Wallin and Navarrete-Elorde will stream live and exclusively in the United States on ESPN+, the leading multi-sport streaming service, starting at 11 p.m. ET. The undercard, headlined by Pedraza-Zepeda, will stream on ESPN+ starting at 7:30 p.m. ET. ESPN+ is available via the ESPN App on mobile and connected devices, on ESPN.com and at ESPNplus.com.

“I am very excited and proud to be part of the big card in Las Vegas at T-Mobile Arena and to defend my title in front of my people on such a special date for my beloved Mexico,” Navarrete said. “We will represent the Mexican flag on the biggest stage in boxing.”

“When I was offered the opportunity to fight for the world title on such a momentous card, I didn’t hesitate,” Elorde said. “I’ve dreamed of becoming a world champion, and this is my chance. Trust me, I will bring my special brand of Pinoy Power to Las Vegas. The title will come home to the Philippines.”

Navarrete (28-1, 24 KOs) is wasting no time getting back to action, as he knocked out Francisco “Panchito” De Vaca in three rounds August 17 at Banc of California Stadium. One of boxing’s most active world champions, Navarrete shocked the boxing world last December in New York City with an upset decision win over Isaac “Royal Storm” Dogboe to win the title. Five months later, he repeated the feat, this time stopping Dogboe in the 12th round in Tucson, Arizona. The De Vaca victory was Navarrete’s 23rd in a row dating back to 2012, a four-round decision defeat in the final round of the Cinturón de Oro XVIII tournament.

Elorde (28-1, 15 KOs) has championship pedigree in his blood, as he is the grandson of the late Filipino boxing icon Gabriel “Flash” Elorde. He has won 18 bouts in a row since a four-round decision loss in November 2011, most recently scoring a 12-round unanimous decision over Japanese contender Shohei Kawashima to retain his WBO Asia Pacific belt. Elorde is attempting to become the first junior featherweight world champion from the Philippines since Nonito Donaire.

Pedraza (26-2, 13 KOs), from Cidra, Puerto Rico, has captured world titles at junior lightweight and lightweight and is beginning his quest to become the seventh male fighter from Puerto Rico to win world titles in three weight classes. His WBO lightweight title reign was brief, as he lost a competitive unanimous decision to Vasiliy Lomachenko last December in a highly anticipated unification bout. Pedraza rebounded in impressive fashion in May, knocking out the big-hitting Antonio Lozada Jr. in nine rounds.

Zepeda (30-2, 25 KOs), who lived in Guerrero Negro, Mexico, until the age of 10, is two fights removed from a majority decision defeat to Jose Ramirez for the WBC super lightweight world title. A southpaw who began boxing after moving to Southern California, Zepeda is seeking a third world title opportunity. In 2015, he challenged Terry Flanagan for the vacant WBO lightweight world title and was forced to retire on his stool with a separated shoulder following the second round.

“This fight will be a classic Mexico vs. Puerto Rico fight! I know that a big win will take me a step closer to capturing another world title. I want to become a champion in every weight class that I fight. After the fight, I will celebrate Mexican Independence Day with my Mexican brothers.”

“I feel like this fight will give me the opportunity to really showcase my skills and put me in a position to challenge for a world title,” Zepeda said. “I’m glad that it is versus a former world champion like Pedraza. I am excited that we will add another chapter to the great Mexico vs. Puerto Rico rivalry.”

In other action on the ESPN+ undercard stream:

Promoted by Top Rank, in association with Frank Warren’s Queensberry Promotions and Salita Promotions, tickets for Fury vs. Wallin priced at $606, $456, $306, $206 and $106 (not including applicable fees) are on sale now. Tickets are also available for purchase online at www.axs.com or by phone at 888-929-7849.

About ESPN+
ESPN+ is the multi-sport, direct-to-consumer video service from The Walt Disney Company’s Direct-to-Consumer and International (DTCI) segment and ESPN. It reached 2 million subscribers in less than a year and offers fans thousands of live events, on-demand content and original programming not available on ESPN’s linear TV or digital networks, along with premium editorial content.

ESPN+ is available as an integrated part of the ESPN App (on mobile and connected devices) and ESPN.com.