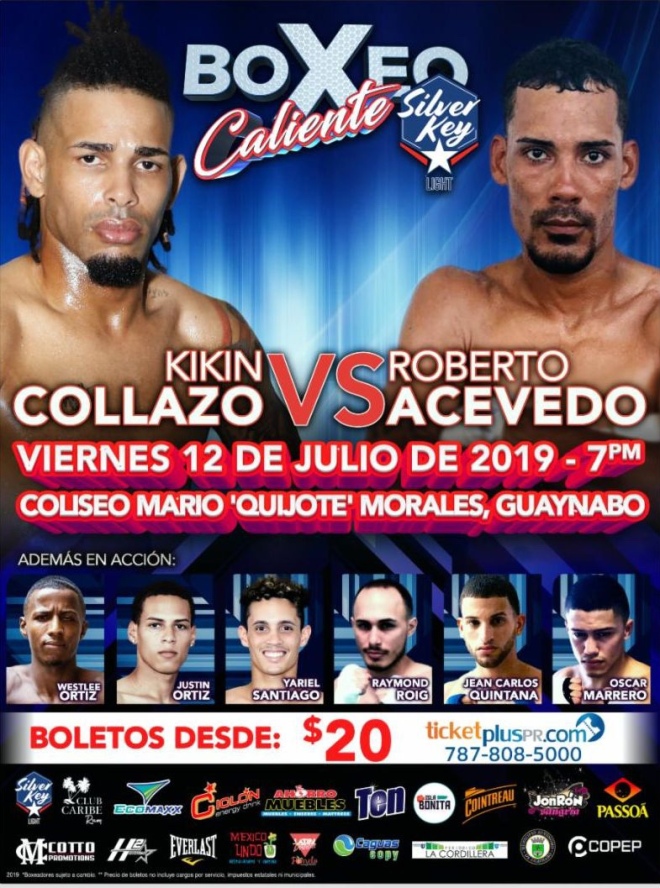 Puerto Rico – It ‘s been over 10 years since Enrique ‘Kikin’ Collazo and Roberto Acevedo were found in the same ring. For this heated encounter sucitó during his time as amateur boxers and professional careers they took different paths and next Friday 12 July its destinations are back in the ring of the successful series of Miguel Cotto Promotions and H2 Entertainment ‘Hot Boxing Silver Key ‘at the Coliseo Mario’ Quijote ‘Morales in the Municipality of Guaynabo.

‘That first fight remind you connected a upper and swelled his left eye right away, then did nothing if not repeat the same offense, I really do not know why the judges saw it so close , “said’ Kikin ‘Collazo who took the victory in that game.

Roberto Acevedo 8-3 5 KO’s inactive status but always to maintained in the gym and claims to be in good condition to make the most of the opportunity, “I’m ready for the fight, my training is the most we have done everything my coaches and Samuel Serrano Emilio Lozada asked me if he comes with good pants will put me very close to my spare me what he falters her heart, “he said very confident.

For super middleweight ‘Kikin’ who has a professional record of 13-1-1 with 10 KO’s an opportunity to stay active motivates “I am very content to be fighting nuevamete well have been active and understand that when we pass this test with Please God will open doors to bigger stages and to ranquiarme in the rankings, “said the protégé of former world champion ‘Tito’ Acosta.

‘Kikín’ Collazo and Roberto Acevedo be measured in a combat round agreed 8 an intermediate weight of 171 pounds. In other bouts also be Raymond G. Roig action (3-1) who measured Oscar Marrero (5-2, 3KOs) 6 round the division fly while in a clash of unbeaten; the featherweight Westlee Ortíz (2-0-1, 2Kos) and Joshua Maldonado (1-0) will battle in a fight to 6 assaults. They will also be in action Jean C. Cabral (2-0), Justin Ortiz (1-0) and making his pro debut will be Hector Nunez de San Juan, Juan C. Quintana de Cataño and Luis Valentin de Toa Alta.