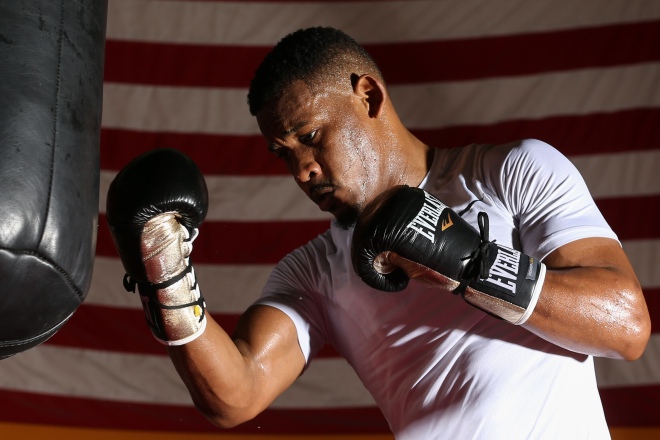 SATURDAY, MAY 4, 2019 AT T-MOBILE ARENA AND LIVE EXCLUSIVELY ON DAZN IN THE US AND ON SKY SPORTS IN THE UK 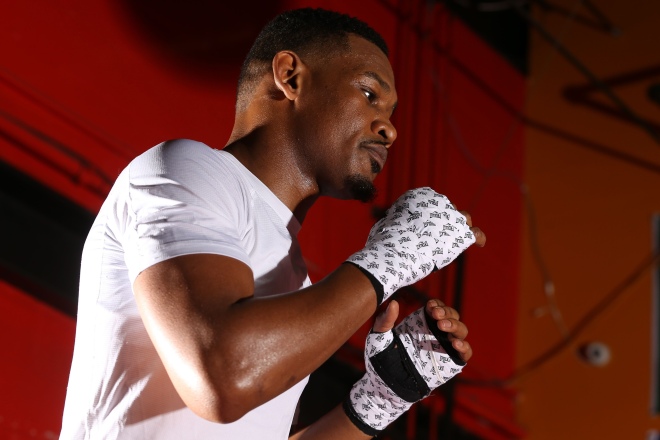 Jacobs (35-2, 29KOs) of Brooklyn, N.Y. hosted a media workout today at CEA Fitness in Long Island, N.Y. ahead of his 12-round unification fight against Canelo Alvarez (50-1-2, 34 KOs) of Guadalajara, Mexico. Andre Rozier, his trainer, also attended the workout. The event will take place Saturday, May 4 at T-Mobile Arena in Las Vegas and will be streamed live exclusively on DAZN.

Here is what today’s participants had to say at the workout:

“I don’t necessarily think Canelo can bully me. I think that it’s going to be really hard for him being the smaller guy to dictate that. I’m a rough guy when it comes to being in the ring. From the outside looking in, it might look different. But in the ring, I’m a physically big guy with speed and power, so it’s more about the tactics that I choose to use to be victorious.”

“All I see is my hand being raised. I’ve envisioned KOs, decisions, all the positive things. As far as controversy or negativity, him being able to take my punches or push me back, that’s not entered my mind. We only think positively before going into the ring, we’re ready for every possibility, but ultimately, we are on a positive path to victory.”

“Victory would truly show the fans that whether you think I beat Golovkin or not. I am the best Middleweight in the world. I’ve always said that I am the best, and I’ve also always been vocal that the win over Golovkin was taken from me. So, a win over Canelo puts a new idea in the fans’ minds that this guy is the best as he’s proven it against a guy that bean Golovkin – and then I can give Golovkin the rematch and prove that I am better than him.”

“I’ve switched up the sparring partners a lot and we’ve worked a lot on footwork. I’ve been the come-forward aggressor in my previous fights, the power-puncher; Canelo takes a good shot and he’s very elusive with his upper body, so we wanted to make sure we’re faster on our feet, with our hands and with our combinations than in previous fights.”

“I give Canelo all the respect in the world. He’s definitely top-ten, pound for pound. There are some controversial fights that he’s had that where I thought he lost, including both Golovkin fights. But I respect any man that has the courage to fight as this is a kill or be killed sport, but that’s where the respect ends. As far as getting in the ring with him goes, I want to be the victor. I want to take his head off and prove that I am the best gladiator in the world. That’s my true intentions so there’s no respect when it comes to that. But we’re both gentlemen and in my opinion, we’re great ambassadors for the sport. But take that away, and it’s going to be a blood sport in the ring.”

“It’s a little annoying to have to keep talking about the judges and Canelo getting favoritism, but it’s also a fact in most people’s mind so that’s why it comes up so much. I don’t mind answering the questions, but it can be annoying as I don’t want the mindset to be going in there to fight Canelo and the judges. I don’t need any more stress in this fight as Canelo is a force in himself and it’s going to take a lot to figure him out.”

“I study all the fights, and the ones I believed he lost as those are the fighters that showed his bad habits and the opponents were able to exploit them. Canelo has great upper body and head movement, but his legs and his knees don’t hold up well. He doesn’t cut the ring off well like Sergey Derevyanchenko or Golovkin. We look at things like that. I’m one of the longest fighters that he’s faced too, and I’m so fast, so I think I can use all that to my advantage.”

“Sometimes in boxing you have to prove yourself. If you don’t have the name, the power and the brand to really be marketed to the world, you have to work harder to get recognition. I think that with the win over Canelo, I would be given everything I rightfully deserve. The pound-for-pound list doesn’t worry me as that’s for the fans. They can pick and choose who they see fit and who they like. That’s a favoritism thing anyway, so if I’m not the fans favorite after this fight, I’ve got a lot more work to do. I need to not worry about that but concentrate on winning the fight in the ring and the rest will come.”

“Controversy sells but that’s not who I am. That’s not where I came from. I’m not sure if that’s why I am not a household name, but I can’t concentrate on that. I stay true to who I am and how I was raised. I’ll always keep that integrity and try to be a stand-up guy. Also, by having a son, I know he watches everything that I do, and I can’t be acting up and being goofy to get more ratings. Boxing is my job, I have to stay professional and disciplined to get the job done.”

“I never look past any fighter, but it’s absurd that Golovkin and his team would always say that people are fearful of facing them and that they were in it for the love of the sport and to fight the best. Me getting the win over Canelo, you would think that they would want the rematch, but we heard it out of their own mouths that they still wouldn’t want the rematch if I win. They would rather fight Canelo. So, we see from that that boxing is a business. It’s a compliment for sure that he thinks that way. Golovkin knows he lost the fight against me. I saw it in his eyes when they gave me the decision, and he’s never been vocal about giving me the rematch. It’s either been small talk or just swept under the rug. So, for me, I just want to make sure that I not only fight Golovkin again and prove the naysayers wrong, but show him that he knows that I am better than he is.”

“I love energy. Regardless of the fans rooting for Canelo or booing me, I take it and use it as fuel. I want people to chant, roar, raise the roof, it doesn’t matter if it’s for me or against me, I just want that energy in the arena to feed off, and that’s what I am expecting on May 4.”

“I haven’t done anything majorly different than in any other training camp. We’ve had a lot of guys who spar similar to Canelo’s style, and I’ve kept my camp here in New York. We have everything we need here at Competitive Edge Athletics. I’ve been here for six years and this is the biggest fight I’ve ever had. I wanted to be at home and feel that energy from where it all started. I wanted feel the vibes and then go to Las Vegas for the victory.”

“We leave tomorrow, so I’m going to go to Brownsville before I go to get some love to take with me that I was raised from and go out and conquer the world. It’s Brooklyn versus everyone where I’m from. This is the opportunity and my one shot to achieve my dreams. It’s hard to explain the feeling you get of being from Brooklyn, so to go back and feel the love before I go to Vegas is important.”

“This is what we’ve groomed Danny for since he was 13 years old. Now is his time. It’s the biggest fight of his life and one of the biggest and best fights in boxing, and Danny will be the victor on May 4. This is not something that’s just fallen into Danny’s lap as a gift. This is many years of hard work and dedication and now his moment is here.”

“He’s my baby, my boy. Danny showed early that he was elite and special. When he was afflicted with cancer, we thought we were going to lose him. God put his hand on him, kept him with us, and he started coming to the gym. Then, he had this huge brace on and he’d walk down the steps one and a time and the kids would help him. He’d do a little bit of shadow boxing and then a bit on the bag, and every day he would improve until he became a world champion. That’s why I believe that he’s still improving and will unify the titles.”

“Canelo and Golden Boy have been completely professional and great to work with from day one – but now it’s fight time. I know that they are getting ready and we’re getting ready. Danny has never let me down and in Las Vegas he becomes unified middleweight champion of the world. We did the ten pounds to win the IBF title against Sergey, so it won’t be a problem, he’ll make it easily.”

Canelo vs. Jacobs is a 12-round fight for the WBC, WBA, Lineal, Ring Magazine and IBF Middleweight World Titles presented by Golden Boy in association with Matchroom Boxing. The event is sponsored by Tecate, “THE OFFICIAL BEER OF BOXING” and Hennessy “Never Stop. Never Settle.”The event will take place Saturday, May 4, 2019 at T-Mobile Arena in Las Vegas and will be streamed live exclusively on DAZN. 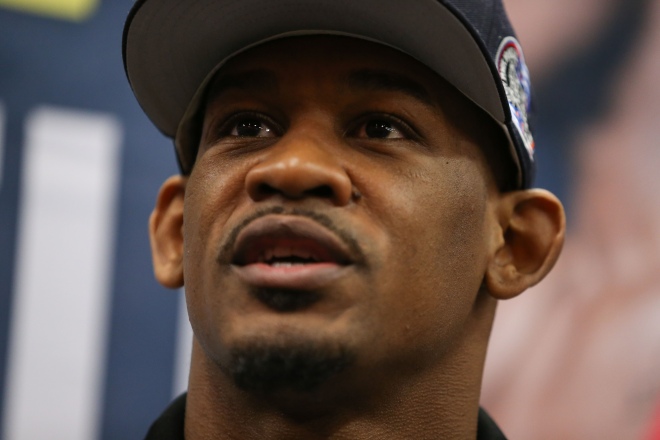 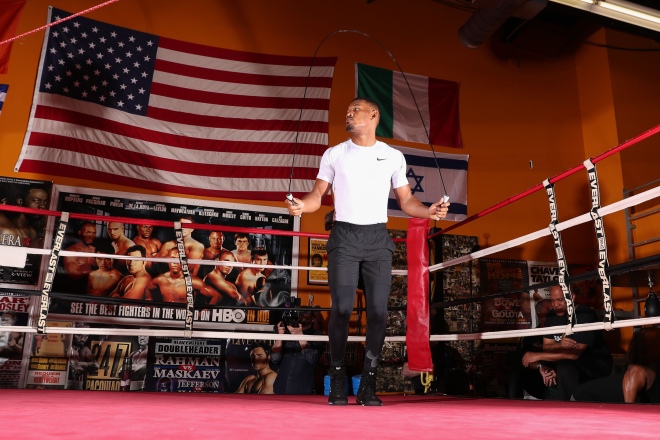 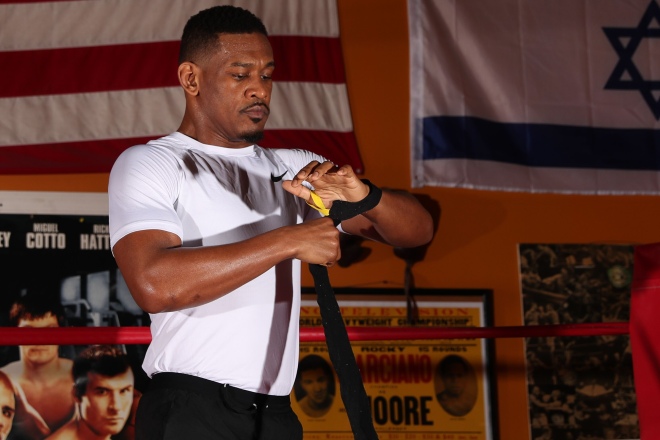 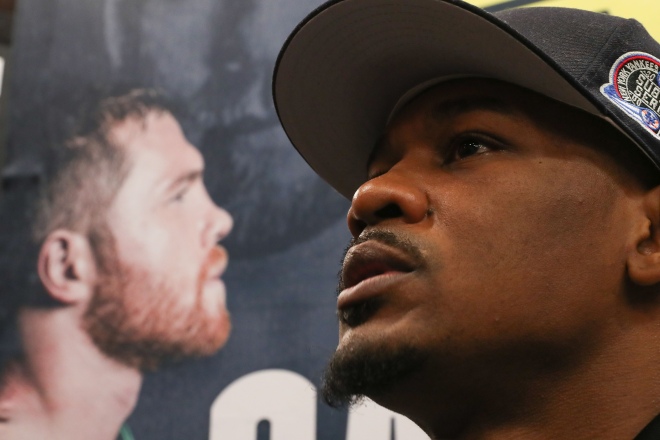