PHILADELPHIA – Oleksandr “The Nail” Gvozdyk nailed down the first defense of his WBC light heavyweight world title, knocking out Doudou Ngumbu in the fifth round.

Ngumbu (38-9, 14 KOs) injured his right calf and could not continue, forcing referee Eric Dali to stop the fight. 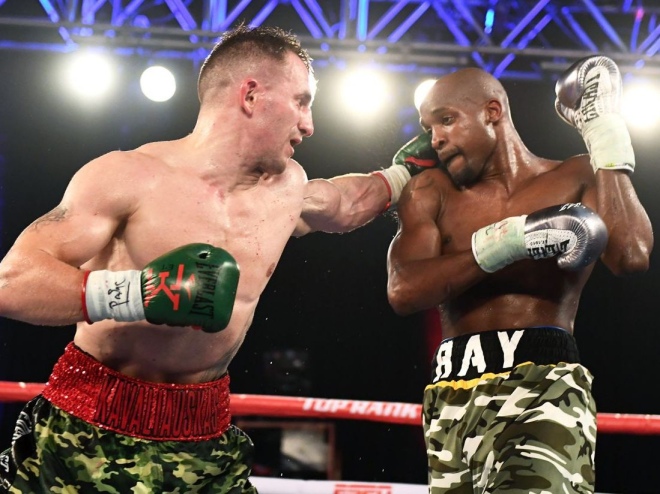 Mean Machine and Ray Robinson fight to a majority draw.

WBO No. 1 welterweight contender Egidijus “Mean Machine” Kavaliauskas maintained his unbeaten record — and kept himself in the running for a shot at champion Terence “Bud” Crawford — although it was not the outcome he wanted. A 10-round majority draw against the upset-minded Philadelphia native Ray Robinson left both fighters unsatisfied.

In the opening bout of the night at the 2300 Area in Philadelphia, PA. Welterweight Kudratillo “Punisher” Abdukakhorov (16-0, 9 KO’s) went the distance for twelve rounds in a IBF Elimination contest scoring a unanimous decision win over Japanese warrior Keita Obara (20-4-1, 18 KO’s) Judges Official scores were

Middleweight Humberto Gutierrez, meet the right hand of Christian Mbilli from Montreal, CA. goes to (14-0, 13 KO’s) scores a unanimous decision victory over Gutierrez who just couldn’t get anything done to move forward.

Super Featherweight Joshafat Ortíz (6-0, 4 KO’s) from Reading, PA. waisted no time jumping right on James Thomas (6-5, 6 KO’s) from Grand Rapids, MI. pounding him with hard shots in the opening round dropping Thomas with a overhand to the canvas, Ortíz seals the victory at the official time 2:53 seconds of round one by TKO victory.

Puerto Rico’s Super Lightweight Jose “Chino” Lopez (12-1, 10 KO’s) from Humacao, PR. with a high octane performance knocking off Askat Ualikhanov (4-2, 2 KO’s) from Oxnard, CA. he just couldn’t get it going in the fight getting hit with massive power shots as Lopez stepping it up harder in round five hitting Ualikhanov with a explosive right hand it was just a matter of time Ualikhanov corner advised referee Benji Esteves he could not continue ending the fight by seventh round TKO victory for Lopez.

It was all Adorno from the start with his young increasingly impressive style put his punches together looking very relaxed showing good speed and footwork giving Balthazar too many problems in the contest.

Super Featherweight Donald “No Love” Smith (9-0, 5 KO’s) from Philadelphia, PA. shoots a hard right hook to the body sending Martinez down to the canvas in round Smith could not capitalize by finishing off Jose Antonio Martinez (11-18, 6 KO’s) from Albuquerque, NM. But his ring patience paid off catches Martinez coming in with a straight left hand ending Martinez night at the official time 2:01 seconds of round four by KO victory.