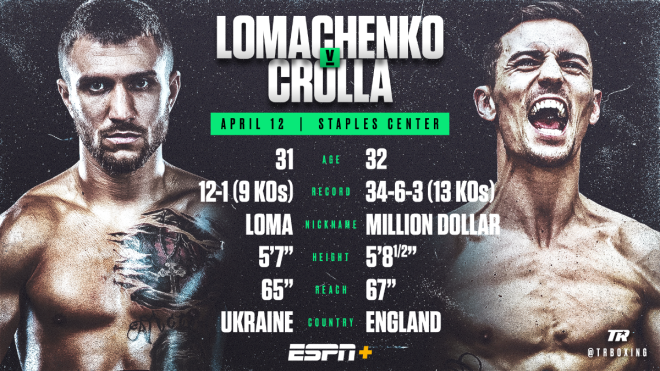 LOS ANGELES — After thrilling Big Apple audiences in his last three bouts, Vasiliy “Loma” Lomachenko is ready to bring his lightweight world titles to the City of Angels.

Lomachenko-Crolla and Ramirez’s fight will stream live and exclusively in the United States beginning at 11 p.m. ET/8 p.m. PT on ESPN+ — the direct-to-consumer subscription streaming service, which will mark its one-year anniversary since launching on the day of the fight. The entire undercard will also stream live on ESPN+ starting at 8 p.m. ET/5 p.m. PT.

“Staples Center is the perfect venue to showcase one of boxing’s great fighters, Vasiliy Lomachenko, who will test himself against a top contender in Anthony Crolla of Great Britain,” said Top Rank chairman Bob Arum.

“Los Angeles boxing fans are passionate and knowledgeable, and I look forward to putting on a spectacular show for them at Staples Center,” Lomachenko said. “Crolla is my mandatory challenger, and I like that he always comes to fight. He’s going to make the most of this opportunity.”

“I cannot wait for this. These are the fights you are in the sport for,” Crolla said. “People will say that I have got nothing to lose, but I am genuinely going over to LA to shock the world. I will concentrate on me. Firstly, I have to make sure the best Anthony Crolla turns up that night. I’m not worried about that. Preparing for Lomachenko is hard because he’s so unorthodox. He’s that good that when he does something wrong he gets away with it. You wouldn’t teach some of the things that he does. He’s so unique in that respect.”

“I’m delighted that Anthony gets another chance at a world title, this time against pound-for-pound star Vasiliy Lomachenko,” said Eddie Hearn, Managing Director of Matchroom Sport. “After losing his world title to Jorge Linares, Anthony has fought his way back into the mandatory position, and he is more than ready for the challenge. It’s been a fairytale story for him and now he gets another big chance on the big stage in a fight that means everything to him.”

Lomachenko (12-1, 9 KOs) entered the professional ranks following an amateur career that included a pair of Olympic gold medals for his native Ukraine and an unprecedented 396-1 record. He set a boxing record by winning world titles in three weight classes in 12 fights, shattering the previous mark of 20 set by Jeff Fenech 30 years prior. He was named 2017 Fighter of the Year by most boxing outlets after forcing all three of his opponents — Jason Sosa, Marriaga and fellow two-time Olympic gold medalist Guillermo Rigondeaux — to quit on their stools.

In May 2018, he moved up in weight and captured the WBA lightweight title when he rebounded from a torn labrum and a sixth-round knockdown to stop Jorge Linares at Madison Square Garden with a body shot in the 10th round. That December, in front of a sold-out Hulu Theater at Madison Square Garden crowd, he scored a pair of knockdowns and won a wide unanimous decision over WBO lightweight champion Jose “Sniper” Pedraza to unify titles.

Crolla (34-6-3, 13 KOs), from Manchester, England, turned pro in October 2006 and won the British lightweight title in 2011. He won the WBA lightweight title with a fifth-round knockout over Darleys Perez in November 2015, knocking Perez out for the count with a vicious left hook to the liver. Crolla defended the belt with an upset seventh-round knockout win against Ismael Barroso, scoring the finishing blow on a right hand to the body. He lost the title via competitive unanimous decision to Linares in September 2016, then lost the immediate rematch by unanimous decision the following March. Crolla earned another world title shot by authoring three consecutive decision wins, including a unanimous decision over former three-weight world champion Ricky Burns in October 2017.

Ramirez (39-0, 25 KOs) is ready to make his mark at light heavyweight after making five successful defenses of his WBO world title. The native of Mazatlán, Mexico, is a 10-year pro who won the world title in April 2016 with a shutout unanimous decision over two-weight world champion Arthur Abraham. In his last bout, Dec. 14 in Corpus Christi, Texas, he closed the show strong and defeated Jesse “Hollywood” Hart via majority decision. Ramirez, who has not ruled out returning to super middleweight to defend his title, also has his sights set on the light heavyweight division’s leading names.

“I am very motivated because of all the new things I have been doing to advance my career,” Ramirez said. “I am very excited to fight at Staples Center for the first time, as I consider Los Angeles my second home. I knew there will be many Latino fans supporting me. I want to become an idol of Mexican boxing, and nothing will stop me as I work to fulfill my dreams. I am also working with a new trainer, Julian Chua, who is pushing me to become the best fighter possible.”