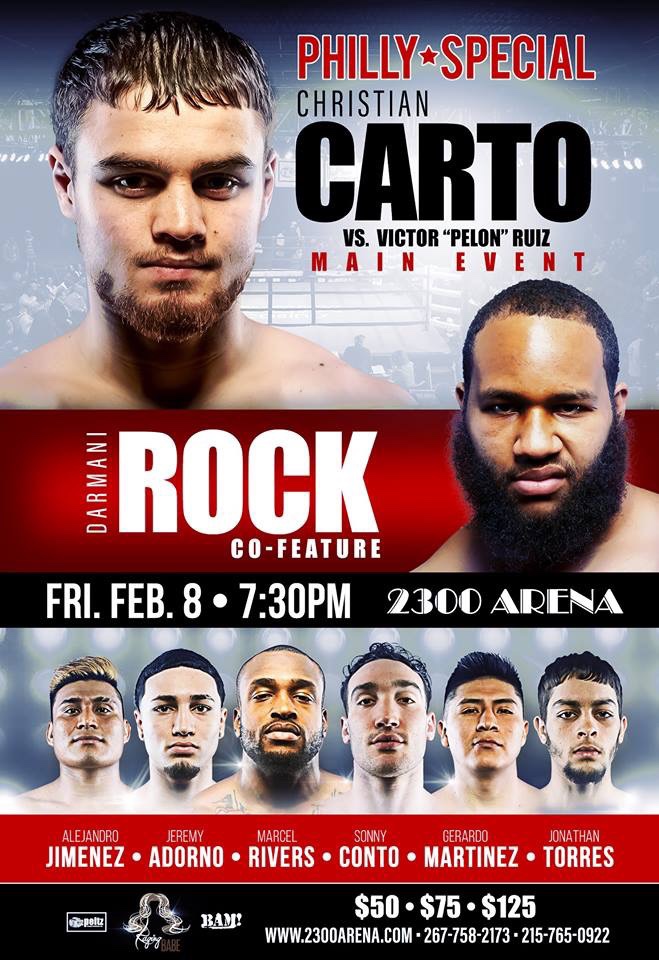 The Carto-Ruiz fight tops an eight-fight card, dubbed the “Philly Special” by promoter Michelle Rosado, of Raging Babe, in her first solo promotion in Philadelphia.

Carto, 22, has won all 17 of his pro fights, 11 by knockout.  A pro since mid-2016, Carto has developed into one of the most popular fighters in the Philadelphia/Atlantic City area. In his last fight

Ruiz, 27, comes into the fight the more experienced of the two. He turned pro in 2011 and has boxed some of the best “little men” in the world. In 2015, in Corpus Christi, TX, he got off the canvas in the second round and went on to win an eight-round split decision over former IBF world super flyweight champion Daiki Kameda, of Tokyo, Japan.

“I’m eager to test my skills against (Victor) Ruiz,” said Carto.   “We’ve watched tape and he’s got plenty of experience.  Ruiz has fought some great fighters: McWilliams Arroyo, Oscar Negrete and current WBO Bantamweight Champion Zolani Tete.  As for 2019, I’m ready to start the year strong and I’m happy to be back in South Philly at the 2300 Arena. Training camp is going great. Billy (trainer Briscoe) and I will leave no stone unturned and we’ll be ready for Ruiz.”