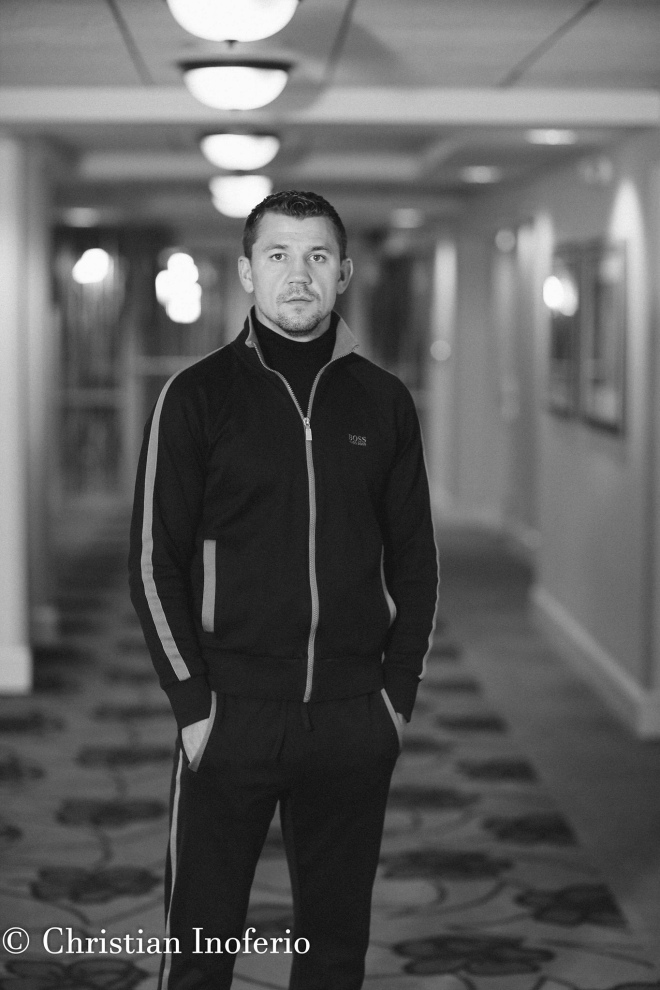 Live in Primetime on FOX & FOX Deportes
& Presented by Premier Boxing Champions on Saturday,
December 22 from Barclays Center in Brooklyn
Photo credits: Christian Inoferio
BROOKLYN – Middleweight contender Matt Korobovhas stepped up to challenge Jermall Charlo for the WBC Interim Middleweight Championship live in primetime on FOX and FOX Deportes on Saturday, December 22 from Barclays Center, the home of BROOKLYN BOXING™ in an event presented by Premier Boxing Champions.
Korobov is replacing Willie Monroe, Jr., who was removed from the main event after he tested positive for a banned substance by VADA under the WBC Clean Boxing Program. The WBC is conducting further investigation into the matter. Korobov was due to fight on the undercard and had been training to fight December 22. He willingly stepped forward when the call came for a replacement for Monroe.
“I was well prepared for Willie Monroe, who is a southpaw, so there won’t be that much difference facing Korobov,” said Charlo. “There is a size difference. He’s taller than Monroe, but I’ll just have to adjust my game plan. The best fighters in the world are the ones who are able to make the best adjustments. Beating Korobov is going to make the victory that much sweeter due to this adversity. That means the celebration is going to be sweeter as well. He was fighting on the undercard, so he’s prepared. But now fighting for the title in the top spot is going to make him fight harder. I love it. He’s a much better opponent on paper than Willie Monroe Jr.”
“I was training to fight on this card so I am physically and mentally ready to fight,” said Korobov. “It doesn’t matter that I am taking this fight on a week’s notice because I have been preparing for this moment my entire life. I will make a few adjustments for Charlo and make the most of this opportunity. Don’t miss it. Make sure you tune-in to FOX for a great fight.”
The Charlo vs. Korobov bout is part of a blockbuster PBC on FOX show that features the Charlo Twins defending their world titles and a heavyweight showdown between Dominic Breazeale and Carlos Negron beginning at 8 p.m. ET/5 p.m. PT. Jermall Charlo, who won a coin toss with his brother, will close the show in a 12-round WBC middleweight championship bout against Korobov, while Jermell Charlo will battle Tony Harrison in defense of the WBC Super Welterweight World Title.
Korobov (28-1, 14 KOs), who was originally scheduled to face Colombia’s Juan De Angel, has an outstanding resume that includes a unanimous decision victory over current super middleweight world champion Jose Uzcategui in 2014. His lone loss came against Andy Lee in a middleweight championship fight in 2014. Korobov was ahead on all three judges’ scorecards when he was caught by a right hand from Lee that resulted in a sixth round TKO loss.
The 35-year-old southpaw is from Orotukan, Russia and now lives in St. Petersburg, Florida. As an amateur he won the European Championships in 2006 by defeating reigning undisputed cruiserweight champion Oleksandr Usyk. He was a member of the 2008 Russian Olympic boxing team and finished his amateur career with a record of 300-12. He enters this fight with four straight victories, having most recently scored a unanimous decision over Jonathan Batista.