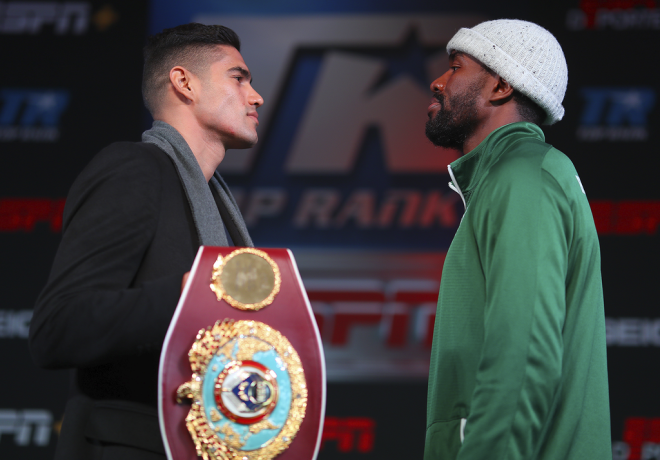 The two will renew acquaintances

At Wednesday’s final press conference, this is what the fighters had to say.

“I dominated that fight. This fight will be no different. It will be only one side. My side.”

On returning to Corpus Christi, where he knocked out Habib Ahmed in February

On a potential Canelo Alvarez fight

“I need to beat Jesse Hart and he needs to beat Rocky Fielding. Mexican versus Mexican, everybody would love to see that. If he wins and I win, let’s do it!”

“Things will be different because we corrected the little mistakes that didn’t go right the first time. I think with the mistakes that {trainer} Fred Jenkins corrected with me, and being on that stage and on that platform, I believe you will see a change in the outcome.”

On fighting for his father/trainer (Eugene “Cyclone” Hart, who won’t be attending the fight because of an illness)

“It means everything for my dad, to myself. Like I said, since I started boxing, me and my dad, we never dreamed of nothing else but being a world champion. I’m very blessed and very humbled by this opportunity I have again. I’m just going to go out there and put on the best performance I possibly can to bring home the victory.”

Manuel Lopez On fighting as the co-feature

“It’s a huge blessing, for sure, and the fact that I’m going to be right before my main man here, Jesse Hart, makes it a whole lot better. We went to school together, so it makes it an even better opportunity. I’m very, very happy about it.”

On what it will take to beat Barboza

“It’s going to take hard work as it’s been. Hard work, dedication, and hopefully it will happen

on Friday night. His birthday present is going to be his first ‘L.'” (Barboza’s birthday was Dec. 9) Arnold Barboza Jr. On fighting as the co-main event and potentially fighting for a world title in 2019

“We just put our head down and train. We’d been getting ready for a fight in November, which got moved to December. We’ve been training since our last fight ( a KO victory

August 25 against Luis Solis). I wand to thank Top Rank for giving me the opportunity. I feel like I’ve passed every test that they’ve given me. From Mike Reed to tall fighters, pressure fighters, everything. He says he’s gonna give me a birthday present. My birthday present is gonna be celebrating my win. I’m going to look better than I ever have. I’ve been training the best I ever have, and I’m read to go.”

“It definitely exceeded my expectations and my team’s. Top Rank has done a great job of moving me and I think given me the right fights, too, kind of just testing my skills and seeing where I’m at. I think that’s exactly what this next fight is going to be. They want to see where I am and see how much they can step me up in 2019, so I want to show them that I’m ready. I hope they keep me just as busy.”

On training in Colorado Springs alongside people like Jamel Herring.”

“I think it’s just the environment that makes it more exciting because I came from Team USA, where I’m training around teammates and it’s always a fun atmosphere. When you turn pro, sometimes you lost that team environment. Being able to train around fellow Olympians like Jamel, {in addition to} Terence Crawford, and still being close to the {U.S. Olympic} Training Center, it definitely keeps it exciting and more fun.”

“It’s been great. As you can see, the proof is in the pudding. {From} my first fight with them and Top Rank back in May until now, we’ve been getting better. Like I said, the chemistry is great. I’m happy and honored to not only be with my new {training team}, but with Top Rank as well. We’re looking to close out the year strong and move on to bigger and better things in 2019.”

Joshua Greer Jr. On fighting for a regional title belt

“It feels good. All the hard work is paying off. I gotta thank Top Rank for the good job they’re doing, and I’m going to continue to do my part.”

On what he’s going to bring to the ring

“I got something real special for him. A new pillow. I went pillow shopping, so everything is going to come together.”