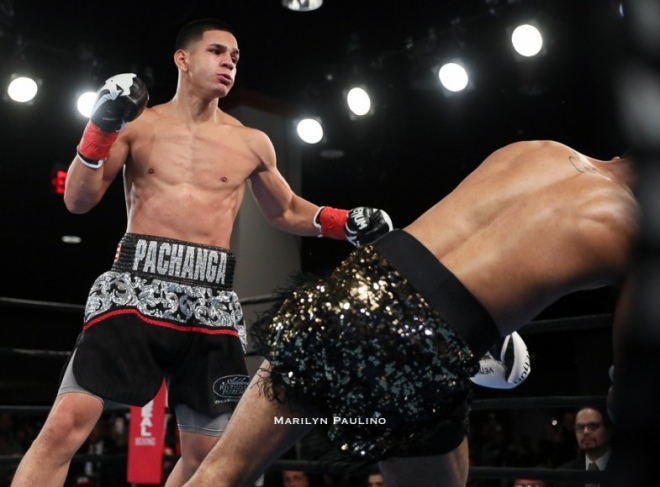 WATCH EDGAR AND THE ENTIRE CARD LIVE THIS SATURDAY AT LIVE.DBE1.COM

This Saturday, September 29th in Brooklyn, New York at Kings Theatre, three of New York’s premier promoters DiBella Entertainment, Uprising Promotions and The Real Deal Boxing will come together for a special edition of Broadway Boxing, showcasing some of the best prospects in the city including Justin Biggs, Jude Franklin, Josue Vargas, Melissa St. Vil and more.

One of the fighters on the card generating massive buzz in New York’s boxing scene is none other than The Real Deal Boxing’s very own Edgar Berlanga (8-0, 8 KOs) who has won every professional fight of his career by first round knockout.

Berlanga was last seen headlining at Kings Theatre during Puerto Rican Pride Weekend in June where he scored a brutal first round KO of rugged and experienced veteran Aaron Garcia who had never been stopped before. Now at only 21 years old, Berlanga is starting to create the rare excitement amongst fans that is only generated by fighters who have that special ability to end a fight with one single shot.

With all of his fights averaging 90 seconds (sound reminiscent of any other young Brooklyn born prospects of the past?) and amassing a following in New York’s Puerto Rican community, the middleweight blue chipper is on the verge of taking the boxing world by storm.

We caught up with the young knockout artist for a few quick questions about his KO streak, his favorite fighters and what his plan is if he ever sees a second round.

You’ve never had an opponent make it to the second round. Are you hoping this fight goes more than one round?

Hell no. All the work that you put in at the gym should make the fight easy. If he goes in the first round like everyone else, the quicker we outta there and getting ready for the next one.

You’ve fought some solid veterans and even a few undefeated young fighters but since you stopped them in the first, do you get a lot of criticism that your opposition has been weak?

Oh yeah. I get that a lot. That I’m fighting bums. I’ve been in there with veterans. People that are supposed to give me rounds but when they go in the first, what can I do? I’m not going wild and trying to take their head off either. I’m trying to box and look for opportunities. It’s a no-win situation. I fight a guy and stop him in the first, he’s a bum but guaranteed if I go the distance, everyone will say that I’m not that big a puncher.

(Laughs.) Yeah, I guess it could be worse.

That’s my dream. That would be a dream come true. Dreamed about it since I was a little kid. That would mean more to me than winning a world title. That’s my goal in this sport.

When do you think you’ll be ready for a Top 20 fighter?

Hopefully by next year. I’d like to be 10-0 before the year is over. Up the competition level in early 2019 and then late next year and early 2020 start going after the Top 20 guys and get a world ranking.

Are you the hardest punching prospect in boxing?

I believe so. I’m sure there are guys who have 8 knockouts but not sure if they are all in the first round especially against guys like Aaron Garcia who had never been stopped in like 20 fights.

When did you know you had that type of power?

Around the end of my amateur career. My body started maturing and I started to notice I was hitting a lot harder. I told my coach I want to start knocking people out. Dropped some guys in sparring then did it in the amateurs and now I’m doing it in the pros.

If you weren’t boxing what would you be doing?

I have no clue. I wouldn’t be in the street. I know that. Probably just have a regular job. Thank God my dad made me go to the gym even when I was younger and didn’t want to for a while. If it wasn’t for that who knows.

Couple quick questions to let people get to know you a little more. Who’s your favorite current fighter?

Miguel Cotto. I was just a little kid when I saw him at the Garden. Had my little headband and everything. I was hyped up. Changed my life.

I know you’re a Cotto man but do you think he’s Puerto Rico’s all time greatest?

Rocky 4 with Drago. I’m pumped to see the new Creed, Drago is coming back.

What kind music you listen to?

So, what are you gonna do the first time the bell rings for the end of the first round and your opponent is still standing there?

Keep with the game plan. Not worried at all about going rounds. Hopefully I can get some rounds this time for everyone to see my skills. I’ve been sparring 8 to 10 rounds so I’m not worried about conditioning. There’s more tools in my box to display. I know I have the rep of just a puncher but I’m really more of a boxer-puncher.

So could the streak end this weekend when you let your opponent get out of the first so you can get some rounds in?