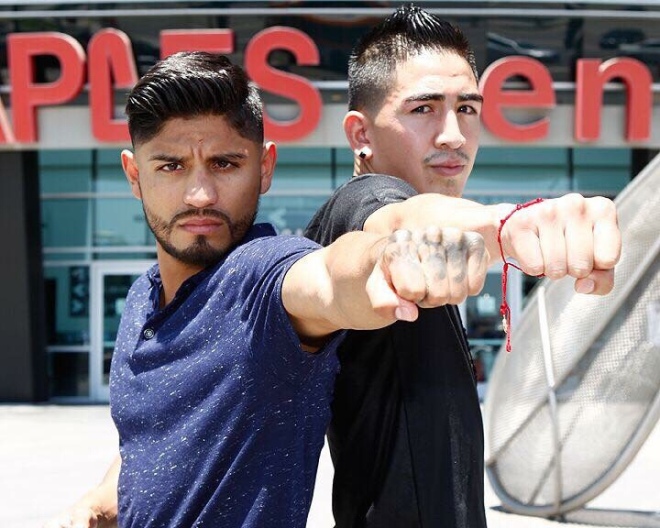 NEW YORK – The first matchup between Leo Santa Cruz and Abner Mares was an instant classic, with the fellow three-division champions combining to throw more than 2,000 total punches in one of the best fights of 2015.

Santa Cruz and Mares further solidified themselves as the most active and exciting fighters in boxing in their first showdown, combining to throw over 170 punches per round, more than 50 above the featherweight average at the time.

With the long-awaited rematch between set to take place this Saturday live on SHOWTIME® from STAPLES Center, they once again rank amongst the best fighters in boxing.  According to CompuBox, Santa Cruz and Mares rank in the Top 10 in three key statistical categories amongst all active boxers across weight divisions – Average Total Punches Landed Per Round, Average Power Punches Thrown Per Round, and Average Power Punches Landed Per Round (See text box below for statistical overview).

When it comes to power shots, which is defined as anything that isn’t a jab, Santa Cruz and Mares rank No. 4 and No. 7 in power punches thrown per round and No. 2 and No. 6 in power shots landed per round, respectively.

Additionally, Santa Cruz ranks in the top-three in average total punches thrown per round, one of only three active fighters to average 80 or more punches, along with Roman Gonzalez and Francisco Vargas.  Santa Cruz, with a stellar 13-1 record in world title fights, also excels at jabbing, ranking in the top 10 in average jabs thrown per round and average jabs landed per round.

While it seems Santa Cruz has the statistical edge in their rematch, the difference maker could be Mares’ rebirth since teaming up with trainer Robert Garcia.  Since training under Garcia when he dethroned Jesus Cuellar in 2016, Mares is connecting at a higher percentage on his power shots (46.9 percent compared to 40 percent in his previous 12 fights) while simultaneously limiting the accuracy of his opponents.

The sample size is small, but Mares, who owns a 7-2-1 record in world title fights, is confident the addition of Garcia, along with his mental toughness, will be the difference maker.

“I can’t go in with the same exact mentality as last time and try to knock Leo’s head off,” Mares said recently.  “I have power, but I’m not a one-punch knockout artist.  The difference between our fight in 2015 and now is that I’m a more mature and seasoned fighter.  I’ve been in this sport a long time, and now with having Robert Garcia in my corner, he’s really helped my mental game and given me great guidance.

“We knew last time, and we know going into this fight, that Leo is a volume puncher. He comes forward and tries to tire you out.  But I know that he’s also a vulnerable fighter and I just have to take advantage of it this time.”

While the crowd-pleasing Santa Cruz and Mares may come to the ring with revised game plans for the rematch, Santa Cruz recognizes that everything can change when you get in the ring.

“He says he’s going to box me more this time, but it’s easier to say that than do it,” Santa Cruz said recently. “When you get in the ring and hear the fans, they make you want to brawl. Once you hear the crowd you want to entertain them. You love to hear the people scream.

“I’ve learned a lot since the first Mares fight.  I’ve learned how to adjust during a fight better.  I’m a more complete fighter and it’s going to help me look even better this time.”

Tickets for the live event, which is promoted by Ringstar Sports and TGB Promotions, begin at $50, plus applicable fees, and are on sale now. To purchase tickets visit AXS.com or click HERE.

Rank Amongst All Active Boxers Across Weight Divisions

Avg. Total Punches Thrown Per Round

Avg. Total Punches Landed Per Round

Avg. Power Punches Thrown Per Round

Avg. Power Punches Landed Per Round

Avg. Jabs Thrown Per Round

Avg. Jabs Landed Per Round