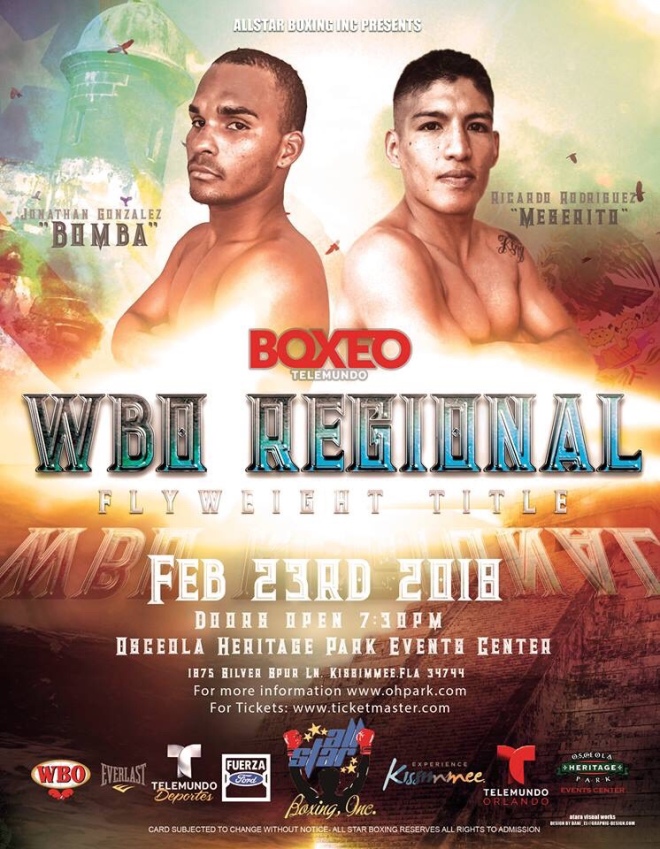 Keeping its yearly series tradition and earning the title as the longest running boxing show on U.S. Hispanic Televison celebrating its 30th anniversary. Promoter of the series Felix “Tutico” Zabala of All Star Boxing INC, has announced the premiere’s title fight featuring a Flyweight Showdown of Puerto Rico Vs. Mexico as Jonathan “Bomba” Gonzalez of Caguas, Puerto Rico squares off against Ricardo “Meserito” Rodriguez of Mexico City, Mexico, 10 rounds for a WBO Regional Belt.

The recent natural disaster of Puerto Rico has left many on the Island devastated. As everyone continues to recover,Jonathan “Bomba” Gonzalez(19-2-1 12KO’S) who recently signed with All Star Boxing Inc, has used the disaster as a motivation to fight for all those who have been affected and is ready to make his Telemundo debut. Nicknamed “Bomba” because of his past explosive knockouts, he is looking to bring the same power he has used in the past come February 23rd.

Meanwhile, Mexican title contender Ricardo “Meserito” Rodriguez(16-5-0 5 KO’s) looks to erase his past 2 performances, losing by 6th round Knockout to superstar Naoya “Monster” Inoue and later dropping a 10 round unanimous decision to Daniel Lozano. Rodriguez has decided to take his career in a new direction by campaigning in the Flyweight division and wants to extend his undefeated winning streak versus Puerto Rican fighters hosting a 5-0 record in regional title fights.

Tickets: Ohpark.com or at the Box Office/ ticketmaster.com