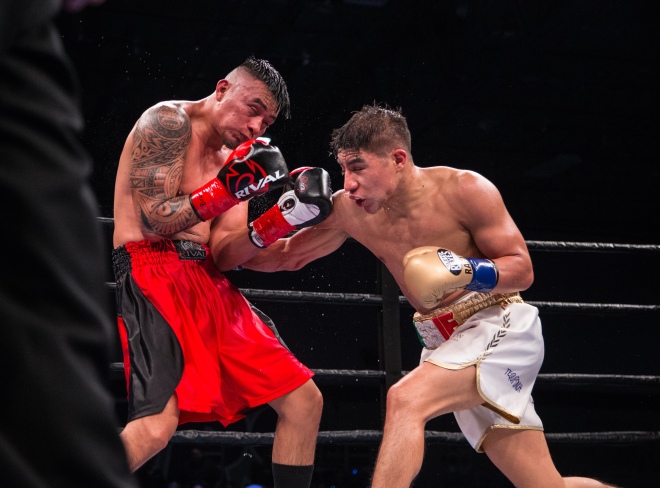 “I’m very happy to be back after a long layoff,” said Vargas. “It was a long time off and I felt the ring rust. I stayed patient and tried to stick to my distance. The inconsistencies affected me more than I thought it would and Herrera kept pushing the fight.

“I was setting him up and waiting for him to punch before attacking him. I expect more in my next performance and I’m disappointed I didn’t finish him, but a win is a win. We’ll get back to the drawing board. I showed I have the power with the knockdown, I just have to finish it off next time.”

Vargas was effective early and often, landing a strong lead left hook to the head of Herrera at the end of round one before controlling the second round with series of combinations. Herrera slowly increased his output as the fight went on, but was never able to slow down the attack of Vargas.

Midway through round six, Vargas sent Herrera to the canvas with a left hook that initially stunned him and a combination that put him down. Herrera rose to the canvas but continued to be picked apart by the skilled and composed Vargas.

“I felt relaxed in the ring,” said Vargas. “I was trying finish him with the hook. His head movement threw me off and kept him in the fight. We have to keep improving and look better in the next fight.”

After 10 rounds, Vargas earned a unanimous decision by the score of 100-89 three times in his first fight in 13 months as he seeks another title in the welterweight division.

“I’m ready for anyone,” said Vargas. “I’m going to start preparing tomorrow for anyone. I’m looking forward to facing Keith Thurman, the Errol Spence Jr. vs. Lamont Peterson winner, or Danny Garcia. I’m back and I’m ready to stay busy and get back in the ring as soon as possible to reach my goals.”