NEW YORK CITY – On a night that Madison Square Garden and the boxing world bid farewell to a boxing legend in Miguel Cotto (41-6, 33 KOs), Sadam “World Kid” Ali (26-1, 14 KOs) stole the show, winning a unanimous decision victory and the WBO Junior Middleweight World Championship in front of 12,391 fans and televised live on HBO World Championship Boxing. The final scores were 115-113 twice and 116-112.

Ali, a 2008 U.S. Olympian from Brooklyn, hurt Cotto twice in the early rounds and used slick defense and solid counterpunching to keep Cotto at bay throughout the 12-round bout.

“I worked hard for it,” Ali said. “I took advantage of this fight, and I made sure to make it count. I want to Thank God, and also thank team Cotto, They could have taken an easier fight if they wanted too. I had him hurt here or there in the first couple of rounds. I knew I had to do something, or he would have dug in. By the 11th round, I thought the fight was close. Whatever Golden Boy Promotions has next, I’ll take it. Good things happen to good people. I have been training since I was eight years old, and I am glad I got this win at MSG, in my hometown.”

Cotto, a six-time, four-division world champion and the fighting pride of Caguas, Puerto Rico confirmed his retirement after the bout.

“I am feeling good with the performance,” Cotto said. “Something happened to my left bicep in the seventh round. I don’t want to make excuses, Sadam won the fight. It is my last fight. I am good, and I want to be happy in my home with my family. Thank you for all the fans. I am proud to call MSG my second home. I had the opportunity to provide the best for my family because of the sport.”

In the co-main event, despite suffering severe gashes over both eyes caused by accidental headbutts, WBC Super Bantamweight World Champion Rey Vargas (31-0, 22 KOs) defended his title a second time,rolling to a 12-round unanimous decision victory over a very game Oscar “El Jaguar” Negrete (17-1, 7 KOs). The scores were 119-109 twice and 120-108.

“I am glad that we got the win, and I continue being unbeaten with my belt,” Vargas said. “It was difficult finding my rhythm at the beginning of the fight, and the cuts did not help. I have the humility to say that I made my share of mistakes, but I feel that Negrete fought very dirty, and was not a very good boxer.” 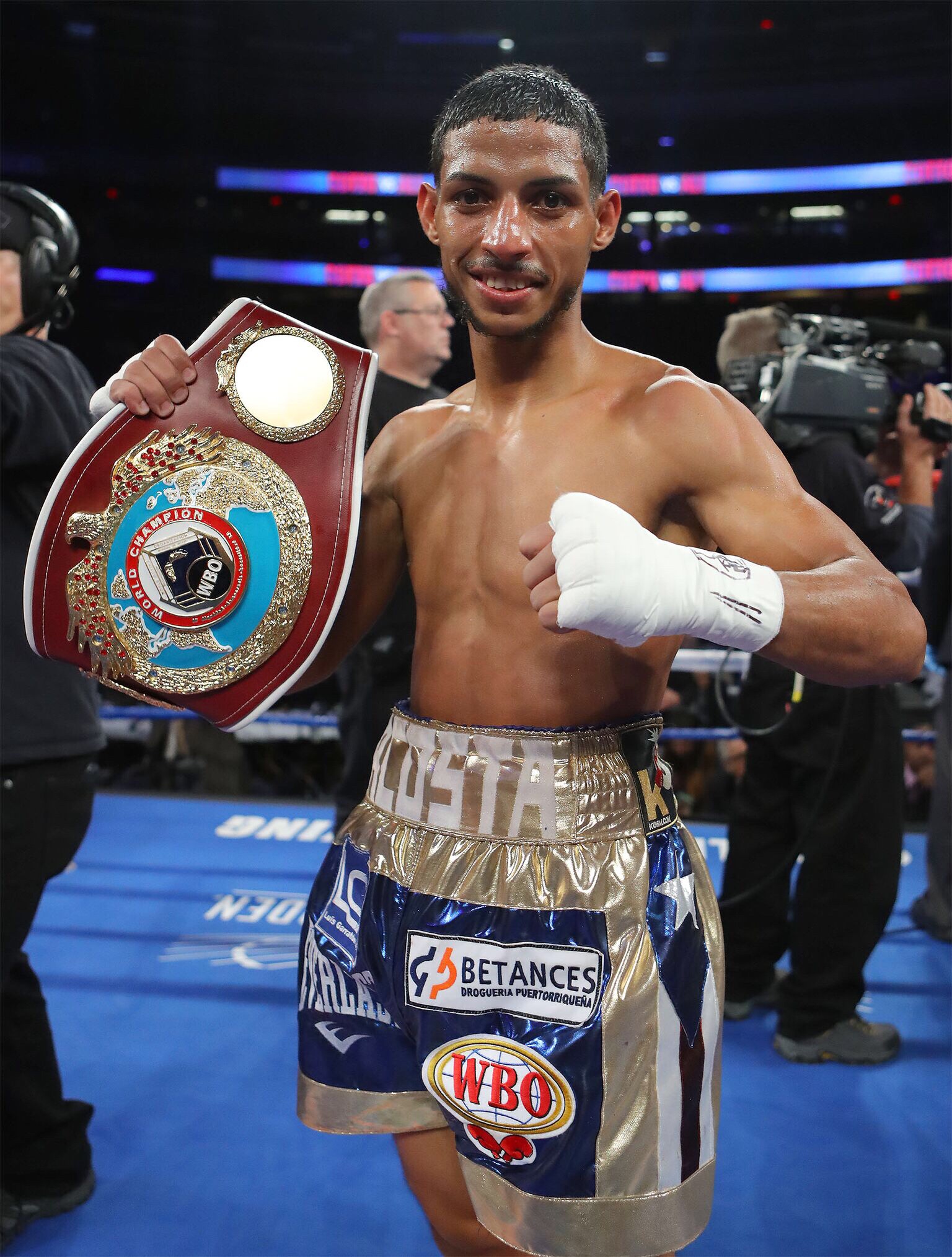 In a battle pitting Puerto Rico against Mexico for the vacant WBO Junior Flyweight World Championship, Angel “Tito” Acosta (17-1, 17 KOs) of San Juan, Puerto Rico landed huge shots throughout the early and middle rounds before knocking out Neuvo Leon, Meixco’s Juan “Pinky” Alejo (25-5-1, 15 KOs) with a vicious left hook in the 10th round of a scheduled 12.

“It’s taken me five years to get here, and I’m cherishing this moment for me and for Puerto Rico,” Acosta said. “I’ve learned a lot since my last fight for a world title against Kosei Tanaka, and this fight proves that I learned and fixed all I needed to win a world championship. My next steps will be up to my promoters, but I know I am in good hands.”

“It was an ugly win, but we got to accomplish it on the undercard of Miguel Cotto,” Rios said. “He was a southpaw, with an awkward style. He was also a veteran, so he had his little tricks. Overall, this was a huge motivation, and I’m just glad to get back in my groove.”

“This puts me in a great spot in my career,” Ochoa said. “I was shaking off a lot of dust since I haven’t been able to fight consistently, but this proves to me that I’m still worthy of the sport. I still have work to do, but when I was able to land my shots I was able to connect them crisp and effectively. I hope that I’ll be able to fight a lot more this year.”