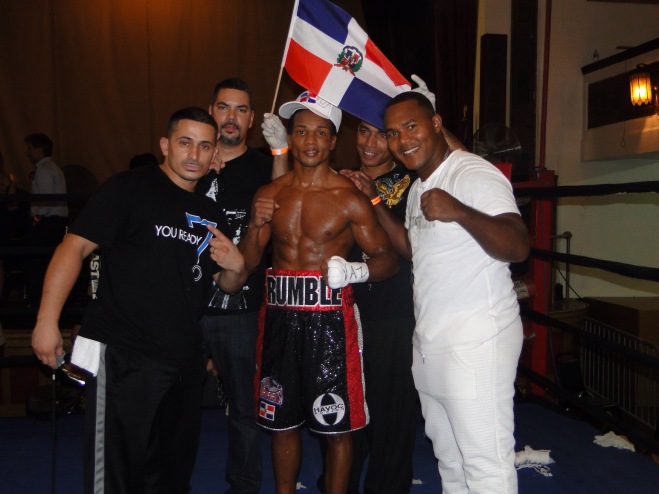 Brooklyn, N.Y. –  Ronson Frank’s Uprising Promotions returned to the Brooklyn Masonic Temple on Friday night, putting on another exciting night of boxing that was highlighted by four consecutive stoppages to close out the show. In the main event of the evening, featherweight Yenifel Vicente (27-3, 19 KOs) broke down Manuel de los Reyes Herrera (21-17-1, 15 KOs) over two rounds before finishing him off in the third frame.

In that feature attraction, Vicente opened the first round by feeling out Herrera before he threw an accidental low blow that seemingly had the fight in jeopardy for a few minutes as Herrera laid on the canvas. Action did eventually resume, and Vicente began focusing on a body attack before dropping his opposition with a flurry just before the close of the second frame.

In the third stanza, Vicente sensed the blood in the water and immediately put Herrera on his back again with overwhelming volume to start the round. Herrera got himself back to his feet, but Vicente did not let him off the hook. First, he hurt Herrera on the ropes with a straight right hand before turning on punches to both sides of the body that were having a major effect. Herrera tried to retreat but soon found himself victim of a perfectly timed right hook that dropped him for a third time. He attempted to get back to his feet, but referee Steve Willis was forced to stop the bout when he stumbled at the count of 10. The official time of the stoppage was 1:01 of the third frame.

Scott Burrell (10-2, 7 KOs) upped his win total to double digits in the co-feature bout of the evening against Moris Rodriguez (5-7-1, 3 KOs), doing a nice job of working behind the jab while cutting off the ring. He also did well in switching levels, and his early commitment to the body helped him set the table for a left hook in the opening minute of the second round that brought the beginning of the end for Rodriguez. After seeing his left hook hurt his opponent, Burrell jumped into confrontation with well-placed shots to the head and body that soon after forced the referee stoppage. The fight was officially waved off at the 1:52 mark of the second frame.

In a scheduled four-round welterweight affair, Julian Sosa (2-0-1, 1 KO) needed very little time to dispose of Jose Sanchez (0-2), who wildly tried to attack Sosa at the opening bell before quickly gassing himself out. Sanchez was clearly in trouble early as Sosa immediately began to pick him apart, dropping him midway through the first frame with a four-punch combination. Sanchez would continue briefly, but Sosa quickly closed the show at 2:17 of the opening round after finishing off a flurry with a hard left hook.

Cruiserweight Joseph Williams (7-0, 6 KOs) had his impressive power on display on Friday night, needing just 2:47 to shut down Michael Wilmer (5-8-1, 4 KOs). In fact, Williams dropped Wilmer with the first punch he threw in the fight, a punishing right hook just seconds after the first bell. Williams did a nice job of working levels to quickly break his opposition down, and every punch had bad intentions. In the final minute of the opening frame, Wilmer went down for a second time following a hard right hook to the body, and referee Steve Willis waved it off seconds after action resumed when Williams had him on the canvas for a third time after another big flurry.

Junior middleweight Matthew Armstrong (1-0, 0 KOs) was victorious in his professional debut against Anton Williamson (1-4, 0 KOs), receiving a huge avail from his hometown Brooklyn fan base when he was introduced. While Williamson hung in tough, Armstrong was clearly the more polished fighter and showed better ring generalship while landing the cleaner shots over four rounds of action. After the final bell, he took the unanimous decision with tallies of 40-37 and 40-36 twice.

Welterweight Carlos Adams (1-0, 0 KOs) also made his professional debut on Friday night, taking on a game Jeff Souffrant (1-1, 0 KOs) in a four-frame bout. Souffrant was a tough competitor, but Adams showed great quickness and power, coming in numbers when he got off his punches. He picked his shots intelligently throughout the encounter and never let Souffrant gain any type of momentum, also displaying a bit of showmanship at times. When the final round concluded, this fight headed to the cards where Adams took the unanimous decision by counts of 40-35 and 40-36 twice.

A third professional debut was also on the slate at the Brooklyn Masonic Temple, with middleweight Nikita Miroshinchenko (1-0, 1 KOs) facing a tough as nails Sean Nurse (0-2). Miroshinchenko applied relentless volume, landing a continuous series of right hooks. Nurse ate up the punches and continued to come forward until a flurry of hooks from Miroshinchenko in the waning seconds of the third round caused referee Steve Willis to step in and stop the bout, much to the dismay of Nurse and his team.

Middleweight Villi Bello (3-1, 1 KO) continued his successful transition from mixed martial arts into boxing, landing a thunderous right hook 17 seconds into the first round of a fight with Francisco Cruz (0-3) that violently flattened his opponent for an immediate stoppage.

The opening fight of the night was a bit of a shocker, with Louisiana knockout artist Alvin Varmall, Jr. (6-0-1, 6 KOs) being forced to settle for a majority draw with gritty veteran Lamont Capers (5-7-1, 0 KOs) of Brooklyn. Varmall approached Capers with a Tyson-esque head movement but was never able to get off the kind of shots he landed in his first six professional bouts. Capers pulled Varmall into the clinch anytime he got close and just never allowed him to get going. When the six frames of this bout concluded, the cards read 58-56 (Capers) and 57-57 twice to deem it a majority draw.