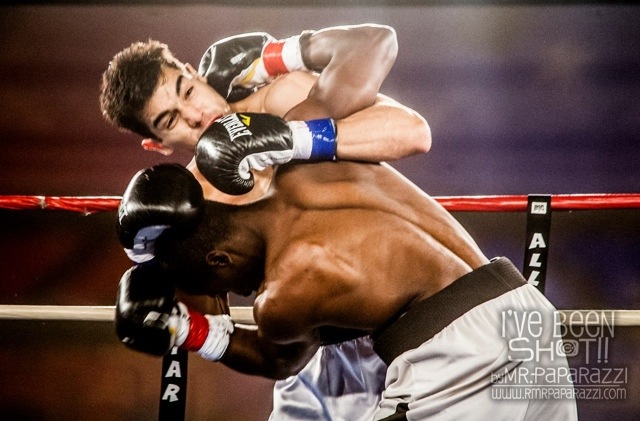 Angel “Blanco” Martinez scrappy but un-victorious in his 6 round scrap against Aaron “Jedi” Jaco who fought with dramatic fashion for the local fans did enough to impress the judges 60-54,58-56. 60-54 all for Jaco in unanimous decision win.

Super flyweight Daniel “El Alacran”Lozano (12-1, 9 KOs) scored an eighth round KO over Antonio “El Tostado”Tostado (13-3, 6 KOs) on Friday night at the A La Carte Event Pavilion in Tampa, Florida. All Star Boxing showcased an exiting Boxeo Telemundo fight night. Lozano came out very agressive stept right in from the start with a nice hook showing his power landing hard shots to Tostado’s body who made adjustments with good counter punching shooting a nice uppercut Lozano took well. Both fighters exchanged with fireworks throughout the fight but Lozano just appered physically stronger in there I gave Tosdado a lot of credit for staying in close landing high percentage shots until Lozano crushed him with a right hand and hard shots that dropped Tostado three times in round eight to end the fight and claim the WBO interim Latin Super Flyweight title.

By Damon “Latinbox”Gonzalez
Noemi Bosques (6-1, 2 KO’s) from St.Petersburg, Florida. makes Yolaine LinDeLauf (6-2, 2 KO’s) pay in the counter punching as Bosques settled and out worked LinDeLauf who was gain but walked right into Bosques power shots. It didn’t take long as Bosques landed a key right hand that rocked LinDeLauf sending her to the canvas after referee Sam Burgos issued the count Bosques jumped right back on LinDeLauf throwing combinations that floored her again ending the series at 1:23 seconds of round three giving Bosques the victory as the new NBA Flyweight champion.

Punches have a unique mentality, as evidence by flyweight Daniel “EL Alacran” Lozano (11-1, 8 KO’s) over the course of 6 years Lozano has been entertaining the supporting fans at the A La Carte Pavilian in Tampa, FL. with exiting hard fought fights Lozano faced with a set back in October 2013 coming back to the ring after a very long layoff due to contract issues Lazano fell short by loosing to Mathew Villanueva .

Lozano your typical mexican warrior still considered a threat in the flyweight division no question fights aggressively and is a legitimate puncher in the ring. Lozano looking to score his 12th win tonight against Antonio Tostado (13-2, 6 KO’s) for the WBO Super Flyweight title, Lozano made very good decision for his career and family by taking more indept responsibility by oversing his career He signed a promotional deal with Felix “Tuto” Zabala,Jr. Promoter of All Star Boxing, Inc. Lazano totally pleased by the outcome and focuses more now on preparing to do his job in the ring.